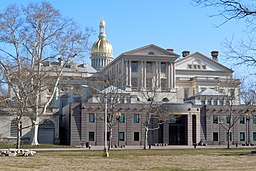 The program establishes a regional cap on the amount of carbon that fossil-fuel-based power plants can emit and then regulates those emissions by issuing a limited number of tradeable CO2 allowances. States participate in quarterly CO2 allowance auctions, which generate proceeds that they can then invest in energy efficiency and renewable energy measures to further reduce their carbon emissions.

The NJ governor, First Lady Tammy Murphy, NJDEP Commissioner Catherine McCabe, a crowd of state environmental leaders and activists, and members of the Murphy administration joined together in Atlantic Highlands, which had been destroyed during Hurricane Sandy five years ago, to celebrate this significant action on climate.

“This effort is a tremendous example of state action in the face of climate denial and rollbacks of critical climate programs at the federal level. The nation’s best regional climate program just got better, thanks to Gov. Murphy,” she said.

According to McGimsey, RGGI has cut greenhouse gas emissions in half from 2005 levels, raised more than $2.78 billion dollars, which includes more than $1 billion in investments in energy efficiency and $270 million for clean and renewable energy investments.

“While Republicans and Democrats in Washington engage in name-calling, the governors in RGGI states are showing how bipartisanship works: five are Republicans, five are Democrats, and all of them agree we need to reduce carbon pollution. They have shown that leaders of both parties can work together to deliver significant benefits for their constituents. The air is cleaner, our communities are more secure, and lives continue to be saved, thanks to the courageous and visionary leaders of these ten states,” she added.

Environment New Jersey Director Doug O’Malley, who served on the transition team for the new governor and attended the event and said in a statement that the announcement is a “shining light in the darkness of climate rollbacks of the Trump era.”

While campaigning for governor, Phil Murphy also pledged to put New Jersey, a state with a population of 8.9 million people, on a path to get 100 percent of its energy from clean sources by 2050.