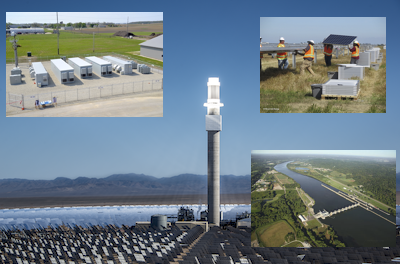 The owner of DOE-backed Crescent Dunes solar power project in Nevada has filed for bankruptcy. Developer Tonopah, a subsidiary of SolarReserve, signed a 25-year PPA with NV energy back in 2009, before the project was built. It was slated to the first concentrating solar power (CSP) projects paired with molten salt energy storage in the U.S. and was selling energy at a price of 13.5 cents per kilowatt-hour. (Today that price is closer to 3 or 4 cents per kWh).

Crescent Dunes uses mirrors to concentrate solar energy and use it to heat molten salt flowing through an approximately 640-foot tall solar power tower. The high temperature molten salt circulates from the tower to a storage tank, where it is then used to produce steam and generate electricity. Excess thermal energy is stored in the molten salt and in theory could be called upon at any time to create energy for up to 10 hours after the sun sets.

Various news outlets are reporting that the storage tanks were problematic from the start and the plant had stopped generating electricity in April of 2019.

Crescent Dunes was the recipient of a $737 million loan guarantee from the U.S. department of energy in 2011. In 2014, the project was complete and entered the commissioning phase and in 2016, Renewable Energy World recognized it as a finalist for a Project of the Year Award.

The Department of Energy reportedly announced today that it negotiated a $200M repayment from the owners of the project, which still owe more than $400M to the U.S. government. Department of Energy Spokeswoman Shaylyn Hynes told the Las Vegas Review Journal that the deal must be approved by bankruptcy court.

“This project has consistently faced technical failures that have proven difficult to overcome. The department’s decision was made after years of exhausting options within our authority to get the project back on track, given the significant taxpayer investment the prior administration committed to this project,” she said in the article.