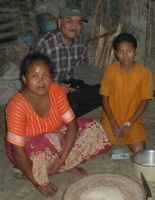 Kathmandu, Nepal [RenewableEnergyAccess.com] About 96,000 of the total 4.1 million households in Nepal live in total darkness during the night without access to any source of energy that could produce light. Another 2.4 million households depend solely on oil-wick tukis, kerosene lamps that are dim, and release fumes that are both harmful to human health and add to greenhouse gas emissions. The Center for Renewable Energy has a solar solution.

To shed light on the darkness and improve the health of rural villagers in Nepali households, the Center for Renewable Energy (CRE) has introduced a solar-based household lighting (solar tukis) campaign, using the slogan ‘Light for All.’ Solar tukis are portable solar lamps that use white light emitting diode (WLED) bulbs. Armed with these devices CRE’s aim is to completely eradicate the use of kerosene-based lamps from Nepal. The technology behind solar tukis is simple: the WLED lamp comes with rechargeable nickel metal hydride batteries, a three watt (3W) solar panel and a three volt (3V) accessory to connect an AM / FM radio. Users can leave the lamp in the sun all day long and it will work continuously for ten hours at night. “The oil-wick lamps we used at home before solar tukis were a nuisance,” said Ram Saran Magar of Lalitpur Dalchoki. “I have two small kids who used do their homework at night under oil-wick tukis, they were straining their eyes and there was always the possibility the tuki may catch fire.” In addition to health and safety benefits there are potential economic returns for Nepal. The Kyoto Protocol global climate treaty entered into force in February 2005 allowing countries like Nepal to start trading the carbon dioxide not emitted by using solar tukis and earn up to $100,000 a year. The Clean Development Mechanism established under the United Nations Framework Convention on Climate Change makes this trading possible. The industrialized nations can buy such credits to compensate for the extra greenhouse gases they produce over the allowances set by the Protocol. “One household may not contribute much to the country’s emissions, but when one thinks about 2.4 million households burning three liters of kerosene the situation becomes completely different,” says Babu Raja Shrestha, President of CRE. “Our project is about helping the poorest of the poor but it is also about helping the country earn carbon credits.” Prem Sagar Subedi, Micro Finance Officer at Winrock International, Nepal agrees, “Solar tukis are simple in technology and extremely cheap. This project is a unique example of how renewable energy can be made accessible to all.” Winrock International, Nepal has been assisting the ‘Light for All’ by promoting micro finance and also by developing the campaign into a Clean Development Mechanism project. Other renewable sources are not quite as forthcoming. The dream that every Nepali household will have cheap energy from the country’s abundant hydropower resources continues to be elusive. At present the total installed hydropower capacity with Nepal Electricity Authority remains a mere 600 MW. Even if Nepal were to tap its full hydropower potential, it will still not be economically feasible to have every Nepali household connected to the electrical grid due to the country’s difficult topography. Unlike the initial high investment associated with a larger solar home system, which can range from USD $200-300, the solar tukis cost NRs 3,500 (USD $50) with a five-year warranty. Apart from the NRs 300 (USD $5), which the purchaser has to invest every two years to replace rechargeable batteries, no additional cost will have to be borne in the future. With the help of micro finance the purchaser will only have to pay a monthly installment of Rs 150 (USD $2.3) for two years, which is exactly the amount they are paying every month now for kerosene or dry-cell batteries. At the end of two years, the users would be getting light virtually free! “Although it is sometimes hard to convince poor people to use solar tukis,” says Angel Chitrakar, Assistant Program Officer at Environmental Camps for Conservation Awareness (ECCA), an organization that is helping solar tuki project with promotion and coordination, “the response from those who have used them already has been overwhelming.” Earlier this year the solar tuki project was awarded USD $91,400 with the prestigious Development Marketplace 2005 Award for ‘its innovative proposal on solar-based household lighting through integrated approach of community mobilization and technological intervention.’ The project is also a proud winner of USD $46,000 from Global Environment Fund’s Small Grants Program and Nepal Development Marketplace award of USD $19,000. The Center for Renewable Energy expects the solar tuki project expects to reach 100 thousand households within three years, eventually lighting up 2.4 million Nepali households by the year 2015. About the author Mallika Aryal recently moved back to Nepal from the U.S. She works as a newspaper reporter for an English language weekly and lives in Kathmandu. Mallika served as an intern with RenewableEnergyAccess.com during the summer of 2003 and is now a regular contributor to RenewableEnergyAccess.com. RenewableEnergyAccess.com is seeking both domestic and international contributing newswriters to communicate news, trends, issues and policy on Renewable Energy from their home countries. Please follow this link to indicate your interest.