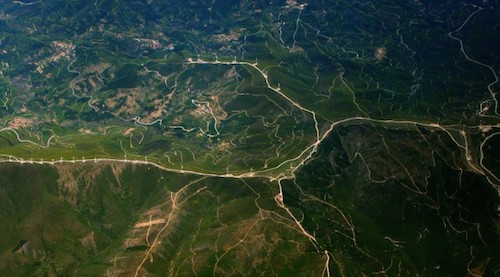 Attending the annual BP Statistical Review of World Energy 2016 launch event in June, I watched BP Chief Economist Spencer Dale invoke lessons from history. “Even if renewables continue to grow faster than any other energy technology in history,” he said, “we are unlikely to meet carbon emissions reductions targets set in Paris last December.”  On its own, ballooning investment in renewable energy technologies is simply not enough to accelerate the transition to a climate-compatible energy future. Instead, it is becoming clear that fundamental electricity grid transformation is key to delivering on Paris climate commitments.

The year is 1878. The city of Paris is hosting the third annual World Fair, featuring the latest in fine art and innovative machinery. For the first time in history, 64 electric street lamps, running the length of the Avenue de l’Opera from the Louvre to the Palais Garnier Opera House, are lit with the flick of a switch. The electricity illuminating the stunned Fair-goers is sold from a utility company not far away, sent through transmission lines emanating from a coal-powered generator. Benefiting from huge demand and economies of scale, electric grids like this grew rapidly, quickly becoming the dominant technology in the global energy market. The fundamental blueprint of these grid systems has changed little for nearly 140 years.

Now fast forward to December 2015. Fueled by an increasingly unanimous scientific mandate and public appetite to mitigate climate change, 188 nations submit action plans, known as “Nationally Determined Contributions” or NDCs, during the landmark COP21 climate negotiations held in Paris. Among other measures, many NDCs outline ambitious targets to rapidly transition national energy grids, nearly all of which still depend heavily on fossil fuels, to renewable and sustainable sources of energy. 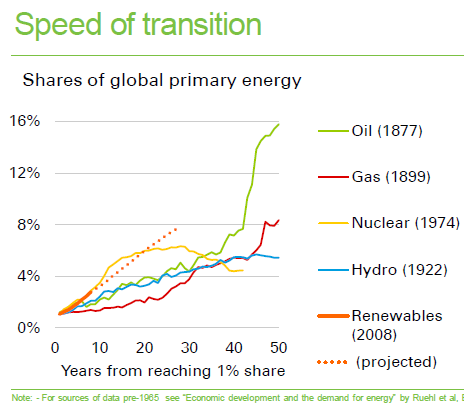 Big changes are already underway. Reassured by strong commitments to clean energy by many governments in the build-up to COP21 and despite the global plunge in fossil fuel prices, private sector investments in renewables are soaring while technology costs are falling. As a result, 2015 easily broke records for renewable energy, with the largest global capacity additions seen to date. The world now adds more renewable power capacity annually than it adds from all fossil fuels and nuclear energy combined. Coupling this trend, carbon emissions from energy consumption have stalled for the first time in nearly a quarter of a century.

The fact remains, however, that these trends must continue to accelerate dramatically to meet climate change mitigation targets. The International Energy Agency’s 450 Scenario sets a benchmark energy scenario consistent with the goal of limiting the global increase in temperature to 2 degrees Celsius by limiting greenhouse gas concentration in the atmosphere to around 450 parts per million of carbon dioxide (CO2). To achieve this target, the 450 Scenario projects global carbon emissions levels falling by 5.5 percent every year for the next 20 years. For context, that is double what we achieved in 2015, every year for the next 20 years.

As they are currently designed, it is highly unlikely that modern electricity systems can displace enough fossil fuel-powered generation to reach, much less sustain, these emissions reduction levels. Putting aside the many socio-economic trends that are projected to create pressure for increased global energy supply, a root cause of this issue is the underlying architecture of electricity grids.

Run nearly exclusively as natural monopolies, these systems have changed little since their invention in 1878. In an electricity system powered exclusively by fossil fuels, nuclear, or large hydropower, this market structure makes a lot of sense. By granting utility companies monopoly rights to provide electricity to consumers, governments can ensure access to affordable and reliable electricity services. Guaranteed a captive market for electricity, private sector utility investors are much less averse to paying for expensive and centralized power plants, electrical grid expansion, and maintenance.

Put simply, conventional electricity systems rely on a fundamental transaction in which utility companies earn a stable monetary return in exchange for supplying electricity reliably for consumers and for their investment in grid infrastructure such as transmission lines and power plant assets. The continued viability of this system, where power flows in one direction, is being threatened as new technologies are allowing both information and electricity to flow back and forth from the grid and electricity consumers.

Living up to their namesake, disruptive technologies are unsettling the balance of conventional grid systems. Rapidly emerging and increasingly affordable technologies and practices—such as distributed renewable energy generation, combined heat and power systems, co-generation, energy storage, micro and smart grids, and demand-side management tools, just to name a few—are allowing electricity customers to begin providing energy assets to the grid themselves. The benefits of this trend should not be underestimated. Aside from their obvious impacts on reducing carbon emissions levels, distributed energy technologies are becoming a critical tool in addressing energy access in underserved and rural areas. 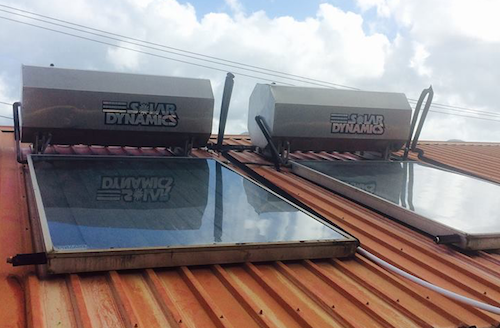 So far, electrical utility companies have clearly been losers in this trend. As new technologies enable ever greater numbers of consumers to defect from the grid or become “prosumers”—providing energy assets to the grid themselves—utilities are losing their ability to earn returns on those assets. Once considered only a theoretical scenario, many utilities are now experiencing the “utility death spiral,” where grid defection is dividing utility maintenance costs among a smaller customer base, driving electricity rates higher and prompting further defections.

Fundamentally, this dynamic pits utilities against consumers and, more importantly, against the drive toward a sustainable energy future. Facing declining and uncertain profit margins, utility companies are unlikely to support initiatives to integrate higher shares of distributed renewable energy, such as rooftop solar. Already, in many cases, utilities actively oppose these efforts.

Utility-Scale Is Not a Silver Bullet

Facing growing public pressure to contribute meaningfully to climate change mitigation, it is understandable that national governments often prioritize large utility-scale renewable energy projects as an efficient way to quickly displace fossil fuel-powered energy generation. This sentiment is reflected in the bias toward large (e.g., megawatt (MW)-scale and up) renewable energy power plants installed in 2015. For example, by the end of the year more than half of global solar photovoltaic (PV) capacity was in projects of 4 MW and larger while the average size for wind turbines delivered to market in 2015 was 2 MW. How these projects can be efficiently integrated into conventional electricity grids, however, is proving to be a critical roadblock to meaningful progress.

China’s growing energy system is perhaps the clearest example of this challenge. Most recently reflected in China’s NDC, which targets supplying 20 percent of electricity demand with renewables by 2030, China is quickly building an impressive track record. The country has installed 145 gigawatts (GW) of wind power alone by the end of 2015. However, nearly 33.9 GW of this electricity went unused in 2015, the equivalent of annual electricity consumption for 3 million American households.

Among other factors, this tremendous waste of wind energy has been directly linked with China’s antiquated electrical grid infrastructure. Nearly 80 percent of the country’s wind power capacity is installed in sparsely populated northern territories, meaning that it has to travel a long way to reach sufficiently large electricity demand markets in the south. Given wind’s intermittency and the lack of sufficient energy storage facilities in China’s grid system, the vast majority of this energy must be consumed as it is produced. Unfortunately, the electricity transmission infrastructure has not kept pace with the rapid growth of wind turbine installations, and much of this clean energy and emissions reduction potential is wasted. 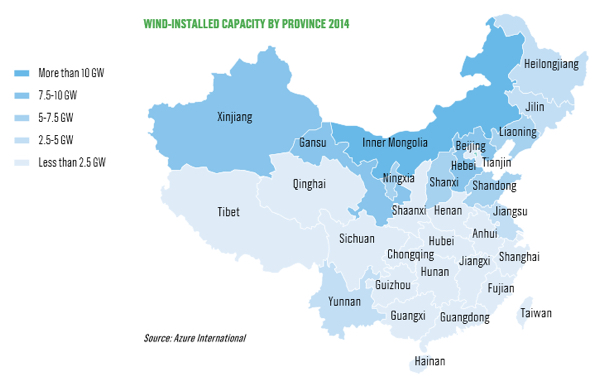 China’s stuttering experience with wind power and the opposition seen globally from utility companies against disruptive energy technologies highlights the need for carefully planned and coordinated grid development. Realistically, this coordination can be achieved only by adjusting financial incentives in the market to align the interests of utility companies with the global push toward sustainability. This re-alignment can, and should, start at the government level with layered policy reform, providing regulations and incentives tailored to specific characteristics and scales of various renewable energy opportunities.

For large-scale renewable power projects, open-market policies such as tendering systems are emerging as a key tool. Tendering systems utilize auctions in which prospective project investors compete to secure a development contract from the government. Investors bid a price per kilowatt-hour (kWh) of electricity produced, representing the lowest possible guaranteed returns needed by the investor from the government to install the power plant profitably. Competitive underbidding ensures that the government minimizes expenditure on the plant itself, hypothetically conserving funds to support transmission infrastructure development. Furthermore, since auctioned project size is pre-determined by the government, tendering policies can ensure that expanded generation is coordinated with regional supply needs and network expansion constraints. In Brazil, these systems have reduced wind farm installation costs by 44 percent from 2009 levels and are being used to integrate unprecedented levels of solar in India.

For small-scale distributed renewable energy generation, net metering policies are already becoming widespread, requiring utility companies to compensate prosumers for excess electricity supplied to the grid. Criticism of these programs has noted that if prosumers are entitled to full retail rates for their electricity, then they also should contribute to maintenance and development costs of the electric grid. It is worth noting, however, that distributed generation offers certain benefits to utility companies, including avoided costs for investment in ancillary power plants, fuel costs, and lower loss rates in the transmission and distribution system. On the other side of the equation, falling technology costs for renewable energy equipment and cost-saving impacts of disruptive technologies are likely to help reduce customer opposition for modest contributions to grid maintenance in net metering programs.

While by no means a comprehensive review of emerging renewable energy policies on offer, tendering and net metering policies are strong examples of how layered government interventions can accelerate transformation of the energy sector. The certainty that they offer to both large- and small-scale power producers is critical to reducing perceptions of market risk and increasing investment in emerging energy technologies. Perhaps most critically, the positive track records for these policies are demonstrating how accelerating the decline of global greenhouse gas emissions rates can stimulate, rather than hinder, future economic growth.

This article was originally published by the Worldwatch Institute and was republished with permission.