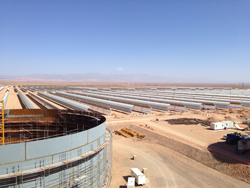 Sener will begin constructing the 200-megawatt Noor II and 150-megawatt Noor III units near Ouarzazate in the south of the country, the Spanish company said Wednesday in a website statement. Sener already finished the 160-megawatt Noor I that’s to start producing this year, it said. All three units can store solar power for use at night.

The facilities are part of Morocco’s plan to install 2,000 megawatts of solar capacity by 2020. The technology involves using mirrors that concentrate sunlight to generate steam and power turbines.

Institutions including Germany’s state-owned KfW, the World Bank, African Development Bank and European Investment Bank have committed about 1.4 billion euros in financing to the Noor project.