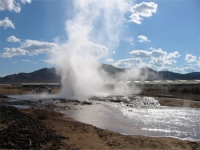 A comprehensive new MIT-led study on the potential for geothermal energy within the United States has found that mining the huge amounts of heat that reside as stored thermal energy in the Earth’s hard rock crust could supply a substantial portion of the electricity the country will need in the future — probably at competitive prices and with minimal environmental impact.