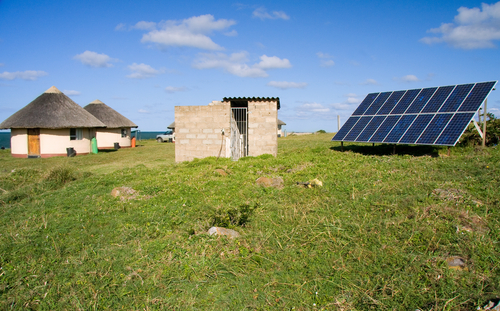 Power grids that work at a fraction of the scale of a traditional utility – called microgrids – have gained support from banks and developers as a way to bring power to the 620 million people across Africa that lack access to electricity.

From Kenya to Equatorial Guinea and Tanzania, companies including Italy’s biggest utility Enel SpA and General Electric Co. of the U.S. are building microgrids that distribute power to villages instead of whole nations.

A plunge in the cost of renewables has opened a new source of power for microgrids. While these smaller electricity networks deliver only a trickle of electricity, they’re demonstrating a way to bring energy to the poorest areas without lifting pollution. Institutions including the African Development Bank are supporting them as a way to balance goals on economic growth and global warming, promising the industry will expand beyond a few pilot projects.

“If you go back 130 years in Europe, electrification started with a minigrid,” Francesco Starace, chief executive officer of Enel, said in an interview. “There was a rich man, his house, his factory and a small power plant. Eventually his workers got hooked up, and then transmission lines were laid. Slowly we got the system we have today. We don’t see any reason why Africa shouldn’t do the same.”

Africa’s needs for power are immense. The continent has more than 620 million people who lack access to electricity, and consumption per capital is less than what’s needed to keep a 50-watt lightbulb going continuously, according to data from the International Energy Agency.

Microgrids are increasingly viable because rapidly falling costs for wind and solar mean developers have many more options than diesel generators for powering the systems. Microgrids also are cheaper and quicker to build than a traditional utility with a coal plant at the middle and high-voltage power lines radiating out to customers.

Enel is developing a microgrid in western Kenya for 100 villages. It will run on solar panels and wind turbines, with battery storage and diesel generators as back-up for nights and when there’s no breeze. Construction is due to begin in three months.

General Electric of the U.S. along with Princeton Power Systems Inc. and MAECI Solar are working on a sun-powered microgrid on the island of Annobon in Equatorial Guinea. The unit will have a capacity of 5 MW and will be operational by the end of 2016. Its $56 million cost was financed by the government of the oil-rich nation.

A Nairobi-based company called Powerhive is building a solar system in Kenya. It will have a capacity of 1 MW to 2 MW and is financed by investors including the Arizona panel maker First Solar Inc. and an unidentified European utility.

In Tanzania, a partnership dubbed Jumeme Rural Power Supply Ltd. is building a 5 MW microgrid for 16 villages in the nation’s northwestern region. Austrian renewables developer TerraProjects e.U., Germany’s Inensus GmbH and St. Augustine University of Tanzania are involved in the project. The European Commission and the Sustainable Energy Fund for Africa along with private investors are underwriting the cost of 17 million euros ($18.3 million).

“A single-house solar panel system is great, but it just powers a lightbulb or two,” said Joao Duarte Cunha, coordinator of the Sustainable Energy Fund for Africa. “A minigrid can power businesses and stimulate the local economy.”

The African Development Bank is supporting that project, part of an ambition to triple annual financing for projects aimed at combating global warming to $5 billion by 2020. It’s backing more renewables as costs plunge.

“The costs were the biggest challenge to building renewables in Africa, but this is no longer the case,” Alex Rugamba, director of the African Development Bank’s department of energy, environment and climate change, said by phone. “There is a huge untapped potential in our continent. We have to mobilize private financing, create enabling environments on the policy front.”

The bank expects the project in Tanzania to create 500 more businesses in addition to the 2,600 in the area that will be supplied by the microgrid. The project will eventually expand to connect 500,000 people, said Leo Schiefermueller, managing director of TerraProjects.

“We believe up to 120 million, about 20 percent of the people in non-electrified regions in Africa, could be connected to minigrids,” Schiefermueller said by phone.

Developers are working on ways to extend microgrids to new markets. Powerhive is evaluating work in Nigeria, South Africa, India and the Philippines. It also recently submitted a bid to build a microgrid in Madagascar.

“I see renewables as the future for Africa,” Angeli Hoekstra, Africa power and utilities leader at the consulting firm PwC, said “An especially big opportunity is using them for the development of off-grid systems.”