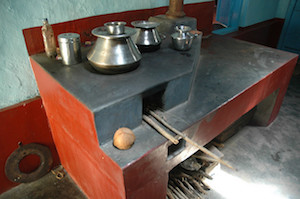 I first encountered induction cookers when I joined Indian Institute of Management (IIM) Kozhikode, a graduate business school, as visiting professor of strategy in 2011. Having never heard of them in the U.S., I quizzed people about them. “Do you mean the microwave oven?” “No,” people said, “this is for cooking, not simply heating or warming.” “You mean resistive cooking?” I then offered, “where the surface gets hot with a coil which sometimes glows under the glass surface?” “No, no” again was the reply.

I then went to the mall in downtown Calicut and saw large numbers of the induction cookers, by many different brands, typically made in China, in many retail stores. They sold for Rs. 3,000 to 4,000, that is, around $65. I bought a cooker made by one manufacturer that offered a cooking utensils set to go with it, as a promotion. This bundling of cooking utensils makes sense: One issue with induction cooking is that the bottom of the cooking vessel has to be flat, and must have iron content in it. The bundling of a saucepan and two pans with lids compelled me to buy the particular set; else I would have had to separately buy compatible cooking utensils.

When I plugged in the appliance to boil water in a pan, I was pleasantly shocked at how fast the water boiled. Making tea and coffee was easy. There was no flame, and therefore, no matchboxes needed; the contact surface remains largely cool. Cleaning involved merely wiping the surface, which did not get soiled by and large. The unit was portable and weighed little — I could carry it around. I was astonished one day when the wife of a colleague brought her induction unit into the living room, and cooked dosa — sourdough crepes — for us on the dining table as she watched TV, and engaged in conversation. Social participation — no running back and forth to the kitchen! Along with the microwave oven, which is comparatively heavier and larger, the induction cooker must be among the most effective appliances of the modern kitchen.

Growing up in Mumbai, the LPG cylinder with two burners was the mainstay of my mother’s cooking. LPG cylinders are clumsy — a whole supply chain is involved in their use. In Mumbai, I remember, there were occasions when they were out of stock. We then relied on a weak kerosene stove for cooking, which took a long time. At a certain point, with both my parents working, we managed to get two LPG cylinders, one for use and the other as standby. Waiting for the delivery of a replacement cylinder no longer held us back. The LPG cylinders were also heavy — moving the filled cylinders, unsnapping the pipe and related fittings from the old unit, and installing it on the new one, was not easy.

When I visited Sears in San Diego during my teaching break, I asked the appliances department about induction cookers. They said, “We do carry them. But you have to order them from the catalog. There is no display unit in the store.” No wonder I had never heard of or seen induction cookers in the U.S. Only as late as 2015, did I see IKEA carry an induction cooking range. Both the Sears individual unit, and the IKEA unit were far more expensive than the Indian one.

In studying pollution and climate change, I read the extensive literature on soot emissions from improper burning; carbon black’s disproportionate contribution to global warming; and about the carbon dioxide and carbon monoxide generated from inefficient biomass cooking on stoves slapped together using bricks and mud. The smoke and emissions, combined with poor ventilation in rural homes in emerging economies, contributes to premature deaths from inhalation, especially among women and children.

Pioneering and heroic efforts of social entrepreneurs — see Greenway, SustainTech, Global Alliance for Clean Burning Cookstoves — have resulted in well-designed, built, and distributed clean-burning cook stoves for the rural poor. The fuel remains the same — firewood, dung, or biomass in some form — but at least the burning is more efficient, and chimneys let off the smoke and effluent gases out of living spaces.

All this while, on a parallel track, for the very same rural poor, electricity access is being addressed via solar panels using Solar Home Systems (SHS). Depending on the size of such systems, lighting, phone charging, DC fans, and TV sets can be offered to rural households. But surprisingly, cooking using biomass, however clean, remains distinct from basic electricity access. Why? Possibly, if electricity-based cooking is included within the scope of SHS, the systems become larger, and possibly unaffordable, for individual home users.

Why should individual homes be the unit of analysis for SHS? Why can’t we design larger microgrids, centrally located in a village, of sufficient capacity, so that not only lighting and low power applications, but also cooking is made possible for individual homes? I believe such relatively large-sized community microgrids that permit induction cooking should be a part of a rural village electrification solutions. My assumption is: If we calculate the expenditures a household incurs on lighting using kerosene, phone, fans, TV, and cooking, the bill may be lower than what villagers spend on electricity and biomass cooking together today.

Self-sufficient village microgrids can be easily designed, with solar panels, batteries, and small diesel or biogas generators. Even more, we may make the microgrid hub equally an Internet hub, and while cabling homes for electricity, use complementary cables and Wi-Fi access points for broadband access. What would the technical design and economics for a village look like? No one knows. I wish to put together a team to do such analysis. Volunteers?