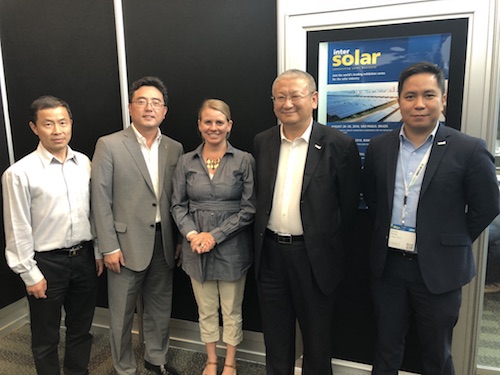 In July at Intersolar North America, Lee Zhenguo, President of LONGi Group laid out his “solar for solar” vision and explained how one day he believes solar will be so cheap that it will be used to help fix some of the monumental environmental issues that plague the world today.

In an interview and speaking through a translator, Mr. Lee said that his company, which manufacturers solar modules, has incredibly robust R&D and strong financial health, which means that LONGi can keep expanding manufacturing worldwide. The company currently has facilities in China and Malaysia and is expanding into India.

Mr. Lee said that LONGi has plans to produce up to 45 GW of solar modules per year by 2020 and that his facilities will rely on clean energy to produce the modules.

“Before we were using coal fire to power our manufacturing,” he explained, adding that “since 2015, we have moved manufacturing to Yunnan province in China which is 100 percent hydro.”

“In the future, when solar becomes cheap enough, we want to promote this ‘solar for solar’ philosophy meaning we use solar energy to power our manufacturing to make solar products,” he added.

Mr. Lee said that based on his company’s calculations, solar could be providing 68 percent of the world’s energy by 2050 and that would mean installing 1000 GW of solar energy capacity per year for the next 30 years in order to meet “population growth and personal electricity consumption growth.”

At that point, solar will be so cheap he said that the world will begin using it to power huge desalination plants and that this fresh water could then be used to flood the deserts so trees could be planted in them and pull CO2 out of the air, thereby helping to “remedy the ecosystem.”