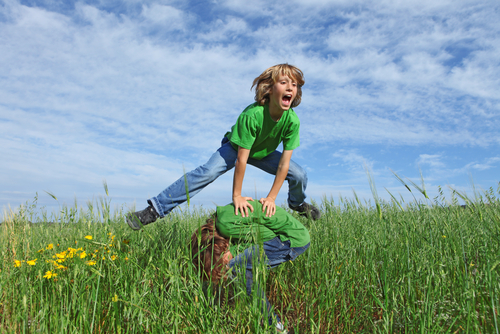 We all know the story of how mobile phones took off in emerging markets. Suddenly small cocoa farmers in Africa who never had a landline or a computer were checking commodity prices on their smartphones.

Today something similarly profound is starting to happen with renewable energy.

For the first time, more than half of the world’s annual investment in clean energy is coming from emerging markets instead of wealthier nations, according to a new analysis by Bloomberg New Energy Finance (BNEF). The handoff occurred last year, and it’s just the beginning.

The chart below shows quarterly clean-energy investment in OECD countries versus non-OECD countries. The trajectory is clear: If you’re a power plant salesperson, you’re probably going to be working with renewables in poor countries from now until the foreseeable future. 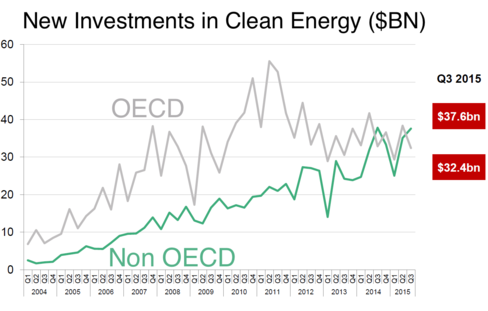 The world recently passed a turning point and is adding more capacity for clean energy each year than for coal, natural gas, and oil combined. For that trend to continue, rapidly developing economies are critical.

Last year, emerging markets invested a record $126 billion in clean energy, up 39 percent from the prior year, according to BNEF’s new report, called Climatescope. China dominated, adding 35 GW of clean energy, or more than the U.S., U.K., and France combined. India may soon be a contender, with a plan announced this year to add 175 GW by 2022.

Most emerging markets are rich in resources for wind, solar, and hydro power. Wind and solar are already competitive in price with grid electricity in some countries, and battery prices for large-scale electricity storage continue to fall.

Power infrastructure isn’t the same as mobile phones. The buildup of wind and solar takes time, and fossil fuels are still the cheapest option for when the wind doesn’t blow and the sun doesn’t shine. Coal and natural gas will continue to play a key role in the alleviation of energy poverty for millions of people.

But for populations still relying on expensive kerosine generators or who have no electricity at all, and for those living in the dangerous smog of thickly populated cities, this energy leap can’t come soon enough.