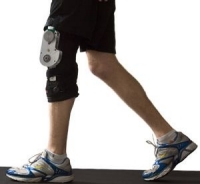 The wearable mechanism works much like how regenerative braking charges a battery in some hybrid vehicles, said Arthur Kuo, an associate professor of mechanical engineering at U-M and an author of a paper on the knee brace entitled, “Biomechanical Energy Harvesting: Generating Electricity During Walking with Minimal User Effort.”

Regenerative brakes collect the kinetic energy that would otherwise be dissipated as heat when a car slows down. This knee brace harvests the energy lost when a human brakes the knee after swinging the leg forward to take a step.

Kuo, who called the device “a cocktail-napkin idea,” says knee joints are uniquely suited for this endeavor.

“There is power to be harvested from various places in the body, and you can use that to generate electricity. The knee is probably the best place,” he said. “During walking, you dissipate energy in various places, when your foot hits the ground, for example. You have to make up for this by performing work with your muscles.”

“The body is clever,” Kuo said. “In a lot of places where it could be dissipating energy, it may actually be storing it and getting it back elastically. Your tendons act like springs. In many places, we’re not sure whether the energy is really being dissipated or you’re just storing it temporarily. We believe that when you’re slowing down the knee at the end of swinging the leg, most of that energy normally is just wasted.”

The scientists tested the knee brace on six men walking leisurely on a treadmill at 1.5 meters per second (2.2 miles per hour). They measured the subjects’ respiration to determine how hard they were working. A control group wore the brace with the generator disengaged to measure how the weight of the 3.5-pound brace affected the wearer.

“We’ve demonstrated proof of concept,” Kuo said. “The prototype device is bulky and heavy, and it does affect the wearer just to carry. But the energy generation part itself has very little effect on the wearer, whether it is turned on or not. We hope to improve the device so that it is easier to carry, and to retain the energy-harvesting capabilities.”

A lighter version would be helpful to hikers or soldiers who don’t have easy access to electricity. And the scientists say similar mechanisms could be built into prosthetic knees other implantable devices such as pacemakers or neurotransmitters that today require a battery, and periodic surgery to replace that battery.

“A future energy harvester might be implanted along with such a device and generate its own power from walking,” Kuo said.