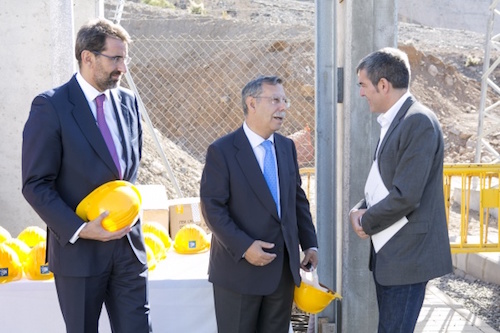 Planned infrastructure upgrades for the Canary Islands include strengthening transmission grid meshing; development of energy storage systems to serve as operation tools to improve the sustainability of the electricity system; and construction of new interconnections between islands and new electricity lines for the integration of renewables, according to Red Electrica.

Spanish electric utility Endesa transferred the 200 MW Soria-Chira pumped storage project to Red Electrica for 11.2 million euros. Total investment for the pumped storage facility could reach 300 million euros (US$330 million), according to Red Electrica. The project is designed to ensure grid stability rather than operate as a generating facility.

Lead image: The CEO of Red Electrica, Juan Lasala, and the Chairman of the Company, Jose Folgado, receiving the President of the Canary island, Fernando Clavijo, on his arrival at the Santa Agueda substation. Credit: Red Electrica.