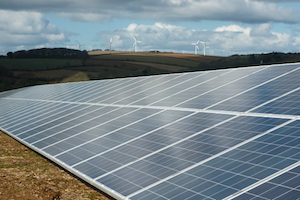 Jordan is pressing ahead with its first electricity storage project to bolster its expansion in solar and wind generation.

The Middle Eastern kingdom expects to sign a contract for a 30-MW battery in the third quarter, according to Energy and Mineral Resources Minister Saleh Al Kharabsheh. The project, which was tendered last year, will help ensure the country has green electricity day and night, he said in an interview at the Energy Transition forum in Berlin.

Jordan is focusing on renewables because it lacks the oil and gas reserves of its neighbors and has to import most of its energy. It’s also one of the most water-stressed nations in the world, so a steady supply of green energy will help ease the cost of pumping water, which takes up about 15 percent of the nation’s gross domestic product each year.

The influx of at least 1.4 million refugees from neighboring Syria has further strained Jordan’s infrastructure.

Jordan aims to meet its target of securing 10 percent of energy from renewable sources by 2020. With costs of producing power from sun and wind falling, the next step is storage, Al Karabsheh said.

“The challenge now is how much we can expand in terms of renewables, making sure that our system continues to be reliable and available, so here comes the issue of storage,” he said.

Jordan is now seeking to beat its 2020 targets, aiming to produce 25 percent of its electricity from renewables, he said at the conference. The kingdom is reviewing its 2007-2025 strategy with plans to establish even more ambitious targets toward 2030 and 2050.

Development banks are helping finance this program. The European Bank for Reconstruction and Development recently lent $70 million to Alcazar Energy Ltd., a Dubai-based developer, for an 86-MW wind farm in Jordan. ACWA Power International of Saudi Arabia is also planning renewables projects in the country.

Jordan has about 20 investors in its power generation projects, with six on conventional plants and 14 to 15 on renewables.

“We are following the development of storage technology,” the minister said. “We need to solve the issue of the availability during the night time.”