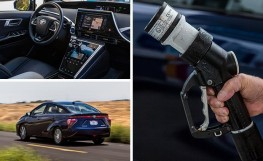 In search of its energy independence and environmental credibility, Japan, the sixth largest emitter of greenhouse gases in the world, has surprised everyone with a new vision to create a “hydrogen society”, a dream that leaves some experts skeptical.

The country will reveal more to the world with a new commitment to reduce emissions by 26% between 2013 through 2030, by presenting its plans at the UN International Climate Conference (COP21). The conference is being held in Paris between November 30 and December 11 of this year.

Japan hopes to contribute to lowering greenhouse gas emissions with its technological advances in the hydrogen area, which has the advantage of zero emissions during combustion thereby producing no contaminants, only water vapor.

The development of energy from hydrogen has become Japan’s new obsession. “Building a vision of a society based on hydrogen and integrating to scale energy and transport”, is the mantra of Pierre-Etienne Franc who is Director of markets and advanced technologies at Air Liquide, a French company. Air Liquide is actively involved in the development of the hydrogen energy industry worldwide and is already operating hydrogen filling stations in Japan, Europe and in the United States.

“Hydrogen is the energy of the future,” says Japanese Prime Minister Shinzo Abe, eyeing a market of no less than one trillion yen (7.5 billion euros) annually from the hydrogen economy by 2030. Japan sees a great opportunity to promote this innovative technology during the Olympic Games in Tokyo coming in 2020.

The project has gained importance after the disaster at Fukushima, which deprived the country of all nuclear power on the archipelago for two years.

Since the program inception in 2009, Japan has equipped more than 100,000 homes with fuel cells powered by hydrogen. Utilizing a device the size a refrigerator at each house to generate electricity. An energy farm (as the Japanese say an ene-farm unit) pumps natural gas from a local utility into a fuel cell, which uses a processor to extract the hydrogen and mix it with oxygen from the ambient air. The reaction produces enough power to cover about half the energy demand for an average family. The byproduct is excess heat that supplies a home with hot water. Japan’s objective is to equip 1.4 million households by 2020 and 5.3 million in 2030 with these fuel cells.

Costs may prove dissuasive to the achievement of Japan’s goals. Despite government subsidies and the support from companies like Panasonic and Toshiba, these systems remain expensive – costing two million yen (€15,000 euros) each. However, it should be noted that most new energy sources such as wind power and solar were subsidized at their early stages.

In the automotive sector, Japan is leading Germany and the United States, thanks to the launch, in late 2014, of the “Mirai” vehicle (meaning future in Japanese), by Toyota which is the first production car in the world powered by hydrogen. The Mirai’s fuel cell stack combines outside oxygen with hydrogen taken from its two on-board tanks to produce electricity, which in turn is stored in a battery to power a single, 152bhp (brake horsepower) electric motor. This in turn drives the front wheels through a fixed-ratio transmission. The only waste product at the tailpipe is water.

Despite the hefty price tag (more than 60,000 euros), there is demand. Production is starting with 700 vehicles this year. The advantages are zero CO2 emissions and driving autonomy (a range of 502 kilometers) similar to that of a car with a gasoline engine and a refill time between three to five minutes.

“The FCV (“Fuel Cell Vehicle”) reveal themselves as the ideal eco-friendly cars,” said Hisashi Nakai, an expert of the strategic planning department of Toyota. “The main problem is cost. Since the project just began, cost reduction is not achieved from one day to the other,” he explains. Responding to a question about the possibility of explosion risks of this highly flammable gas, Nakai responded and said, “the hydrogen tank can withstand any shock. We have performed hundreds of tests, including shooting the tank directly with a gun (firearm) and it did not explode.”

Toyota is not alone. Honda plans to launch in March of 2016 its version of a hydrogen vehicle with a fuel cell and Nissan has joined the government in this venture, despite their initial reluctance. Less than 30 hydrogen, fueling stations exist across Japan. The cost per fueling station is expensive since it requires an investment of approximately 3 million Euros for each station. Security controls are very strict to avoid the smallest leak of this colorless and odorless gas.

Another major drawback is that currently, hydrogen is produced mainly from hydrocarbons that emit greenhouse gases during the production process. “Selling a hydrogen economy without changing its production structure is heresy!” admitted Franc. Japan hopes to achieve in the medium term a “green” hydrogen using water electrolysis.

The “Mirai” vehicle requires 5 kilograms of hydrogen to fill its two tanks. At a cost of 8.72 euros per kilogram filling up will cost 43.60 euros according to Toyota. The car averages approximately 100 kilometers per kilogram of hydrogen, which is nearly four times the cost of driving a Toyota Camry hybrid. However, the pioneering Mirai owners will fuel their cars for free using access cards or codes provided by Toyota for the first three years; thus starting the Japanese initiative to fuel vehicles using the most abundant element on earth.

John is co-author of three patents on biodiesel production technology. He started his career in 1990 at D. Blech & Company as an analyst focused on the private sector of biotechnology. In 1993, he served as Director at First Atlantic Capital in New York, NY. At First Atlantic Capital in 1995, John notably founded, Genome Technologies, Inc., according to Bloomberg news, the second private company focused on genetics sequencing. From 1995 through 2002, he served as President and CEO of Grace Investments until the Company was sold in 2002 to Cardinal Capital Management, Inc. where he worked for 2 years as Senior Managing Director as stipulated in the Share Purchase Agreement.

This article was originally published on Capital Business.