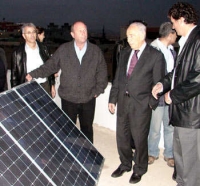 Barcelona, Spain [RenewableEnergyAccess.com] In a remote village in the Negev Desert of Israel, several companies have collaborated to install a multipurpose solar electricity system that will eventually provide the entire village, more than 100 separate structures, with solar power.

Prior to this effort, Darijat Village’s reliance on noisy generators cost the village approximately U.S. $350,000 a year for only four hours of electricity a day. Systems were installed for streetlights, the mosque and the school, which also has an AirX small wind turbine by Southwest Windpower, connected via a Xantrex C35 charge controller. Each household received a 1 kW solar photovoltaic (PV) array. The PV modules were by Isofoton (monocrystalline) and Sharp (polycrystalline). The first phase of the system, installed in late 2005 by Interdan Ltd., includes 22 Xantrex inverters and solar charge controllers. The Xantrex solar charge controllers (C60 + CM display) convert the raw direct current (DC) energy collected by the solar panels into DC power to charge a battery bank (720AH-24V). The Xantrex inverters (PS2524E) convert the battery power into alternating current (AC) electricity for household use. They offer the advantage of high-quality sine wave, ready for future grid-connection with Sell-mode. “This project aligns with the Xantrex mission to improve the quality of life for people around the world by providing them with clean, efficient, usable power anytime, anywhere,” said John Wallace, Xantrex CEO. After the first phase is complete, the Negev Development Authority and Ministry of Infrastructure, which are financing the project, plan to eventually have all 95 homes in the village connected to the solar electric system. “This is just the beginning,” said Gil Nezer, Interdan Marketing Director. “Darijat Village is an example of our capability to provide solar systems to generate electricity for entire remote communities. The mission of this village is to be a sustainable model that can be replicated to help the development of remote villages around the world.” This is a milestone project, according to Interdan, as it is the first time the Israeli government has sponsored a project of renewable energy. While an aggressive government program to promote and develop renewable energy electricity generation is not yet in place, such programs are under discussion.