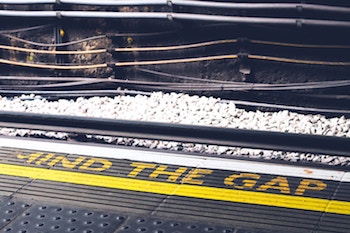 “Mind the Gap.” Whether you’ve visited London or not, you’re most likely familiar with the London Underground’s famous catchphrase. However, that well-known phrase may have implications related to clean energy based on a recent analysis. While Google, Apple, Facebook and other large corporations have lately garnered considerable attention for their commitments to renewable energy, electric utilities and companies like Nest, Tesla and Vivint Solar have also focused on providing innovative programs and technologies to residential energy customers.

But, a new report from the Smart Energy Consumer Collaborative (SECC), a nonprofit organization that has been researching energy customer needs since 2011, indicates that electric utilities and other energy industry stakeholders may be missing a considerable opportunity in a forgotten middle ground made up of small and medium-sized businesses (SMBs). These smaller enterprises, often considered the backbone of the U.S. economy since they employ nearly half of the private-sector workforce, consume approximately 20 percent of the nation’s energy output — yet attract less than four percent of energy efficiency spending from electric utilities.

The new report, which reached over 1,000 energy decision-makers at small and medium-sized businesses via an online survey, shows this discrepancy isn’t so much due to a lack of customer interest, but rather that other factors make SMBs a difficult target for electric utilities, including the diversity of their operations that leads to a wide range of energy needs and motivations.

Attempting to demystify the sometimes unclear motivations of this untapped customer base, the “Understanding Your SMB Customers” report divides the market into five segments based on energy-related values, behaviors and motivations. These range from the Established & Engaged, who are always seeking new ways to use energy more efficiently, to the largely apathetic, Decidedly Disengaged, who express almost no interest in energy efficiency and other energy programs that could save them money.

This is further supported by the survey showing that nearly 75 percent of all SMBs are interested in receiving bill credits for reducing electricity use during peak demand times, and the same percentage is interested in learning more about new rate plans that could be better suited to their business operations. Among Motivated Yet Inactive customers, a segment that is very open to energy-efficient actions yet hasn’t participated for one reason or another, nearly 90 percent expressed interest in these kinds of programs.

Related: Most US Businesses See Onsite Energy in Their Future

Interest from SMBs also extends to renewables, with many small and medium-sized enterprises indicating they are keen to participate in renewable energy programs, either through installing their own solar panels or participating in a clean energy program through their electricity provider. This is especially true among the Established & Engaged customers, who represent 15 percent SMB companies but utilize more than 50 percent of the electricity in this market.

Established & Engaged customers are more likely to be larger organizations in energy-intensive sectors, such as manufacturing or construction, and see the most value in the cost-saving benefits of renewable energy compared to other segments. Analysis shows that nearly three-quarters of this segment express interest in obtaining electricity from their own solar panels or a utility program involving wind or solar.

Even among the Decidedly Disengaged, there is an opportunity for enhanced energy usage. For example, nearly two-thirds of the SMBs in this segment would consider energy-efficient lighting – one of the most proven and cost-effective steps a business can take to reduce energy consumption.

Clearly, there is an SMB gap that needs to be addressed by the clean energy economy. Identifying opportunities is a positive first step in finding new innovative ways to meet SMB energy requirements and leverage the full potential of smart energy solutions. With ongoing, new advancements in smart energy technologies taking place today, now is a good time for SMBs and stakeholders in clean energy to engage one another, increasing the adoption of solutions across the entire smart energy ecosystem and helping to build a smarter energy future.

Related: How Medium and Small Firms Can Join the Renewable Energy Rush