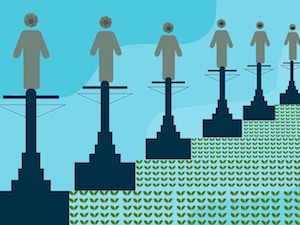 Earlier this week, SolarEdge Technologies announced that it is launching what it said is a solution for grid services and virtual power plants to support a shared energy economy. The company said its grid services will enable the pooling of PV and storage through aggregated control systems.

SolarEdge said the system offers benefits to all stakeholders:

With the increasing proliferation of PV and storage around the world, the energy production industry is transitioning from a centralized system to a distributed network in which energy is produced closer to the location it is stored and consumed. This could eventually PV and storage system owners with a new revenue stream opportunity by selling their self-produced and stored energy to their neighbors through blockchain technology or to their utilities.

However, the new complex network of distributed generation requires sophisticated management platforms to provide real-time, aggregated control of the demand and supply of energy.

“With the continued evolution in PV and storage, renewable energy can be affordable and abundant. We are moving closer to the day when everyone will produce, store, and sell their own energy,” stated Guy Sella, CEO of SolarEdge, Founder. “Our grid services aim to accelerate the transition to a more stable and cost-effective grid in which people have more control over their energy.”

“Implementing a new model of energy generation requires simultaneous advancements at the hardware, system, and network levels, said Lior Handelsman, a VP with the company.

“Our HD-Wave inverter made PV more energy-efficient and cost effective. At the system level, our inverters synchronize energy production, usage, and storage to create a seamless user experience with our monitoring platform,” he said.

“Now at the network level, our grid services enable the aggregation and synchronization of multiple PV systems to create a distributed network. This is an important milestone in making

the aggregation and synchronization of multiple PV systems to create a distributed network. This is an important milestone in making solar energy ubiquitous.”

Customers interested in learning more about the actual grid services that SolarEdge is launching will have to get in touch with the company. Finally, though it is pretty promotional, the video below lays out some interesting numbers and shows why the company believes that aggregated DERs are the future of energy.