San Francisco — Intersolar North America 2014 in San Francisco was heralded as a success by many of the estimated 550 exhibitors at the show, attendance at which was slightly smaller than last year, but “more intense,” exhibitors said. Expected to attract 27,000 attendees and exhibitors overall, the show varied its program this year to broaden topic coverage into areas like energy storage and balance-of-system costs in order to honor more industry icons and market innovators. 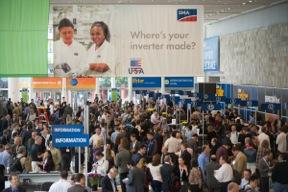 An inaugural award for the greatest Champion of Change was presented to California Public Utilities Commission President Michael Peevey, who fostered the growth of the incipient PV industry there into the leading state program in the country. Princeton Power Systems also won the Best Project Award for North America with its 400-kW Alcatraz Island Microgrid System, completed for the U.S. National Park Service by filling a few empty prison cells with enough new technology to light up the rest of them.

A Sampling of Innovators and Market Integrators, by Technology Focus:

Kyocera Solar director of marketing Cecilia Aguilion says that the company’s panel production recently passed the five-gigawatt hurdle, and that the Scottsdale, Arizona company is on track for 1.4 GW of production in the current year, ending March 2015. Among production sites is the company’s Tijuana location, one of few in Mexico, which has served this continent for a decade. Beyond panels and street lighting, Kyocera is expanding into independent power production and plant financing, as evidenced by the company’s recent investment in a $38 million, 9.4 MW tax equity PV project being developed in New York state by U.S. Light Energy, based in Latham, New York, using Kyocera panels. 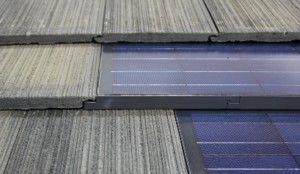 CertainTeed Saint-Gobain launched their new solar tile at the show, replacing standard curved ceramic roof tiles with a matched-curve solar panel. This product complements the flat roof solar shingle the company unveiled last year, notes Christopher Fisher, a PV product development leader for the company, based in Blue Bell, Pennsylvania. Since many aging residential roofs need replacing prior to traditional solar panel system installation, CertainTeed developed an integrated solution for both steps, embedding mono-crystalline cells on a hard plastic base, with a thin tempered glass top. Jumping up and down on a panel on the floor, Fisher said, “You won’t break these crawling around on the roof for whatever reason.” The black panels carry a 30 percent cost premium over a traditionally metal-racked PV system, but are more aesthetically pleasing, at just over an inch thick, and designed to be more dependable. The panels carry a 25 year power output warranty — 25 percent longer than most standard panels, and a 15 year installation workmanship warranty, still unusual in the industry.

QBotix, the leading robotic PV system in the market, also unveiled its latest generation SolBot robot and dual-tracker stand design. “We cut a lot of metal volume and increased wind speed tolerance from 95 MPH to 104 MPH,” says Matt Lugar, the vice president of sales and marketing for the Menlo Park, California-based company. Part of the metal reduction was achieved by eliminating two of the five robot drive motors through new design, and more metal was cut by switching to a yoke-shaped mast. The company also has improved the actuator arms that extend from the robot to adjust the array, now using nimble two-fingered paddles that can compensate for slight mis-alignments better than the prior generation rail-riding unit. 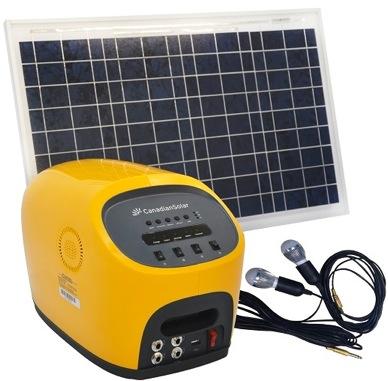 One of the few new mobile solar products on display this year was Canadian Solar’s Maples system, a toast-sized five-watt panel, which comes with a light bulb-shaped LED rechargeable flashlight/battery unit – in four colors, and a charging cable for a mobile phone, priced at an estimated $50. Yan Zhuang, the company’s senior vice president and chief commercial officer, says that the product has been test marketed in India, and is now being rolled out to various countries in Africa, Asia and Latin America, at times in cooperation with NGOs. The Guelph, Ontario-based company also unveiled an off-grid residential unit, the Andes, that yields up to 50 watts from a breadbox-sized unit plus panel. The lead-acid battery system includes LED lamps, USB charging ports, and a radio/MP3 player.

One PV balance-of-system cost analyst at Intersolar measuring the efficiency of U.S. solar installs against standard practices in other countries was Koben Calhoun of the Rocky Mountain Institute, based in Boulder, Colorado. Calhoun had previously measured the soft costs — everything but hardware, thus including permitting, inspection, interconnection, customer acquisition, installation, and margins — of residential installations in the United States and Germany, finding that the U.S. soft cost was $1.22 per watt installed, versus 33 cents in Germany. He returned from Australia a few weeks ago, where he found soft costs were about 65 cents, about half the U.S. cost level. “Now U.S. installers are beginning to track their installation times for specific brand products and systems configurations,” he says.