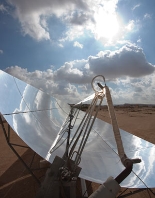 London, UK — Integrated Solar Combined Cycle (ISCC) technology aims to draw the environmental benefits of solar energy together with the operational advantages of a ‘conventional’ gas turbine-steam turbine combined cycle plant. While the solar resource partially substitutes fossil fuels, the installation can also supply energy to the grid whenever it is required. In addition, by taking advantage of the existing infrastructure associated with the development of a conventional thermal power plant – including but not limited to site access, power transmission links and a steam turbine power island – the economics of the concentrating solar thermal component are likely to be significantly enhanced.

In a combined cycle plant, the high temperature exhaust gas from the turbine is passed through a heat recovery steam generator from which high-pressure steam is used in a steam turbine. Such installations are now operating at above 50% efficiency and the technology is well proven. In ISCC installations, additional thermal energy from the solar collector field is effectively injected into the heat recovery steam generator (HRSG) of a conventional combined cycle plant. This boosts steam production and consequently electrical output. It also potentially allows CSP to be easily integrated into conventional fossil-fired thermal plants at relatively low extra cost.

As a relatively mature technology with a proven track record, ISCC installations currently under development have utilized parabolic trough reflectors. However, while the technology is relatively straightforward, in order to install solar combined cycle hybrid plants, there are certain requirements associated with any such development, including a large site and suitable topography.

Obviously for any solar installation, the direct normal insolation should be as high as possible, plus there is also a requirement for cooling water as part of the condensing cycle of the thermal power island. A final, though fundamental, requirement is the availability of suitable electricity transmission infrastructure to convey the solar generated power to load centres.

Given a suitable site, however, ISCC does offer some unique advantages for utilities and other power supply interests. Primarily, electricity from CSP technology is generated exactly like conventional electricity, except solar power is used to provide heat to the boiler instead of fossil fuels. CSP is also becoming increasingly suited to changing power demand characteristics. Largely due to the increasing use of air conditioning, in some regions peak electricity demand has been far greater during recent summers than the peak winter demand. And, CSP plants deliver their maximum output during these peak hours, potentially offering opportunities to sell into the more attractively priced spot market at such times. Furthermore, although the current generation of ISCC installations have not included thermal storage capacity, this technology does allowing CSP to extend its operational range.

(Left: The power block and some of the solar collector field of the world’s first operational ISCC plant, Ain Beni Mathar in Morocco. Credit: Abener)

Nor is the integration of solar thermal capacity limited to new-build gas-fired combined cycle installations. In August 2009 Abengoa Solar announced that it is to build the first US CSP installation integrated with a coal-fired plant.

Owned by Colorado-based US utility group Xcel Energy, the demonstration project is planned to increase output at the Cameo coal-fired plant, near Grand Junction, Colorado, by 4 MW.

‘If this demonstration works, we may be able to implement this type of technological advance in other coal-fired power plants to help further reduce carbon dioxide emissions in Colorado and possibly other areas of our service territory’, said David Wilks, president of Energy Supply for Xcel Energy. Meanwhile, Ken May, director of Abengoa Solar IST, emphasized the high potential of large-scale applications of the industrial solar installation technology, saying: ‘Proper use of the solar thermal energy produced at these facilities can improve plant efficiency while lowering CO2 emissions. The successful integration of solar and coal technologies will encourage more widespread use throughout the utility sector.’

And, later this year, US utility group Florida Power and Light (FPL) plans to open the US’ first hybrid solar thermal facility to connect to an existing fossil fuel plant at its Martin Next Generation Solar Energy Center in Indiantown, Florida. At 75 MW the CSP installation will be the largest of FPL’s solar facilities and will consist of approximately 180,000 mirrors over roughly 500 acres (200 ha) at the existing plant location, which currently produces up to 2.8 GW.

A Step Into the Light

The world’s first ISCC plant is being constructed by Spanish engineering firm Abener at Ain Beni Mathar, In Morocco. This 470 MW plant is under development for state utility group Office National de l’Electricité (ONE) and uses parabolic trough technology to provide additional solar thermal component to a conventional gas-fired power island. The solar component will supply 20 MWe, leaving some 450 MW coming from the conventional thermal plant or an expected annual net production of 3538 GWh per year. The solar output is estimated at 1.13% of the annual production or some 40 GWh per year.

The installation features a 180,000 m2 solar field, using 224 solar collector assemblies in 56 loops. The thermo-oil heat transfer fluid within is pumped to the power block at about 400ºC.

Abener, in collaboration with Abengoa Solar and Teyma, the construction company of Abengoa, has engineered, designed and built the plant under the terms of a turnkey contract with Moroccan state energy company ONE. Rioglass manufactured the mirrors while the 8064 heat collector elements came from Schott. The EPC contractor is Abener Energia, which will also operate the plant together with 100% owner ONE.

The world’s second ISCC plant is being constructed in Algeria again by Abener, in collaboration with Abengoa Solar (both are subsidiary companies of Abengoa), which is providing the design and will act as the technician of the solar part. The 150 MWe Hassi R’Mel Project, located near the town of the same name, is being lead by the project company Solar Power Plant 1 (SPP1) – majority held by engineering group Abener with a 51% stake. The project will adjoin an existing Sonelgaz power station at Tilghemt located at the country’s largest natural gas field, Hassi R’Mel, in northern Algeria.

Bidding on the build-own-operate contract launched in June 2004 and saw close to 10 companies bid, including General Electric, Lavallin, Siemens, Alstom and Black & Veatch.

Subsequently, the construction contract was signed in December 2006. The plant is to be developed on behalf of New Energy Algeria (NEAL), a joint venture set up by state-owned oil and gas and electricity majors, Sonatrach and Sonelgaz respectively, and an agro-industrial firm Semouleries Industrielles de la Mitidja (SIM), to carry out renewable energy projects. NEAL has a 20% equity holding in SPP1. Sonatrach (through its subsidiary Société de Valorisation des Hydrocarbures, SVH) holds a further 14%, and Compañía Española de Financiación del Desarrollo S.A (COFIDES), a Spanish state and privately owned company that provides medium and long-term financial support for projects in foreign countries where there is a Spanish interest, has a 15% holding.

At some 180,000 m², the two parabolic solar fields for the CSP component use Solucar TR troughs with galvanized steel framing, designed by Abengoa Solar NT, and again using glass mirrors manufactured at Abengoa Solar’s Rioglass Solar factory. The solar fields will comprise 224 parabolic collectors in 56 loops and the solar contribution to the total output is estimated at some 20 MWe. It will work in conjunction with a 130 MW CCGT plant comprising two 42 MW SGT-800 gas turbines supplied by Siemens and a 80 MW SST-900 steam turbine supplied also by Siemens.

The EPC contractor is formed by Abener and Teyma, which in April 2009 awarded the contract for the electrical balance of plant to ABB. The order, worth $14 million, includes design, engineering, supply, erection and commissioning of the medium- and low-voltage switchgear, auxiliary transformers, generator circuit breakers, isolated bus-ducts and emergency diesel generators. The project is expected to be completed by August 2010. Technical assistance was provided by Lahmeyer International while the lead bank behind the approximately €320 million scheme is Banque Extérieure d’Algérie (BEA).

With ISCC facilities in Morocco and Algeria currently in final commissioning, the technology is now in a position to demonstrate the essential track record of reliability for widespread acceptance.

Certainly, the Middle East and North Africa (MENA) region offers considerable scope for such developments with its ideal climate and ample space. Perhaps recognising this, national governments in the region are introducing measures that support such developments. The Hassi R’Mel development, for example, follows the introduction of a national programme for the development of renewable energy, the so-called Algerian Sustainable Energy Development Plan for 2020, together with a feed-in tariff scheme which has been in place since March 2004 and which offers elevated tariffs for renewable power production such as that coming from solar thermal capacity.

On the broader scale, ultimately it is envisaged that energy from such installations will be exported to the key demand centres of continental Europe via under-sea HVDC interconnection cables. Tewfik Hasni, ex-chief executive of NEAL has already reportedly proposed a 3000 km transmission line stretching from the Algerian town of Adrar to the German city of Aachen.

Egypt has also proposed an ISCC development at Kuraymat, about 95 km south of Cairo, on the eastern side of the river Nile, with the country’s New and Renewable Energy Authority (NREA) tendering – in 2005 – for a 150 MW ISCC plant with a solar power island consisting of a parabolic trough solar field. On completion, the plant will generate some 20 MWe from its solar capacity, producing around 33 GWh anually.

And, Iran is expected to commission an ISCC installation in the desert Yazd region featuring a solar thermal component of some 17 MW. The second of the two gas turbines planned at this 478 MW development is reportedly now operational and the plant is due for final commissioning this year. The contractor for the US$170 million project is the Iran Electricity Development Organisation.

Meanwhile, the longer-term prospects for ISCC development were given a major boost in October 2009, when the Desertec Industrial Initiative (DII) – a project born under the auspices of the Club of Rome and other institutions – was launched. This project seeks to develop renewable energy production in the desert regions of the MENA for both local use and for export to Europe.

This initiative is aimed at meeting 15% of Europe’s energy needs, and a substantial part of the demand in Northern Africa and the Middle East, via concentrated solar plants and other renewable sources of energy by 2050. And, for example, DII is already collaborating with the ‘Mediterranean Solar Plan’, an initiative that was approved by the European Union in 2008 to promote large-scale solar power projects in Northern Africa.

Reinforcing this positive outlook, Santiago Seage, CEO of Abengoa Solar has pointed out that: ‘Northern Africa and the Middle East are undoubtedly areas with a tremendous solar energy potential, for both the region’s own use as well as exporting as soon as we have the necessary infrastructure in place. This initiative should bring us closer to making this vision come true.’

(Right: Under plans set out by the Desertec Industrial Initiative (DII), subsea cables will transmit solar energy from the MENA region to demand centres in continental Europe. Credit: ABB)