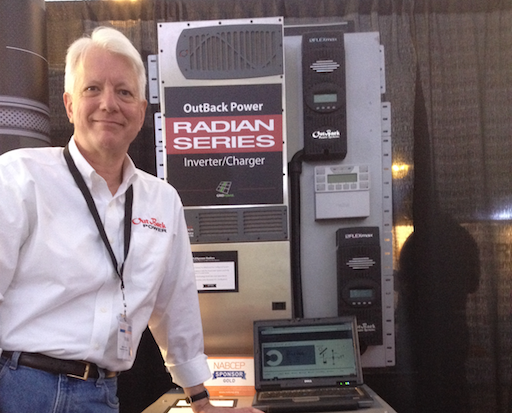 The latest technology advances in demand for residential solar PV plus energy storage (solar+storage) systems have been a key attraction for U.S. solar installers attending the annual North American Board of Certified Energy Practitioners (NABCEP) conference in San Diego the week of April 3. Among the estimated 500 attendees at this year’s certification/recertification event were 25 percent more storage vendors, according to Kathryn Casey, the program manager for NABCEP, based in Clifton Park, N.J.

The beginning groundswell in U.S. residential solar+storage installations has encouraged a host of technology developers to improve their offerings, lowering costs, adding controls for benefit harvesting, and integrating more electronics in their systems. Some U.S. state markets are booming for grid regulation reasons, like Hawaii, where “storage is the only good option,” Neal Roche, partnership development manager for Aquion Energy, said. The Westlake Village, Calif.-based company ships a maritime container of its salt-water based batteries to Hawaii every month, he said.

While solar installation growth continues unabated, the growth of U.S. residential storage — now representing just under a third of the total market that also includes commercial and industrial use — is expected to be faster for years to come. The estimated $381 million U.S. market for energy storage in 2015 is predicted to mushroom to $2 billion by 2020, according to one recent analysis. By that time, some 60 percent of all storage will be installed behind the meter, for self-consumption and possible contribution to the grid, other analysts have predicted.

The many options of how to use storage, along with enhanced residential wiring requirements, including a dedicated sub-panel and designated emergency circuits, means that solar+storage installations in the near future will become more computer controlled, more data intensive, and more broadly manipulated by system owners, grid operators and energy arbitrage financiers.

Among the many new storage technologies being demonstrated at the show is OutBack Power’s EnergyCell Nano-Carbon battery, which uses nano-sized carbon particles in the battery to help boost performance by 30 percent to 50 percent over standard lead acid batteries, increasing conductivity and capacitance, according to Mark Cerasuolo, marketing director of the Arlington, Wash.-based company. The technology permits more cycles and is also more tolerant of depth of discharge use than standard lead-acid batteries. While the nano-carbon batteries are perhaps 10 percent more expensive than standard lead-acid batteries, they are only about half of the cost of lithium-ion-based battery chemistry.

“Over 10,000 sonnenBatterie systems are in use across Germany for solar self-consumption, and now we’re introducing our products to the U.S. which include backup power and TOU,” Michelle Mapel, director of marketing for Sonnen, said. An advantage this TOU module offers installers is the capability of aggregating individual systems, so that differences in performance can be identified quickly. The system permits web-based access, so an installer also can trouble-shoot a residential problem without rolling a repair truck.

A new lithium battery chemistry, lithium-ferro-phosphate (LFP), was also being demonstrated by Simpliphi, an Ojai, Calif.-based manufacturer. Unlike normal lithium, the LFP battery is not at risk of thermal runaway or fire, noted Dean Middleton, vice president of sales for the company. Unlike most battery chemistries, the LFP also carries a 10-year warranty. Initially designed for military use, the Simpliphi PHI 2.6 Smart-Tech battery offers 10,000 cycles at a 100 percent depth of discharge.

One new inverter offering at the show was ABB’s UNO-2.0-I and UNO-2.5-I single-phase string inverter line, said Robert Lowe, business development manager for inverters at the company’s Phoenix-based solar unit. Among new features in the outdoor inverter, the company’s smallest is a built-in heat sink compartment and front panel display system. The inverter was initially acquired with ABB’s purchase of Power-One, but was re-engineered and rigorously tested before its release in March.

ABB is one of about 60 solar or storage manufacturers that offer continuing education courses recognized by NABCEP for initial certification or recertification. The free ABB course, which is primarily generic in nature, is divided into functional areas so that an installer needing a refresher for a specific problem — like emergency shutdown — can take the course, even on a rooftop, in a matter of minutes, Lowe said.

“Communications and monitoring are the new expectation in solar and storage systems,” he said.

In a generic battery storage system, controls represent an estimated 15 percent of total system cost, he added, noting that that percentage will rise with additional data management features, as in the automotive industry, where computers now represent a large part of the total cost of a vehicle.

This article was updated on April 21 at 10:00 a.m. EST to correct Mark Cerasuolo’s title and amends Michelle Mapel’s quotes.