With all the discussion of grid based energy storage for renewable energy integration, the two cheapest and most mature solutions are overlooked. They are also the solutions most often overlooked by investors captivated by the story of clean technology.

A few years ago, I put together some graphs to show this as dramatically as possible.  I surveyed the available data on energy storage and other grid integration technologies for the costs of existing installations, and calculated average cost per installed kW (power), per installed kWh (energy) and round trip efficiency (the percent of energy lost through round-trip charging and discharging.) 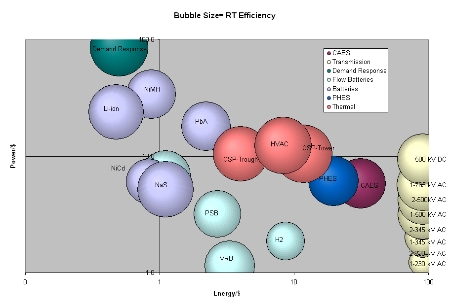 The most cost-effective technologies are closer to the upper right hand corner of the graph, and have relatively large bubbles (high round trip efficiency.)

The most talked-about energy storage technologies, Pumped Hydropower [PHES], Compressed Air Energy Storage [CAES], and molten salt thermal storage in conjunction with Concentrating Solar Power [CSP-Tower] can clearly be seen to outperform both batteries and flow batteries for energy storage applications.  Note that the numbers are approximate.  PHES is shown on my graph as slightly less viable than CAES, but the balance of opinion favors the economics of PHES.  The CAES bubble may overstate the viability of that technology: there are only two operational CAES plants, which leads to considerable uncertainly in the construction costs for future plants.  Similarly, the Economics of PHES may be understated.  Each Pumped Hydro site is unique and has its own economics, and the best sites are likely to be considerably better than shown.  Such sites will have existing reservoirs that can be raised and lowered at will to reflect current electricity supply imbalances.  I discuss PHES in more detail here.

Hydrogen [H2], flow batteries, and conventional batteries are simply too expensive to be viable as an energy storage medium except in situations such as remote power, where transmission, demand response, and PHES or thermal storage are impractical.  While the economics of large scale energy storage for Hydrogen compare well with those of molten salt thermal storage, the high cost of fuel cells makes hydrogen storage nearly useless as a power resource, and the low round trip efficiency means that much energy is lost transforming electricity back and forth in to hydrogen.  Large hydrogen tanks are relatively inexpensive to build, but filling and emptying those tanks is too slow a process to be practical as a grid based storage solution.

Yet all these solutions pale in comparison to the virtual energy storage provided by high voltage transmission.  When a region has excess electricity, it usually makes much more sense to sell it to a neighboring region that can use it than try to store the electricity locally.  Hours or months later, the same transmission line can be used to re-import the power when relative prices in the two regions reverse, making a transmission line to a neighboring region act as if it were a connection to a battery with infinite capacity.

While the energy storage technologies on the right side of the graph are good for smoothing out long term imbalances between electricity supply and demand, short-term variations in supply and demand are best addressed by the cheap power resources towards the top of the graph.  The quicker the fluctuations that need to be smoothed, the more important it is that the technology be able to absorb or deliver power quickly, and the less important it is that a large amount of energy be stored for extended periods of time.

Three highly effective technologies for producing quick bursts of high power but without much energy storage capacity are flywheels (currently in their earliest stages of deployment by Beacon Power (BCON), Superconducting Magnetic Energy Storage [SMES] a technology provided by American Superconductor (AMSC) that has been shown to be able to maintain grid stability when events such as lightning strikes would otherwise overload the grid with large, sharp jolts of power, and ultra-capacitors such as those provided by Maxwell Technologies (MXWL) which are generally too expensive for grid based applications, but are beginning to find a niche in vehicles.  These technologies are not shown on the graph because I would need to expand the vertical axis multiple orders of magnitude upwards.

Among established technologies, Lithium-Ion [Li-ion], Nickel-Metal Hydride [NiMH] and Lead-Acid [PbA] batteries perform acceptably in remote grid stability applications where few other options exist, but all are eclipsed by the low cost and effectiveness of Demand Response. Demand Response is a suite of technologies which allow the utility to ask energy users to reduce their energy usage when the utility’s generation capacity has trouble meeting current demand.  Like transmission, but unlike batteries, flow batteries, thermal storage, PHES, or CAES, the electricity storage provided by demand response technologies is virtual: when a customer temporarily turns up the thermostat in response to a signal from the utility, the use of energy to cool the building is delayed until after the event when the customer drops the thermostat back to its usual setting.  This avoids the cost of physical electricity storage, and makes Demand Response the most economical way to meet short-term spikes in energy demand (such as on hot summer days when air conditioning demand is high) and short term supply shortfalls, such as when power plants fail to come online at the scheduled time, or when power output suddenly drops.

Recently, a heavy snow pack and a quick melt have caused the Bonneville Power Association (BPA) to shut down wind power generation for several hours each night in the Colombia Gorge.  This has wind farm owners (who stand to lose Federal tax credits for energy production) heading to court.  BPA claims shutting wind farms is necessary, but wind farm owners claim that two inexpensive solutions exist to deal with the excess power: Unused transmission capacity to Canada and Southern California, and the possibility of paying customers to shift their energy consumption from daytime to nighttime hours.  Both these solutions would cost BPA money, while their current approach of refusing to accept wind power at night is free.  This is why BPA chose not to honor its contracts with wind farms. While this makes economic sense for BPA, it sets a bad precedent because it was poor planning on BPA’s part to sign such contracts in the first place.  Should wind farm owners have to bear the financial consequences of BPA’s bad planning?  If they had known that BPA would not honor those contracts, they might have spent their capital in other regions of the country where the most productive season for wind does not correspond with the most productive season for hydropower.

In my opinion, this ruckus is more about industry players jockeying for position, than about wind being too unstable for the grid or incompatible with salmon.  Both Demand-Response and Transmission are existing, cheap ways to deal with the potential power surplus, and no matter what the courts rule, Demand Response and High Voltage Transmission are both key in allowing wind to achieve its full economic and development potential.  In fact,  Tim Healy, CEO of Demand-Response firm EnerNOC in a recent interview, said his firm has been helping BPA shed some excess power duing nighttime hours by turning some of their customers equipment on when it might otherwise be off.

I’ve written extensively about transmission stocks in my “Strong Grid” series.  I included the two exchange-traded Demand Response companies, EnerNOC (ENOC), and Comverge (COMV) in my recent list of Ten Clean Energy Stocks I’d Buy Now, because their prices are looking very attractive.  I’ve already written about World Energy Solutions (XWES), and I spoke with EnerNOC CEO Tim Healy about his company last week in preparation for a this article.  I plan to follow that with articles about Comverge, and EnergyConnect (ECNG.OB), an OTC-traded demand-response provider.