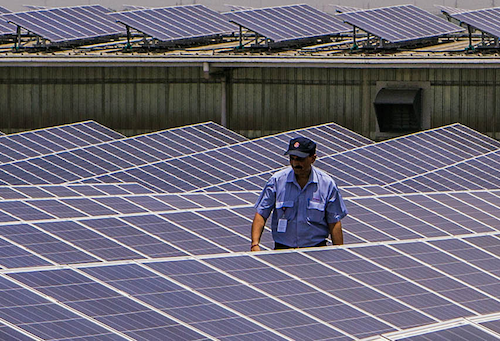 Record low Indian solar tariffs tendered at a groundbreaking auction may catalyze green investments and help tip the balance of new power to renewables and away from fossil fuels.

Solar power in India fell to a record 3.30 rupees (U.S. $0.05) a kilowatt-hour on Feb. 10 after a World Bank-backed auction helped the central Madhya Pradesh state tender 750 MW of power. The auction format, which included payment guarantees and was run by the state and central governments, could become a template fueling growth in other regions and bringing energy security to the world’s second-most-populous country.

“The outcome for this tender has shown that the holy grail of grid parity has been discovered,” said Basant Jain, the director at Mahindra Renewables Pvt., which won the right to build 250 MW of capacity in the auction. If the auction can be replicated, it would unleash exponential growth in Indian solar and make it the cheapest source of energy available, he said.

India is among a growing list of countries stretching from Asia to Europe that have used auctions to make clean energy more affordable. The result should help Prime Minister Narendra Modi’s government meet pledges to install 175 GW of renewable capacity by 2022 and spur discussion about whether solar can replace coal as India’s dominant source of energy.

The winning “bid brings the price of solar power in the same range as coal power,” said Ajay Mathur, a member of Modi’s Council on Climate Change, in an e-mail.

Solar may pass coal and account for all new capacity on the grid in the next decade, according to a Feb. 13 report issued by India’s Energy and Resource Institute.

Under scenarios projecting high levels of green power growth, and assuming “energy storage technology would become viable beyond 2027, the price of electricity from renewable energy storage achieves parity with the price of electricity generated from domestic coal sources at prices below 5 rupees a kilowatt-hour,” according to the report, titled “Transitions in Indian Electricity Sector.”

In a sign the government wants to leverage momentum built from the tenders in Madhya Pradesh, it printed colorful newspaper advertisements featuring pictures of Modi and pledging to determine if the auction format could be applied in other parts of the country.

Some of the prominent auction features that could be replicated in other states include:

“When you’re given a full template-ready project you can get rid of variability,” said Manoj Kumar Upadhyay, founder of domestic solar developer Acme Group, which also won 250 MW in the auction. Without the template, bids may have been as much as 29 percent higher, he said in an e-mail response to questions.

The tender format, which attracted 20 bidders competing over 36 hours, may also provide a boost to indebted state-run power retailers, according to Bloomberg New Energy Finance. The lower electricity tariffs will be more attractive to loss-making distributors, some of which have struggled to buy enough electricity from clean power developers.

“The fear is that media, government officials and analysts will hype up the low bids and other states will then start pressuring developers to match,” said Mercom Capital Group Chief Executive Officer Raj Prabhu in a statement.

The levelized 3.3 rupee tariff looks “aggressive from an equity holders’ perspective and returns may likely be in single digits,” ICRA’s head of power and renewables, Girishkumar Kadam, said in an e-mailed response to questions.