More
Home Baseload India Faces up to Its Failing Grid

Milan, Italy — In contrast to the explosive global media coverage of the failures of three of India’s five regional grids that left almost 700 million people without electricity, the publication of the Enquiry Committee’s Grid Disturbance report lit few fuses. It attributed the failure to a combination of climatic conditions with weak inter-regional transmission corridors due to multiple outages, the high loading and eventual loss of one link, and overdrawals by Northern Region utilities. Among an extensive list of technical and administrative recommendations, the report suggests applying the penal provisions of the Electricity Act.

But with load shedding schedules already dictating daily routines across large swathes of the country, the nation’s loss of face hurt more than the lost power. In fact, many corporate operations were unaffected, as they own generation facilities to insulate themselves from just such events. Annual energy conservation reports – obligatory among energy-intensive industries – reveal that Tata Steel generated 30% of its electricity. Costs ranged from Rs3.88 (US$0.07)/kWh for purchased electricity to Rs2.41 ($0.04)/kWh for steam turbine/generator (95% using by-product gases) and Rs37.49 ($0.68)/kWh for diesel generation. For energy-intensive industries with limited cogen possibilities, renewables offer an attractive alternative to the diesel gensets used for backup power to redress the country’s power supply/demand imbalance.

According to the latest available figures from its Central Statistics Office, India had almost 207 GW of installed capacity by March 2011, 64% from thermal generation and non-hydro renewables. Large-scale hydropower accounted for 18.2% and ‘self-generation’ for 16%. While India is the world’s third largest coal producer, producing 7.5% of the global total in 2010, it’s also the world’s fourth largest net importer of coal and crude oil.

For example, the nation’s domestic steel industry has had to import high quality coking coal to meet its energy needs. Large industrial consumers (the so-called ‘high-tension’ segment) have been hard hit by rising energy prices which have raised the prices of their products in export markets. The country’s sustained growth places enormous demands on scarce energy resources with peak deficits for electricity in the 12% range. With improvements in living standards, per capita energy consumption in India increased from 1204 KWh in 1970-1971 to 4816 KWh in 2010-2011.

Biogas is integral to the Indian subcontinent, home to the world’s largest cattle population. Introduction of a national biogas project in 1981 saw cow dung used to produce methane-rich biogas in domestic-scale family plants. But the 2010 launch of the Jawaharlal Nehru Solar Mission (JNSM), one of eight national missions forming part of India’s National Action Plan for Climate Change, aimed to propel the renewable energy sector into new orbits.

India’s 11th Five Year Plan (2007-2012) marks a definitive departure from the past, and is perceived as having finally given teeth to the renewable energy sector. As wind power, the sector’s mainstay, has achieved grid parity, the government abolished an accelerated depreciation incentive and refocused on sectors such as solar, which had previously been prohibitively expensive.

To be implemented in three phases, the Solar Mission targets an installed capacity of 20 GW of grid power (solar PV and solar thermal), 2 GW of off-grid solar applications, 20 million m2 solar thermal collector area and solar lighting for 20 million households by the end of the 13th Five Year Plan in 2022. The first phase focuses on modest capacity additions to the grid, along with off-grid power to serve populations currently without electricity, including applications such as power for irrigation pumps.

The vast majority of JNSM projects are located in the northwestern state of Rajasthan, India’s largest state by land area. It’s a magnet for solar power due to its high insolation, strong transmission networks and land banks prepared by the state’s government for on-grid solar projects. An arid region home to the Thar Desert, the state, under the auspices of the Rajasthan Renewable Energy Corporation, has been quick to piggyback on the perceived economic benefits from the Solar Mission by marketing itself as a manufacturing base: it already produces zinc, quartz and salt and hopes to lever transferable expertise from its existing glass and ceramics local manufacturing base.

Other states with dedicated solar policies include Gujarat, Karnataka, and Andhra Pradesh.

Initiatives such as the Solar Mission have been instrumental in raising the visibility of the renewable energy sector – and in attracting domestic and international investment. India had the highest growth rate for renewable energy investment in the world in 2011 with a 62% increase over 2010 levels to $12 billion. Of this, $11.6 billion was raised through asset financing, according to Bloomberg New Energy Finance. Of the total financing, $5.9 billion went to wind, $4.7 billion to solar and $0.9 billion to biomass and waste-to-energy. The highest growth came from asset financing in the solar sector which increased from $426 million to $4.6 billion.

Darius Pandole is a partner with New York firm New Silk Route Partners, and focuses on private equity investment opportunities on the Indian subcontinent. ‘Availability of equity capital is critical to the growth of the sector,’ he says. ‘A typical project has 70% debt and 30% equity but banks won’t provide loans without equity, and private equity is a valuable source of risk capital. Private equity also provides a wide range of value addition capability from sourcing key managerial talent to providing resources to deal with operational issues to assistance in strategy development.’

From an investor perspective, Pandole outlines three reasons why India is seen as a tremendous opportunity: increasing coal prices and the pressure on power generation to remain cost-competitive given that two-thirds of power generated in India is thermal; State Electricity Boards being allowed to raise prices and hence renewable energy achieving near-grid parity in terms of pricing; and a wide range of renewable resource availability.

Responsibility for renewable energy policy development and implementation in India is divided between the central and state governments. Depending on the state and energy source, incentives may include accelerated depreciation, tax exemptions, soft loans, FiTs and capital subsidies and exemptions from import duties, among others. Some states such as Maharashtra offer a range of FiTs based on differentiated wind zones. 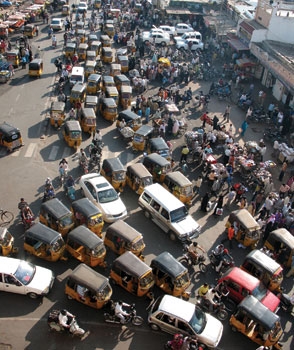 The Ministry for New and Renewable Energy (MNRE)’s annual report for 2011-2012 estimates gross installed capacity of grid-interactive renewable power at 23 GW in January 2012. Of this, onshore wind power accounted for 16 GW. Small hydro accounted for 3.3 GW, biomass power for 1.1 GW, biomass cogeneration for almost 2 GW, waste-to-energy for about 74 MW, and solar PV for only 481 MW. Off-grid and captive power generated another 671 MW, half of it from biomass cogeneration. Other significant contributors to renewable energy generation include family biogas plants (almost 4.5 million) and solar water heating with a collection area of around 5 million m2. Five states account for the majority of installed wind power capacity: Tamil Nadu (6.6 GW), Gujarat and Maharashtra (around 2.6 GW each), and Karnataka and Rajasthan (1.8 GW each). India places fifth in the world for installed wind power capacity, boosted by a strong domestic manufacturing base.

The central government shapes overall policy direction through initiatives such as the Solar Mission. However, in reality the success of a policy depends on implementation at the state level. While Pandole maintains that consistent government policy is critical to infrastructure development, he points to three shortcomings: inconsistency in policy formulation; insufficient attention to policy implementation, and a lack of investment in enabling infrastructure.

Pandole feels the government should be more proactive in actually implementing the policy and cites the 2003 Electricity Act to illustrate his point: ‘Allowing open access for power generators was watershed legislation for the energy sector but there has not been enough follow-through.’ Open access, established in the Electricity Act of 2003, allows ‘any licensee or consumer or a person engaged in generation’ to use India’s transmission lines, distribution system and/or associated facilities.

The state of Tamil Nadu, which has the highest installed wind power capacity, is a good example. Narasimhan Santhanam, co-founder and director of Energy Alternatives India, a research and consulting firm focused on renewables, describes how grid bottlenecks have led to turbines being shut down during windy days, even as load shedding continues to be a national problem. ‘Everybody thinks of the State Electricity Boards as the villain,’ he says, ‘because, in theory, wind power should have priority. But the chaotic way in which wind power developed in the state makes this difficult to do in practice.’

Since India’s renewable resources are not evenly distributed, in 2011 the government kicked off a renewable energy certificate scheme (RPO) to facilitate development of a pan-Indian renewable energy trading market. It is envisioned that utilities’ obligation to purchase 10% of their power from renewable sources will drive RPO trading. However, in Santhanam’s view the most effective policy measures have been FiTs and capital subsidies. ‘The RPO policy to drive demand doesn’t seem to have worked so well,’ he muses.

A major issue is non-compliance. Though the scheme was slow to get off the ground, the Indian Energy Exchange reported record trading in a recent (September 2012) auction. There were 191 participants (Discoms, or distribution companies, plus captive consumers and open access consumers) on the buy side and 182 eligible entities on the sale side. However, the Exchange stated, ‘The apparent over-supply is misleading since there is real shortage of renewable power generation in the country. If all obligated entities that include private and government-owned Discoms, Captive and Open Access consumers, would have bid to purchase RECs, the demand would have surpassed the supply many-fold. We need to push hard for compliance. When an instrument has been introduced which facilitates purchase of renewable power so conveniently, there should be no reason for non-compliance by small or big entities.’

The webs of Indian conglomerates which operate in heavy industries wield tremendous influence and favour on-site generation to free themselves from the vagaries of the grid. With self-generating industries accounting for 33 GW of national electricity capacity there is huge untapped potential.

While less energy-intensive than manufacturing industries, the new generation of IT companies also requires reliable power. Infosys, a global IT company with headquarters in India, has committed to using electricity from renewable sources only by 2017 in its Indian operations. Currently 20% of its electricity consumption is generated through off- and on-site renewable resources, mostly wind and hydropower. Almost 17% of its electricity is generated through expensive diesel used in generators and boilers, and as the cost of solar power rapidly approaches that of diesel gensets, the company is also turning to solar PV. As Santhanam says, ‘Large corporations used to think of energy as just a utility; now it can be used as a tool for competitive advantage.’

While Pandole thinks that ‘the need of the hour is consistent government policy and a coordinated approach with state governments in order to set up an enabling environment for infrastructure development’, he remains optimistic about the future. ‘India has suffered in the past from insufficient policy action,’ he says, but points to the success of the Solar Mission as an example of the power of government commitment. ‘When the government committed for 20-25 years, it really emboldened a lot of solar power project developers to bid for projects.’

While Santhanam feels that government policy has been the driving force for renewable energy development in India, he identifies the corporate social responsibility ethic as a nascent but potentially potent force for driving sector growth. ‘It is increasingly forming part of corporate brand equity,’ he says. ‘It adds to the quality of their product and perception as a sustainable company.’ Pandole, too, agrees that the impetus from the corporate social responsibility movement is extremely important for renewable energy.

Santhanam cites the recent opening of the ITC Grand Chola Hotel in Chennai – which intends to meet all its energy requirements through renewable energy – to illustrate his point. It is the world’s largest Leadership in Energy and Environmental Design (LEED) Platinum certified hotel, the highest rating provided by the US Green Building Council.