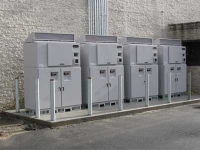 The emphasis placed on the cost of system component acquisition and installation though important, it is also vital to maintain a focus on what matters most in contributing to the economic justification of a commercial or utility-scale photovoltaic (PV) system: reducing lifecycle cost and maximizing energy harvest. The key to improving both factors is maximizing uptime, and the foundation for maximizing solar system uptime is predicting and improving system reliability in a disciplined and scientific way.

The emphasis placed on the cost of system component acquisition and installation though important, it is also vital to maintain a focus on what matters most in contributing to the economic justification of a commercial or utility-scale photovoltaic (PV) system: reducing lifecycle cost and maximizing energy harvest. The key to improving both factors is maximizing uptime, and the foundation for maximizing solar system uptime is predicting and improving system reliability in a disciplined and scientific way.

Solar equipment is subjected to harsh environmental conditions that can impact reliability. The thermal effects of placing electronic systems in outdoor sites that have high daytime temperatures inside the inverter and low nighttime temperatures can also affect system performance and serviceability. Problems are caused not just by the effects of high temperatures, but also wide temperature fluctuations, humidity, dust, and corrosives. Solar inverters, which typically represent some 6%-8% of the system cost, have caused about 80% of system downtime in the past, due in large part to the harsh environments in which they operate.

Design complexity and component count also affect system reliability and ultimately power output. Whereas typical hydroelectric nuclear, coal and oil-fired power plants can generate tens or even hundreds of megawatts per plant with relatively simple generating systems, megawatt-scale solar power plants typically involve thousands of components. A ten megawatt PV field, for example, may have more than 800,000 solar cells in 6,000 arrays with sun trackers and more than 40 inverters. Such large numbers require the application of statistical analyses in order to predict the reliability of the system as a whole. An analysis was done by Boeing and PV Powered engineers that included complete time-dependent thermal modeling of the critical components. Using the model it was possible to take into account different cooling strategies and how they could lessen thermal stresses on the components and optimize the reliability of the system for use in different geographic locations.

As a result of the three-year development program completed this past December, we have been able to deliver a completely new grid-tied utility-grade solar inverter that is designed for operating lifetimes in excess of 20 years – something that was completely unheard of just a few years ago. Completing this project involved developing new design rules and incorporating new materials selected to deliver maximum reliability and uptime. The new inverters have been developed using sophisticated software modeling that was brought from other mission critical industries including the semiconductor and aerospace fields, and the reliability of the new inverters has been proven through exhaustive endurance and accelerated life testing.

With proper attention to system element design, the modular design of solar power systems can actually contribute positively to the reliability of the grid as a whole. For example, large-scale PV power plants employ multiple arrays, inverters, and other system components arranged modularly such that single point failures cannot by themselves, or through a propagating fault, cause immediate shutdown of an entire field.

For our part, we have made system reliability a key design focus, and in the process established the inverter as the intelligent node in solar power systems. Beyond that, we are working with other players to maximize the energy harvest of PV systems. New technologies, such as active DC-DC power processing between the arrays and the inverter are being explored that may overcome system reliability issues. In addition, new “smart combiner” devices, placed between the arrays and the inverter, will implement monitoring and control tools that can contribute to power optimization and preventive maintenance strategies.

Maximizing the energy harvest of a solar power system goes beyond simply keeping it working, however, and the US government is providing financial incentives to make solar power systems more effective as an integrated part of the electric grid. For example, the US DOE funded SEGIS program (Solar Energy Grid Integration System) was created in 2008 and funded with $24M under the auspices of the government’s Solar America Initiative (SAI). The goal of SAI is to make solar energy cost-competitive with conventional forms of electricity from the utility grid by 2015.

A SEGIS development team led by PV Powered is working on several system integration and efficiency enhancing programs, one of them being the development of new MPPT algorithms. Maximum power point tracking (MPPT) is the process of varying voltage and current delivered by a solar array in order to maximize the energy harvested as the array output changes. As the power conversion efficiency of an inverter approaches the theoretical maximum, the accuracy and effectiveness of the MPPT algorithm processed by the inverter becomes one of the few remaining variables that can be optimized in delivering maximum energy harvest. The SEGIS team is testing an advanced MPPT algorithm under dynamic conditions using a range of solar array technologies, including several variations of thin-film arrays. The team is also researching how better forecasting of the sun’s irradiance can be used by inverters to smooth out fluctuations in the power that the utility sees.

With all the focus on improving the economics of solar power, it should be noted that there are other issues on the horizon that will need to be addressed soon in order to make solar power plants attractive to utilities as elements of their power generation portfolio. Some of these issues are command and control-related, and they are also receiving attention from the SEGIS program. For example, solar power plants must be able to communicate effectively with the power utilities so that they know when to connect to the grid to help shore up power shortage situations and when to disconnect from the grid to protect system components as in the case of a full grid power outage.

The challenges to proliferation of commercial and utility-scale solar systems have been significant, but with government funding and through collaboration of PV system component vendors and utilities, the prospects for a solar-powered America have never looked brighter.

Tucker Rubertireceived his BS in industrial engineering from Cornell U., an MS in environmental management and policy, from Rensselaer Polytechnic Institute, Troy, NY. He is the director of product commercialization at PV Powered, Inc., 20720 Brinson Blvd. PO Box 7348, Bend OR 97708 USA; ph.: 541-312-3832; email tuckerruberti@pvpowered.com.