More
Home Storage Hydrogen Stocks More than Double In 2013: Why the Pros Missed the... 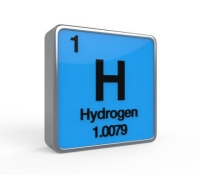 Plug Power (NASD:PLUG), a maker of hydrogen fuel cell systems for off-road vehicles is up 122 percent year to date.  Ballard Power Systems, Inc. (NASD:BLDP), which makes hydrogen fuel systems for a wide variety of applications is up 133 percent so far this year, and 149 percent from its mid-December 2012 low.  Hydrogenics Corporation (NASD:HYGS) makes hydrogen fuel cells, electrolysis, and storage solutions for stationary and portable power, and is up 122 percent year to date and 127 percent from its low a year ago.

Quantum Fuel Systems Technologies Worldwide Inc. (NASD:QTWW) has risen 146 percent this year and is up 261 percent from its low in April. Quantum provides fuel systems and drivetrain components for natural gas and electric vehicles as well as hydrogen fuel cell vehicles, so its rise probably has more to do with recent natural gas contract wins, but, with or without Quantum, the sector’s rise has been impressive. 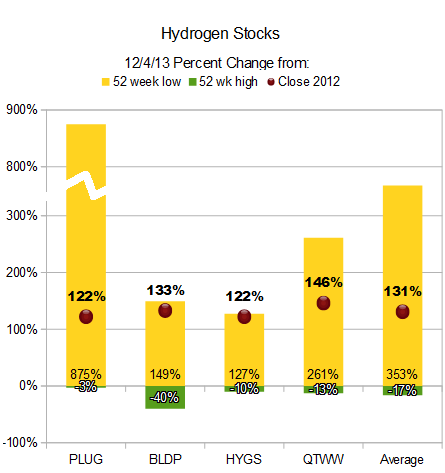 If I had to explain the rise, my best guess would be the recent string of announcements of fuel cell vehicles from major auto manufacturers.

But a lack of fueling stations means that fuel cell vehicles are unlikely to even rival electric vehicles when it comes to sales for many years to come.  If hydrogen stocks are rising on hopes for futures sales of fuel cell vehicles, that rise will become a decent if those sales fail to emerge.

Small investors have been the main buyers.  While institutional holders such as mutual funds have been buying, they have only been doing so in a small way.  During the third quarter, net institutional ownership increased from 15% to 16% of Ballard, from 3.4 percent to 3.8 percent of Plug Power, 5.7 percent to 6.3 percent of Hydrogenics and 2.3 percent to 2.8 percent of Quantum, according to Nasdaq data.  The changes amount to less than a single day’s trading in all four stocks.  Meanwhile, insiders have stayed entirely on the sidelines.

I recently asked my panel of green money managers if they’d been paying attention to hydrogen stocks, and those who responded gave a resounding “no.”  Their dislike of hydrogen stems from skepticism around the economics of the technology.

As Garvin Jabusch, co-manager of the Shelton Green Alpha  Fund (NEXTX) told me, “I’ve yet to be convinced… that there is a way to eke a profitable business model out of the space” because of the energy-intensive processes required to create hydrogen.  He thinks the recent roll out of fuel cell vehicles by Toyota, Honda, and Hyundai have a lot more to do with meeting California’s requirements for a minimum number of zero emission models than it does with expectations of selling a large number of cars.

Jan Schalkwijk, a portfolio manager with a focus on Green Economy investment strategies in Portland Oregon notes that recent history has taught us “ it does not pay to be too early” in green investing.  Although hydrogen technology is not new, but he thinks “its widespread adoption is not  in the cards” any time soon.

Rafael Coven, who manages the index (^CTIUS) which underlies the Powershares Cleantech ETF (NYSE:PZD), has always avoided hydrogen stocks and is “a LOT richer for it (i.e. not poor.)”  He says “Fuel cells require very, very deep pockets and a long path to profitability.  Big corporations have burned/burn through hundreds of millions of dollars in R&D and still have no profits on the horizon in this field.” 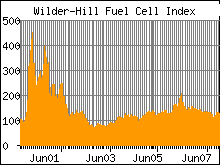 The last time hydrogen stocks caught investors’ attention was in the early 2000s.  Large automakers were launching fuel cell cars, just as they are now.  In another parallel to today, the launches at the time were due to promotion by the Bush administration and for compliance with emissions regulations in California.

Dr. Rob Wilder, who manages the index (^ECO) behind the PowerShares WilderHill Clean Energy ETF (NYSE:PBW) kindly allowed me to use the chart to the right of the Wilder-Hill Fuel Cell index, which his foundation maintained for internal research purposes from 2000 to 2007.  He notes that Ballard Power was included in the fuel cell index as well as ^ECO, which it remains in today.

As you can see from the chart, fuel cell stocks spiked rapidly, but then fell almost as quickly and never recovered. (Source: The Wilder Foundation. Disclaimer: This material was for Internal Research only and was absolutely not an investable Index, nor presented for those purposes.)

Note that not all fuel cell stocks are hydrogen stocks.  Ballard, Plug, and Hydrogenics make hydrogen fuel cells, while companies like Fuel Cell Energy (NASD:FCEL) make carbonate or solid oxide fuel cells which run at much higher temperatures on natural gas (methane) and other hydrocarbons.  The high operating temperature of such fuel cells makes them excellent for stationary combined heat and power operations, but generally unsuitable for vehicular or portable markets.

It is worth noting that Fuel Cell Energy is developing a version of its fuel cells which can produce hydrogen as well as electricity.  If they can commercialize it and the economics work, this may become a viable way to expand the hydrogen fueling infrastructure.

Are the current buyers of hydrogen stocks headed for another wild ride to nowhere, like fuel cell investors in 2001? Or, has long disappointment made the pros too cynical, and likely to miss out on an explosive opportunity?

For myself, I’m going to be watching hydrogen stocks rise from a safe distance.  I agree with my panel that the lack of fueling infrastructure and the energy and expense involved in creating hydrogen are likely to continue to consign hydrogen fuel cells to small niche markets for years to come.

I would not be at all surprised if hydrogen stocks double again from here, but I’ll expect that rise, if it comes, to be followed by a Hindenburg-like explosion rather than a smooth ride to investing profits.  If there are any survivors, it will be players focused on profitable niches, like Plug Power.

This article was first published on Forbes.com on December 5th and AltEnergy Stocks and was republished with permission.