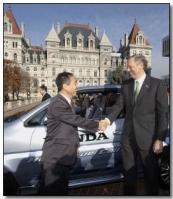 Albany, New York [RenewableEnergyAccess.com] Two Honda FCX fuel cell vehicles are being tested in the cold weather of up-state New York, but the technology is simply a novelty without the infrastructure to support it. Governor George E. Pataki has announced that the New York State Energy Research and Development Authority (NYSERDA) is giving $1.4 million in State funding for two hydrogen-powered vehicle demonstration projects in Buffalo and Albany.

The projects and hydrogen research are part of an effort to develop a sustainable hydrogen economy in New York that will attract new jobs and businesses for the 21st Century. “New York is a national leader in promoting the development and use of clean energy technologies,” Governor Pataki said. “Our continued investment in hydrogen-powered fuel cells and other emerging technologies is creating new jobs and economic opportunities for New Yorkers while helping to clean our air and reduce our dependency on foreign oil.” Earlier this year, President Bush announced a national hydrogen initiative that included ten partners in New York State was selected to participate in the $350 million hydrogen initiative program announced by President Bush earlier this year. The President’s initiative is designed to overcome existing technological obstacles to advance hydrogen and fuel cell technology. Projects receiving the NYSERDA funding have a total combined value of nearly $5.2 million, and will help demonstrate hydrogen’s safety and reliability as an energy source for daily use in both internal combustion engines and in fuel cell powered vehicles. Both projects will utilize hydrogen made in New York and will be managed by NYSERDA in cooperation with the New York Power Authority. American Wind Power & Hydrogen will receive $709,000 to convert the internal combustion engines on several light duty vehicles so their engines can use hydrogen. Vehicles slated for the conversion are owned by the University of Buffalo and the Niagara Frontier Transit Authority. Praxair will produce hydrogen for the project, which should increase fuel efficiency in the converted vehicles by up to 25 percent. Hydrogen production at Praxair is a by-product of a chemical manufacturing process. Power for the Praxair plant is supplied by Power Authority Niagara hydropower. American Wind will construct a regional fueling station in Western New York and develop a training program for vehicle technicians to work on hydrogen vehicles as part of the same project. American Honda Motor and Plug Power will receive $735,000 for a joint project to construct and operate fueling stations for two Honda FCX hydrogen-cell vehicles being leased by the State of New York. Plans for the stations were developed in cooperation with Air Products and Chemicals, and Homeland Energy. The project will focus on cost and reliability issues, code and siting concerns, and public acceptance of the stations. Hydrogen will be generated and dispensed by Plug Power’s GenSite product with added capability provided by an Air Products HF-150 mobile re-fueler. The Honda FCX vehicles are being leased by the State as part of Honda’s testing program to demonstrate the cold weather starting capabilities of the company’s fuel cell stack. NYSERDA will also fund an additional $50,000 feasibility study with SUNY Albany NanoTech and Plug Power to study the GenSite product’s application potential for the semiconductor industry. Peter R. Smith, President of NYSERDA, said, “These demonstration projects are an example of the State’s commitment to developing a Hydrogen Roadmap in New York. Working with NYPA and private businesses, we will demonstrate New York-developed generation equipment and fuel that will help grow our economy and attract additional research and investment into hydrogen and other emerging energy technologies.” The Rochester Institute of Technology (RIT) is working in partnership with NYSERDA, and has been named as one of four new Hydrogen Technology Learning Centers in the United States by the federal Department of Energy. The RIT Center will serve to educate students, potential end-users, local officials and the public about the vision of a hydrogen economy, hydrogen technologies and applications, the safe use of hydrogen as an energy carrier, and the challenges to achieving a hydrogen economy.