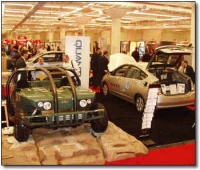 Washington D.C. [RenewableEnergyAccess.com] Hydrogen took center stage in Washington this week as the Secretary of Energy, industry and policy leaders from around the world, and more hydrogen- powered vehicles than have ever been assembled at a public event all converged at the opening of the NHA Annual Hydrogen Conference and Hydrogen Expo USA.

Organized by the National Hydrogen Association, the two-and-a-half day industry conference served as the center point for nearly a dozen associated industry meetings and activities in Washington for almost the entire week. In a special Department of Energy event at the conference shortly before noon, DOE Secretary Samuel Bodman signed recognition agreements with officials from four companies that are primary partners in the federal government’s demonstration programs to test and evaluate fuel cell and hydrogen technologies. Secretary Bodman also took advantage of the opportunity to inspect technology examples from the four companies: a hydrogen refueler from ChevronTexaco, and fuel cell vehicles from DaimlerChrsler, Ford and General Motors. Signaling the fast-growing emphasis on hydrogen development by state governments, the conference opened with the Secretary of California’s Environmental Protection Agency, Alan Lloyd, describing the importance of hydrogen in California and the importance of Governor Schwarzenegger’s California Hydrogen Highway Network, designed to foster public-private partnerships to expand hydrogen infrastructure in the state by 2010 and beyond. A special “Hall of the States” exhibit area at the conference highlights many of the initiatives being launched by states and regional organizations around the country. “Throughout the world people are searching for clean and sustainable energy, pathways that provide increased energy diversity and energy security. More and more we are seeing that hydrogen has a leading role,” said NHA President Jeffrey Serfass. “This week, top government and industry leaders are tackling head-on some of hydrogen’s toughest challenges and also reporting on exciting progress.” One measure of progress is the large number of hydrogen vehicles at the event. In all, seventeen hydrogen- powered passenger cars, SUVs, buses, and even a scooter and a racecar were on hand, and ten pre-production, demonstration vehicles were available for test rides. The four days of activities at the conference and expo touched on virtually every aspect of the industry and the technology. Topics from podium presentations and poster presentations were discussed during scheduled breaks, as were the long-term strategies by global energy and automotive companies, and small business development strategies and tools. Examples of corporate strategic development were seen and demonstrated in fuel cell and internal combustion vehicles, power production from hydrogen for large and small applications, renewable and other advanced production processes, small home hydrogen production units and large central production plants, storage system innovations, safety systems and safety training, codes and standards, demonstration programs around the world.