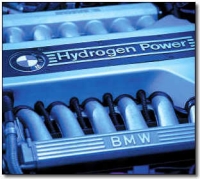 Berlin, Germany [RenewableEnergyAccess.com] Liquefied hydrogen will soon help a fleet of cars take to the streets of Berlin, Germany. The Clean Energy Partnership (CEP) and the BMW Group have collaborated with vehicle manufacturers and energy industry companies to open a hydrogen refueling station in the city. Hydrogen will be available in both a liquid and gas form along side standard gasoline pumps.

Involvement in the CEP Berlin is part of the BMW Group’s involvement in setting up an infrastructure for hydrogen vehicles under the Transport Energy Strategy (TES). More than ten partners from the motor and energy industry are collaborating in this group, and TES aims to introduce a countrywide supply network for hydrogen. The German government is backing and overseeing the work of this group. “The BMW Group has been driving forward the development of hydrogen vehicles for more than twenty years now,” said Christoph Huss, director of Science and Transport Policy for BMW. “With the opening of this hydrogen filling station in Berlin, all partners of the CEP have come a significant step closer to fulfilling their vision of turning sustainable mobility into reality.” According to the press release, BMW favors liquefied hydrogen because it boasts a higher energy density and gives vehicles a greater driving range. As a project partner in the CEP, the company is playing an active role in the demonstration program by running trial vehicles based on their hydrogen-powered 7 Series. BMW will offer customers a production car with a hydrogen combustion engine during the production period of the current BMW 7 Series. This will feature a bivalent drive that runs on hydrogen as well as gasoline. It will mean that the company’s flagship hydrogen vehicle can be filled with both fuels depending on availability and infrastructure.