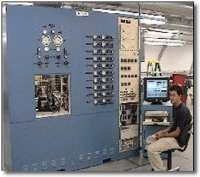 Honolulu, Hawaii – May 7, 2003 [SolarAccess.com] Located in a 4,000 square foot warehouse at HECO’s Ward Avenue property, the Hawaii Fuel Cell Test Facility currently houses three fuel cell test stands, with two more to be received by the end of the year. All stands are designed and manufactured by UTC Fuel Cells, a part of United Technologies Corporation’s UTC Power unit. “The facility gives us the opportunity to study fuel cells at a scale not normally available in academia,” said Rick Rocheleau, HNEI director. “And it’s another example of Hawaii’s increasing role as a leader in the development and demonstration of renewable technologies.” HNEI will run fuel cells through a battery of tests, using the test stands – devices which control testing variables and log data – to scrutinize and log performance and reliability measures such as long-term operability and sensitivity to impurities in the hydrogen gas fuel source. The test stands give the University of Hawai`i test capability not found at any other university,” said UTC Fuel Cells’ Vice President Brian McDonald. “The testing performed in this facility will help us develop reliable, cost effective fuel cells that will move us one step closer to the hydrogen economy and reducing our dependence on fossil fuels.” Gary Jensen, Director of the Office of Naval Research’s Greater Mid-Pacific Branch, points out the special interest fuel cells hold for the Department of Defense. “The list of potential portable power applications for military use is endless,” Jensen said. “Submarines, unmanned underwater vehicles and other military equipment are just a few of the possibilities.” Initial funding for the Hawaii Fuel Cell Test Facility was secured with the assistance of Senator Daniel Inouye through a US$1.5 million U.S. Department of Defense appropriation for research collaboration between HNEI and the Naval Research Laboratory under the Hawaii Energy and Environmental Technology (HEET) Initiative. The HEET initiative integrates research efforts on fuel cell development and alternative fuel sources such as biofuels and hydrogen-rich methane hydrates, an enormous energy resource found in seafloor sediments. “This joint effort between federal, state and private entities is exactly like the kind of collaboration it takes to move technologies like fuel cells from hopeful vision to commercial reality,” said HECO President & CEO T. Michael May. “Meeting Hawaii’s future energy needs will take a full array of energy options, including technologies like fuel cells and we’re committed to supporting their development.”