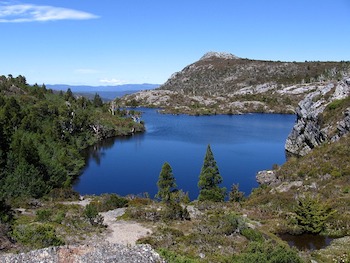 Chris Gwynne stands in a ravine below a towering dam in the Tasmanian wilderness and ponders whether the giant concrete structure can withstand the politics that may keep it from playing a key role in Australia’s clean energy future.

At a time when some lawmakers are pushing to prolong the country’s reliance on coal for electricity generation, Gwynne and his employer, Hydro Tasmania, are arguing for a A$5 billion ($3.7 billion) investment to transform the Cethana dam and others along its waterway into a giant battery. The aim is to use excess power to pump water from lower bodies to higher ones, where it can be stored for use when electricity demand is high and more supply is needed.

So-called pumped hydro — a long-established storage technology also proposed for the Hoover Dam, outside Las Vegas — could be a bulwark against the crippling outages that have dogged southeastern Australia in recent summers. While $40 billion has been invested in solar and wind projects in the past decade to replace retiring coal-fired generators, energy storage systems are needed to ensure sufficient supply during peak demand.

While pumped hydro costs more to produce per kilowatt than coal or solar power, the security that it adds to electricity grids increasingly reliant on renewable energy makes it invaluable. Also, the long lifespan of pumped hydro means these projects can provide a return on investment for a century or more, compared with a few decades for other sources.

For Tasmania, pumped hydro promises to double the island’s clean energy capacity to 5 gigawatts and feed an ailing national grid through a proposed undersea cable. Still, doubts linger over the project’s economic viability — with the financial model yet to be decided — and feasibility, after an existing cable broke two years ago.

“Pumped hydro is the technology of choice for large-scale energy storage,” said Gwynne, project director for state-owned Hydro Tasmania. “Nobody in the private market wants to go anywhere near building a new coal-fired generator. But the fact that there are some elements of our political system that still believe fossil fuels are the future gives us the opportunity to talk about why we don’t think it’s a good idea.”

Pumped hydro plants have been built in China, Switzerland, Israel and France amid a rapid roll out of intermittent renewable power. About 6.2 gigawatts of pumped hydro plants were commissioned worldwide in 2016, dwarfing the 688 megawatts of lithium-ion batteries that entered service, according to a 2017 report by Bloomberg New Energy Finance.

Prime Minister Malcolm Turnbull is one advocate. The former Goldman Sachs banker has backed transforming as many as 14 aging Tasmanian hydroelectric stations into modern-day pumped plants after a series of highly publicized blackouts and escalating electricity costs angered voters. A federal election is due to be held by next May.

Implementing the proposed projects would more than quadruple Australia’s pumped hydro storage capacity to 11.5 gigawatts, the world’s fourth-largest, according to the DOE Global Energy Storage Database. It would also provide a substantial buffer to balance volatility in the supply of wind and solar energy to the national grid.

“For Australia, pumped hydro can be a good option for managing the reliability of the grid,” said Bikal Pokharel, a research director at Edinburgh-based energy consultancy Wood Mackenzie. “However, the viability of pumped storage hydro will come down to the economics of the plant. Similar to the cost of charging a battery, there is a cost of pumping back hydro.”

Also, utilizing storage capacity from Tasmania is dependent on a 370-kilometer (230-mile) cable being built beneath Bass Strait to quadruple the transmission capacity from the island to Victoria state, the country’s industrial heartland. No agreement has been made on how or by whom the A$1 billion project will be funded. Hydro Tasmania, which operates as a monopoly operator in the state, expects financing to become clearer once pre-feasibility work is completed next year.

Factions within Turnbull’s own Liberal-National coalition, including former Prime Minister Tony Abbott, remain wedded to coal-fired plants. The decommissioning of aging coal generators and a dearth of new ones mean the fossil fuel’s contribution to the nation’s energy supply has dwindled to 65 percent from 90 percent over the past two decades.

“There’s a wonderful transition to renewables occurring in this country, but the question is, will this continue?” said Matt Stocks, a researcher in renewable energy at the Australian National University in Canberra. “Despite the political barriers, cost factors mean renewables should eventually defeat fossil fuels, but individual projects like the pumped hydro plans in Tasmania still have to prove their worth to the market.”

Pumped hydro is a vital component of Turnbull’s proposed National Energy Guarantee plan, which includes a mix of technologies designed to increase efficiency in a national grid that’s sometimes failed in periods of high demand.

The future of the plan may be decided as early as this month; leaders from states led by the opposition Labor party still oppose it on the grounds that its target for a 26 percent reduction in carbon emissions by 2030 is too low.

“It is a huge opportunity,” Turnbull said of Tasmania’s pumped hydro potential during a visit to the state last year. “The energy market is progressing, the evolution of it is very rapid, so I think the sooner we can see the opportunities here in Tasmania, the better.”

Despite Tasmania’s cost advantage, doubts linger about the plan’s viability. The state almost ran out of water in 2016 during a drought some scientists blamed on climate change, and had to turn to diesel-powered generators after its existing undersea cable to the mainland energy grid broke.

“The big barrier to the project proceeding is unlocking the transmission cable and convincing the market it will deliver a net benefit for all of the nation,” said Australian National University’s Stocks.

There has also been criticism of hydro, with the breakneck construction of hydroelectricity projects in developing nations coming into question after the collapse last month of a Laos dam connected to a $1 billion project backed by its Communist government as well as Thai and South Korean companies.

Hydro Tasmania’s Gwynne is adamant the plan is feasible and the nation’s energy future lies with pumped hydro. “Policy-certainty would help everyone because then we could get a clearer view on what the investment pathway would look like,” he said.

Note: Why pumped hydropower is necessary in a world increasingly turning to renewable energy was a big topic of discussion during the Grid-Scale Storage Summit, which was co-located with HydroVision in Charlotte, NC last June. Be sure to join us next year in July in Portland, Oregon.