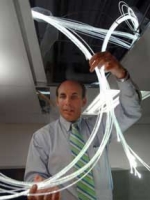 Oak Ridge, Tennessee [RenewableEnergyAccess.com] While hybrid solar lighting technology is still in its infancy compared to solar photovoltaic (PV) and solar thermal, the technology is slowly gaining recognition as a legitimate contender in the race to become a commercially viable technology. Set to enter the U.S. market in 2008, the hybrid technology recently earned the Excellence in Technology Transfer Award from the Federal Laboratory Consortium for Technology Transfer.

The award is presented to federal laboratory employees for outstanding work in the process of transferring a technology to the commercial marketplace. In this case, the award recognized a team of researchers at the Department of Energy’s Oak Ridge National Laboratory (ORNL).

One collector currently powers 8 to 10 hybrid light fixtures that can illuminate about 1,000 square feet of space. During times of little or no sunlight, a sensor controls the intensity of fluorescent lamps to maintain a constant level of illumination.

According to ORNL, the system is estimated to save about 6,000 kilowatt-hours (kWh) per year in lighting and another 2,000 kWh in reduced cooling needs for a total savings of 8,000 kWh per year.

“The Hybrid Solar Lighting technology is fundamentally different from PV and solar thermal,” said John Morris, president of Sunlight Direct, Inc., which licensed the technology from ORNL. “Our system transmits light in order to reduce the electrical need for lighting within a building. It does not convert sunlight to electricity but rather delivers the natural lighting directly into the building—with 50% efficiency.”

“For applications involving incandescent lamps, one HSL system typically displaces about 3,000 watts of energy use associated with lighting. At the current fully installed cost, that translates into about $5-$8 per watt. This is almost twice as cost effective as PV panels, which typically run $10 per watt fully installed,” said Morris, noting all costs are before rebates.

But as with many technologies being developed in the lab, the primary challenge now is to consistently demonstrate the efficiency of the hybrid technology system—and then increase that efficiency while reducing the price to the customer, said Morris.

Currently, there are 21 hybrid lighting systems being tested at various demonstration projects around in the U.S. including a Wal-Mart in McKinney, Texas; a Staples in Long Island, New York; a Braden’s Furniture showroom in Knoxville, Tennessee; The Naval Exchange in Hawaii; office space at San Diego State University; the Aveda corporate headquarters in Minneapolis, Minnesota; and ORNL’s Multi-Purpose Research Facility.

Sunlight Direct, Inc., is planning for the commercial release of the HSL technology in the first quarter of 2008.

The Excellence in Technology Transfer Award was presented to representatives of the Department of Energy’s Oak Ridge National Laboratory during the consortium’s annual convention in Arlington, Texas, last month. The Federal Laboratory Consortium for Technology Transfer is composed of more than 700 federal laboratories and facilities representing approximately 100,000 scientists and engineers.

In addition to this award, the hybrid solar lighting technology earned an R&D 100 Award and a Southeast Region Federal Laboratory Consortium Award in 2006.The technology was developed through funding by DOE’s Office of Energy Efficiency and Renewable Energy, Solar Technologies Program, along with a partnership of utility companies, state energy agencies, industry and universities.