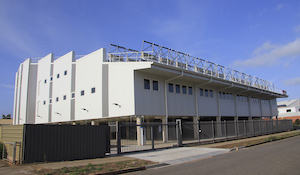 A four-story office building powered by a combination of thermal and PV solar and wind energy in South Australia has cut its connection to the electricity grid in what its owners claim to be a world first.

Fluid Solar House has been operating without the use of the electricity grid since April to test its technologies before this afternoon’s cord-cutting ceremony.

The building will be used as the small company’s headquarters but will also become a co-working space for other innovative northern suburbs’ startups.

Surplus electricity generated at the site will be used as part of Tesla’s car-charging network, with provision of 11 electric vehicle bays that will be charged completely by wind and solar power harvested from a 98 kWp array of 378 PV solar panels on the building’s roof.

A sustainable “tiny house” has also been built — in just three days — in the building’s car park to showcase the company’s low cost, low energy accommodation.

Fluid Solar Managing Director Roger Davies has been working on the technology since 2008 and said the solar thermal element was the key to the building’s success.

“Storage of heat is dramatically cheaper than battery storage and because we’ve got the other end, which is the devices that use thermal energy directly for their heating and cooling it means that 60-70 per cent of the building’s energy requirements are met using solar thermal as opposed to solar PV technology.

“That allows us to use the rest of the roof — about 60 percent — to do a conventional PV. So we have a hybrid model between a smaller battery pack running the lights, the lift, the fan systems and so on and the heavy lifting is done by the solar thermal.”

Wind turbines on the roof are also in place to fill the void for about 20 days in winter when long stretches of cloudy weather reduce the effectiveness of solar. The surplus electricity will be used to power the car charging station.

The solar thermal collectors have been granted an Australian patent, and we’re in the process of getting an international patent in several jurisdictions including China, India, Japan, North America and Europe.

They work by heating rainwater collected at the site to between 60C and 90C and storing it in a 10,000-liter insulated box. The hot water can be used to directly heat the building in winter and indirectly in summer to dry air and run evaporative cooling.

The building also has a turbine that turns low pressure steam into electricity.

“If you collect solar energy as heat, you store it as heat and you use it as heat, the whole process is intrinsically efficient and cost-effective and that is the trick to moving to a much lower energy consumption society,” Davies said.

The company is working on a system that can be retrofitted to existing office buildings.

“That’s certainly feasible from a technical point of view and once clients accept that it’s also economically attractive to them we see no reason why that technology couldn’t be rolled out across a large percentage of existing buildings.”

Fluid Solar has a 1200sq m factory in the nearby industrial suburb of Edinburgh. It has 24 orders for small houses, which range in size from 40sq m to 160sq m.

The houses are powered by similar renewable energy systems as the office building, can be run off-grid and can be built on site in a matter of days.

“Our order book is probably filled till Christmas but we’re certainly looking to have some projects moving into 2018 to keep the momentum going and build production,” Davies said.

“We’ve looked at 5000sq m as our next step up when demand picks up. I’ve got a joint arrangement with an existing manufacturing business to gear up and help build large volume if we can show the demand.”

Davies said the small modulated houses had a number of markets including as backyard flats, off-grid holiday homes and housing for people on fixed incomes.

He said the fast build times, low or no ongoing electricity costs and a price of about AU$1,000 per square meter compared with $1,200 – $1800sq m for traditional housing made them very affordable.

Fluid Solar has approval to build a 20-apartment complex in Munno Para, which Davies hopes to have installed before Christmas.

“One thing I would very much like to do is build these as medium density urban and suburban housing because we believe we can get the cost down to a point where people on low fixed incomes can afford to rent or buy over time,” he said.

“My belief is that our strategy of using a building that is intrinsically low energy consuming will ultimately become the dominant feature in architecture — we will move away from poorly insulated, glazed energy hot boxes and people will start to accept that the advantages of low consumption and low impact living are more important.”

South Australia leads the nation in the uptake of wind energy and roof-top solar with renewable sources accounting for more than 40 percent of the electricity generated in the state. However, the closure of two coal-fired power stations in recent years has increased South Australia’s reliance on energy supplies from the eastern Australian states, particularly in times of peak demand.

This article was originally published by The Lead South Australia under a creative commons license.