The European Commission’s Renewable Energy Roadmap identifies small hydro power as an important element in the EU’s future overall energy mix. However, there are a number of obstacles that need to be overcome if small hydro is to fulfill its potential and take its place alongside other, more mature renewables, say Gema San Bruno and Maria Laguna.

The most recent EU policy document promoting renewable energy sources, An Energy Policy for Europe: Communication for the European Commission, includes a Renewable Energy Roadmap with a binding 20% target for renewables’ contribution to the EU overall energy mix by 2020. The Roadmap identifies small hydro power (SHP) as an important ingredient in the energy mix.

In response to the European Commission’s Communication, the European Renewable Energy Council (EREC) published its own Renewable Energy Technology Roadmap up to 2020. The EREC response outlines industry thinking on how best to achieve the 20% renewable energy target by 2020. It sets out a detailed scenario on the expected developments of different renewable energy technologies and their contribution to meeting the target, with hydro power playing a leading role. Table 1 shows EREC’s figures on actual and projected growth of renewables in Europe to 2020.

Small hydro power is an efficient, secure, clean and sustainable resource capable of supplying both base and peak load generation. It has a long life, is easy to maintain and is highly reliable. Furthermore, it is domestically available and therefore largely avoids being subject to disruption by international political or economic events.

Discussion about climate change, transmission efficiencies and security of supply has led to arguments that large power stations burning fossil fuels should give way to smaller, renewable energy units sited closer to where the power is used. More than 60% of the total energy in coal or gas can be lost at the power station and a further 3%-4% is lost during transmission. The alternative is to move to forms of distributed energy from micro-generation, such as SHP. Today’s electricity market operates on a just-in-time basis to avoid the need for energy storage, but in a world of high fuel and infrastructure prices, along with planning obstacles to building more power stations, this is no longer desirable. Energy storage cuts the need for new generating and transmission capacity and also significantly improves the reliability of the grid. The most-developed and best-value proposition for energy storage is currently hydro storage, in which water is pumped from a hydro plant’s lower reservoir in off-peak hours to be released at peak times, and it also offers many synergies with other forms of energy generation.

Hydro power contributes to climate change mitigation because it does not produce greenhouse gas emissions (see Table 2), is renewable, and has a high energy payback ratio. 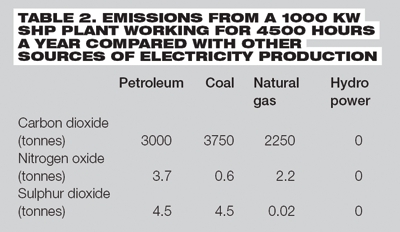 Overall, hydro power currently accounts for around 80% of electricity generated from renewable sources in Europe, and for 19% of total electricity production in Europe. Electricity from SHP contributed about 3% to the total electricity generation in Europe. Despite being a mature technology, hydro power still has a significant untapped potential. This potential comes not only in the development of new plants — particularly very low head SHP plants and pumped storage plants — but also in the upgrading of old ones. So of special interest for Europe, from both the economic and environmental point of view, is the exploitation of the high potential for upgrading, refurbishing and developing multi-purpose plants (for example electricity production combined with drinking water supply systems, wastewater treatment plants or irrigation channels) where the infrastructure is already in place. At the same time, a large proportion of the potential in Europe involves low-head and very low-head plants. According to the industry-led European Union Renewable Energy Export Strategy RES EU Export Masterplan 2002 the gap in Europe between exploited and economic annual hydro potential is about 250 TWh, corresponding to an installed capacity of 55 GW. A further 450 TWh/year (100 GW installed capacity) seems technically exploitable, but is not yet economically viable (Figure 1 shows the potential for hydro power in Europe and the rest of the world). It is estimated that 1-1.5 GW can be installed in Europe using existing dams, weirs and irrigation infrastructures, with little environmental impact. This would generate around 6-7 TWh annually. 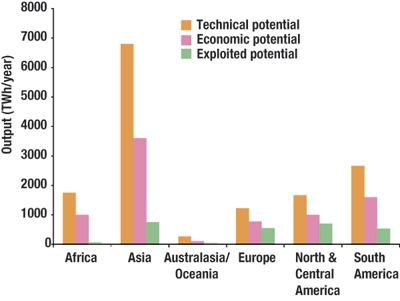 The main non-technical problem that is an obstacle to the development of SHP is the difficulty in obtaining the necessary authorizations and permits to build a new plant. Apart from the very long timescales required to process authorizations, procedures vary dramatically from one country to another and, in federal states, even between one region and another.

A recent survey carried out by the European Small Hydro Power Association (ESHA) among SHP associations in Europe shows that the average length of administrative procedures varies from 12 months in the best-case scenario in Austria to 12 years in Portugal (see Table 3). In most new EU member states the average time to acquire authorization is considerably shorter than in the old European countries. However, what is more significant is that only a few dozen authorizations have been granted recently. 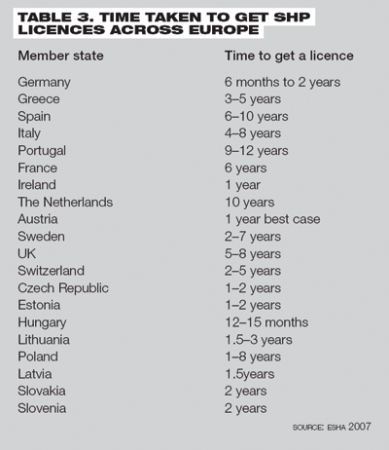 Different types of licences are required, and these are the responsibility of different authorities. In parts of Italy, for example, up to 58 permits from different administrations are necessary for some developments. In this context, procedures vary not only between member states, but also within states from one region to another and, sometimes, even between projects in the same region. In many instances there is a lack of transparency and objectivity in decision-making, with administrative bodies often sensitive to pressure from stakeholders. In addition, public consultation is a requirement for many proposed projects. As a result, the process in some member states can last up to 10 years or even longer for new developments. This discourages potential investors. The situation is generally less complex for refurbishment and upgrading projects.

The cost of permits for new development also varies from country to country, but typically requires an estimated €10,000-30,000. On average, investment costs for an SHP are around €1000-3000/kW, with a return on investment of between 10 and 20 years.

A further common obstacle is a lack of affordable connections to the grid, with poor co-ordination between different administrative authorities and the lack of ‘fast-track’ procedures for smaller projects adding to the problems.

It also calls for a fast-track authorization procedure for SHP and for refurbishment projects, noting that the same procedures are often applied to a development whether it is 50 MW or 60 kW, while authorization for some refurbishment projects can take longer than permission to build a new 30 MW gas power plant. Where appropriate, time limits should be imposed on authorities with a presumption in favour of authorization where an authority fails to process an application within an agreed timescale. Uncertainty over whether concessions will be renewed at the end of their time period, along with liberalization of the market, can also prevent owners of hydro power plants from investing in refurbishment.

In addition, incoherent implementation of the Water Framework Directive (WFD) will impact dramatically on SHP. In some member states, notably Germany and Austria, implementation of the WFD is one of the main barriers to further SHP development. The WFD aims to preserve the good ecological status of the water bodies in the EU and hydro power can be seen as one factor modifying the water bodies and their ecological status. The EU Member States will have to prepare water management plans which could lead to some rivers being classified as forbidden — this would affect the development of hydro power in general and SHP in particular.

The SHP situation demonstrates that the imposition of ambitious targets or economic support schemes, such as the feed-in tariffs or green certificates available in Austria, Germany, Italy and Spain, are not sufficient to overcome the structural barriers that currently prevent SHP from fulfilling its potential. If SHP schemes take years to receive authorization, then targets and financial support are effectively useless. Governments must commit to the creation of new frameworks to encourage the development of renewables such as SHP. It is essential to overcome the general impression that hydro power technology is already mature and fully developed. This leads to the incorrect assumption that the technology cannot be further developed and the subsequent belief that further investment support is not necessary. 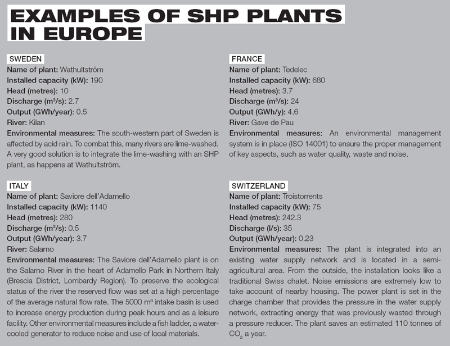