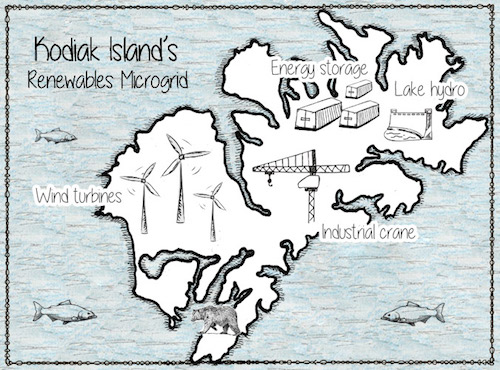 While most of the world struggles with stabilizing renewables on the grid, a small island in Alaska has it all figured out.

Kodiak Island, a place where you’ll find a self-sufficient community encircled by expanse wilderness, is known for its wild bears, its fish processing industry, and — of most interest to those in the energy storage sector —f or its nearly 100 percent clean energy microgrid.

Wind, water and energy storage are the elements that have almost completely sunk fossil fuels, enabling the island’s affordable energy rates and miniscule carbon footprint: two achievements many grid operators strive to attain for their own networks.

What follows are observations on how renewables were stabilized on Kodiak’s isolated microgrid and the critical role of energy storage.

The Problem with Diesel: Unclean, Uneconomical

The Kodiak electric utility had a tough nut to crack. The utility relied on diesel fuel to generate power, and while diesel provided a constant source of energy, it was harmful to the environment and economically volatile.

In a PBS News Hour report about the Kodiak microgrid, a representative from the Kodiak Electric Association indicated that the varying cost of fuel had a varying effect on the cost electricity: If the price of diesel went up, that meant increased costs for everybody on the island, including residents and major users such as the fishing processors and the Coast Guard Air Station.

On a per kilowatt-hour (kWh) basis, diesel is one of the most expensive forms of energy. Kodiak’s high expenditures on fossil fuels was the catalyst for shifting focus toward the renewable energy sources available to the island. A plan was devised to harness renewables in a way that would be economically feasible. It looks like the utility was able to achieve a significantly more affordable rate using renewables in lieu of fossil fuels.

But renewable energy comes with its own complexity. Clean energy sources such as wind and rain are intermittent. The grid always needs power, but renewable sources don’t always supply it.

Making an Unstable Source of Energy Stable (And Cost-Effective)

Another issue is cost. Renewables have tended to cost more than traditional energy sources. The renewable energy industry is, however, reaching the economic feasibility break-even point.

For example, the cost of solar has significantly decreased over time, and today the payoff for installing solar is a calculated in years not decades. Federal clean energy incentives have been instrumental in getting the renewable industry on its feet, but eventually it will have to stand on its own and be a competitive source of energy as those incentives phase out.

The cost is improving and renewable energy is expanding, especially in areas of the world where the conditions are right. But there is still the challenge of stabilizing an unstable form of energy on the grid network.

Kodiak Island had a strong start on the path to a renewables-powered microgrid because of its established lake hydro power and the 70 inches of rain the island receives yearly. The hydro plant converts water pressure into electricity and generates about 70 percent of Kodiak’s power, costing $30,000 per day to run, versus $100,000 per day to run the utility’s diesel plant, according to a recent report.

Hydro is one of the most stable forms of energy generation because the generators run continuously, so this really buttressed Kodiak’s strategy to set the diesel plant aside and take on another clean energy source: wind.

The utility installed six wind turbines, but wind is intermittent and doesn’t provide consistent energy to the grid. When the wind isn’t blowing, the hydro plant provides additional energy. But what bridges the gap between the wind dying down and the several seconds it takes for the hydro plant to ramp up?

Energy storage is Kodiak’s strategy for stabilizing wind’s inherent instability. Kodiak’s utility integrated a bank of batteries to bridge the short time between the wind dropping away and the hydro power ramping up to cover the energy demands on the grid. The batteries store excess energy generated by the wind turbines and release energy into the grid when the wind become still.

The battery bank solved the challenge of stabilizing the wind and water energy sources. But then came the problem of a new crane installed at the port.

The flywheel is a fast-spinning mechanical device that stores energy as kinetic energy. When the electric crane lifts a container, instead of pulling its peak power demand directly from the grid, it utilizes a flywheel to buffer energy locally. Stored energy is transferred from the flywheel into the potential energy of the container load. When the crane lowers down a container, the flywheel speeds up, taking potential energy out of the load and storing a large portion of it as kinetic energy so that it can be used again for the next lift.

First, ultracapacitors specialize in short-term, high burst power. The Kodiak microgrid needs 30 to 90 seconds of surge power to bridge the wind turbines and hydro — ultracapacitors are designed to provide fast-responding power for short timeframes. While batteries can fulfill this requirement, they may be placed under more stress to achieve high power and degrade faster than ultracapacitors. Batteries are better suited for longer-term energy storage versus high power requirements. Batteries may be supplemented with ultracapacitors to reduce degradation as a result of high cycling.

Second, it’s important to think about component durability in systems that are installed in rugged, remote locations. Ultracapacitors are electrostatic devices, and unlike batteries, not very susceptible to performance problems due to cold or hot weather conditions. Utility crew members will likely have to access the battery bank to complete maintenance tasks more often than they would with an ultracapacitor-based energy storage system.

While a flywheel is a reliable, high-performance energy storage option, it is fairly complex in its design with several moving parts, significant size and weight, and the amount of energy it expends for continuous operation.

The flywheel could be replaced with ultracapacitor energy storage, since both technologies are built for high-power, low-energy storage applications such as the crane and allow for many repetitive cycles with minimal degradation.

I expect that the benefits of the ultracapacitor over the flywheel would include reduced maintenance and significantly reduced energy needs for operation.

Adding ultracapacitor energy storage to the grid to support the crane’s peak power needs is just one option.

The crane issue brings up this final thought: What utilities and equipment manufacturers need to consider is that industrial equipment that repetitively makes large and highly variable power demands on the grid should also come with stabilizing energy storage. A wind turbine pumps power into the grid, and then suddenly that energy source disappears when the wind isn’t blowing. What then? It’s not enough anymore to simply provide the equipment without a solution for stabilizing it on the grid.

The utility is protecting Kodiak’s natural habitat by nearly eliminating the damaging effects of burning diesel fuel. The island is an exceptional example for harnessing clean energy and using efficient energy storage methods to ensure stable power for all those who rely on it.