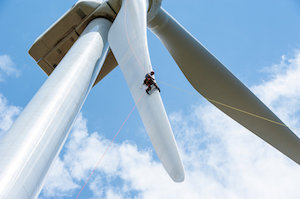 It would have been the first 100 percent community-owned renewable power project in North America.

Located just south of Swift Current, Sask., the $90-million project would have generated 35 megawatts (MW) of electricity from wind turbines and solar panels with electricity sold to the provincial utility, SaskPower.

But SaskPower had other plans for the region — specifically, a $700-million natural gas power station.

On Dec. 2, it was announced that the gas power station — which will emit one million tonnes of greenhouse gases annually, equivalent to putting 211,000 cars on the road for a year — wouldn’t require a federal environmental assessment.

In a final blog post, SaskWind president James Glennie wrote that the decision about the environmental assessment of the natural gas power station was “extremely disappointing, includes no justification and verges on the inexplicable.”

The gas-fired power plant is proposed to open in 2019 just northwest of Swift Current and generate 350 MW, 10 times more electricity than the renewable project.

The Canadian Environmental Assessment Agency’s decision not to review the gas power station was the final straw for SaskWind, Glennie told DeSmog Canada in an interview.

Many other factors added up to “stonewall” his organization’s push for community-owned wind power, despite the fact that Saskatchewan has an excellent wind resource.

SaskPower and the provincial government “refused to acknowledge our existence in four years,” Glennie said.

“We couldn’t have a debate or discussion with them.”

The story of SaskWind’s failed push for community-led renewable energy is about much more than one lost wind project — it’s about how better, cheaper, more sustainable and more democratic energy choices are pushed aside to maintain the status quo.

It’s a problem that’s plagued many of Canada’s provinces, like B.C. where a primary focus on hydroelectric development has forced out wind and solar power producers, or Ontario where large-scale nuclear and hydro kept small-scale and community-led energy production at bay for years.

Saskatchewan’s community-led wind projects could help the province break the spell, but first they’d have to be given the chance.

Glennie’s dream of a community-owned wind project in Saskatchewan seemed like a win-win-win. Job creation, emissions reductions and provincial profit retention are among the many benefits SaskWind outlines on its website.

But the province put up two big barriers, according to Glennie.

In 2015, 42 percent of Saskatchewan’s power came from coal-fired power plants and 34 percent from natural gas. Only 2.9 percent was generated by wind.

Rather than switching to less polluting forms of energy, the province has focused heavily on the controversial technique of carbon capture and storage (CCS) and building new natural gas power plants.

Carbon capture and storage is a process which captures carbon emissions primarily from coal-fired power plants for sequestration underground or to be used in oil and gas recovery. But the technology, which is costly, hasn’t been able to achieve the full-scale commercial success industry hoped.

In recent years 43 CCS projects worldwide have been cancelled, put on hold or simply gone dormant.

SaskPower’s carbon capture and storage project at the Boundary Dam coal power plant, which the province promised would provide “clean” coal-powered electricity, cost nearly $1.5 billion to build, effectively doubling the cost of power from $0.06 per kilowatt hour (kWh) to $0.12 per kWh from the facility.

SaskPower has since received multiple approvals for rate increases from the provincial government.

“Just coal by itself is only barely competitive with wind given the wind speeds and capacity factors that we can achieve in Saskatchewan.”

According to the U.S. Energy Information Administration (EIA), the levelized cost of new generation capacity for coal with CCS is $139.50 per megawatt hour. Natural gas costs $55.80 per megawatt hour, but doesn’t include any price on carbon.

Meanwhile, wind power costs $58.50 per megawatt hour, or about 42 percent of the price of coal with CCS.

Brett Dolter, vice-president at the Canadian Society for Ecological Economics, says carbon capture on coal is “one of the priciest ways to meet emissions reductions” and that it would be far more prudent to increase wind capacity and use gas and hydro as backup.

“If we look at a more Canadian perspective, it might make sense for Saskatchewan to even overbuild wind and export it to Alberta to help them get off of coal,” he says. “It’s such a great wind resource and right next-door.”

This is where the second source of “stonewalling” community-owned wind power comes in.

Saskatchewan has set a target of 50 percent generation capacity from renewables by 2030, requiring an increase of wind power from five percent of capacity to 30 percent.

Robert Hornung — president of the Canadian Wind Energy Association (CanWEA) — says Saskatchewan plans to procure about 1,600 MW of wind between now and 2030, which represents a “very significant and important short-term growth opportunity for the industry.”

(That’s in contrast to British Columbia, which CanWEA pulled out of in February because the provincial government’s decision to proceed with the Site C dam and other hydroelectric projects has effectively “crowded out the need for other forms of generation” until 2030.)

SaskPower is explicitly looking for utility-scale wind projects, mostly between 100 and 200 MW.

In a statement provided to DeSmog Canada, a SaskPower spokesperson said: “We do not have any specific plans for community wind projects and we are asking community projects to submit to the request for qualification, the same as all other proponents.”

But a minimum requirement of the request for qualification (RFQ) process — which will start in the first quarter of 2017 — is “experience in utility scale wind projects.”

“By definition there are none in the province that [qualify],” Glennie says.

A report by Adrienne Baker of Canadian Clean Energy Conferences noted this process could result in “many developers competing for a relatively small number of contracts,” with the implication being that resulting contracts would be for large megawatt wind farms, rather than community-scale projects.

Procuring wind with big request for proposal (RFP) tender processes has indeed worked; Hornung notes there’s been 10,000 MW of wind installed across the country in the last decade.

That’s come mostly from utility-scale wind farms owned by the likes of EDF Énergies Nouvelles, Capital Power, TransAlta and Brookfield Renewable Power. Nova Scotia did see significant success with its feed-in tariff for community-owned renewables (which was recently cancelled by the provincial Liberals).

“The procurement processes that we have in Canada that tend to focus very much on securing the lowest-cost power does tend to favour in a relative sense the utility-scale projects because they can capture some economies of scale that community-scale projects can’t,” Hornung said.

Yet there can be significant downsides to a top-down approach that can push community-level concerns to the wayside.

Because of this, there is some tension between large-scale wind energy producers represented by CanWEA, which include major players like TransAlta, Brookfield and Enbridge, and community wind energy advocates like SaskWind.

For Glennie, not having that community component can be detrimental to wind energy projects, something Ontario has experienced over the last decade.

There are now dozens of anti-wind organizations in Ontario, which boasts 3,923 MW in generation capacity from wind.

“Ontario doesn’t exactly have a stunning reputation of doing wind and solar,” he says. “It’s like ‘right, where we can screw up next? Let’s try Saskatchewan.’ ”

As Chris Turner noted in a 2015 article for The Walrus, Ontario’s Green Energy Act has been made “effectively defunct” and the key feed-in tariff gone.

Turner argued that much of the failure of the province’s Green Energy Act has to do with the institutional culture of massive Crown corporations, which tended to focus on large-scale nuclear and hydro projects at the expense of decentralized renewables.

Apparently the same type of “fiefdom,” as Turner calls it, is present in Saskatchewan.

“SaskPower is still built on that old sort of command-and-control approach that so many utilities have,” Bigland-Pritchard says.

There is already indication that some of the mistakes made with wind energy in Ontario could be repeated in Saskatchewan. In mid-September, an Ontario-based wind company planning to build the aforementioned 177 MW wind farm in southwestern Saskatchewan was rebuffed by local environmentalists concerned about impacts on migratory birds.

SaskPower plans to relocate the project.

It may be a sign of things to come.

“I don’t understand what the thinking was in SaskPower’s mind when they rejected [community-owned projects],” says Cathy Sproule, NDP opposition critic for the environment and SaskPower.

“It’s unfortunate. I like the idea of allowing communities to engage in this process, and I think you get better buy-in when wind projects go up.”

A SaskPower spokesperson notes that 20 MW of solar will be added to the grid by 2021 via community-based projects, with another 20 MW from First Nations communities.

That’s a practical objective: southeast Saskatchewan, where many of the coal-fired power plants are located, is one of the sunniest places in Canada, making it an excellent spot for solar.

But electricity demand in Saskatchewan peaks in the winter, and solar output is lowest then because of fewer hours of sunlight. Conversely, wind speeds are highest in the winter.

As Dolter notes: “Wind aligns better with the demand profile than solar.”

“Community ownership might be almost more of a social acceptance strategy than an economic strategy,” Dolter says.

“If you’ve got a rural municipality in Saskatchewan who has an ownership stake in wind, that municipality might be a lot happier with it than they are in Ontario where the ability for municipalities to say ‘no’ to wind projects was removed.”