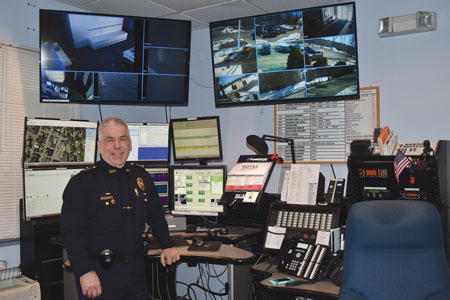 The little U.S. town of Sterling, Massachusetts is getting a lot of attention these days. Not only has the Sterling Municipal Light Department (SMLD) been winning awards for its new solar+storage microgrid, the town is also getting visitors from Germany, Japan, Norway and many other countries who want to check it out.

The visitors come to see an innocuous-looking metal shipping container at the utility’s electrical substation; the container houses two megawatts (MW) of lithium-ion batteries, capable of nearly four hours of continuous maximum discharge. The batteries, along with a 3-MW solar array, can be islanded in case of a power outage and will support the town’s police station and emergency dispatch center for at least two weeks – more with solar recharging – meaning Sterling’s first responders will be able to help people in need if a natural disaster knocks out the regional grid. But these resilient power benefits, however important, are not the reason for all the attention.

Sterling is in the spotlight because its municipal utility has shown it can use the new battery system to control rising power costs and achieve payback well within the system’s operational life. In fact, the $2.7 million battery system will pay itself off in about two years, with grant funding from Massachusetts Department of Energy Resources (DOER) and U.S. Department of Energy Office of Electricity (DOE-OE). But even without the grants, the system would still achieve a payback period of fewer than 7 years, which is pretty good considering that the batteries come with a 10-year performance warranty and are expected to continue to function significantly longer than that.

According to an upcoming paper by Sandia National Laboratories, which along with the Clean Energy Group/Clean Energy States Alliance (CEG/CESA), provided technical assistance to the Sterling energy storage project, the biggest energy cost savings potential from the batteries comes from reducing Sterling’s electricity demand during a single annual peak demand hour for the New England region. This regional peak demand hour generally occurs in July or August, and each utility in New England is assessed an annual fee for capacity services based on its individual demand during that one hour; and as utilities in the region are painfully aware, the cost of capacity has risen precipitously, and is expected to continue rising. 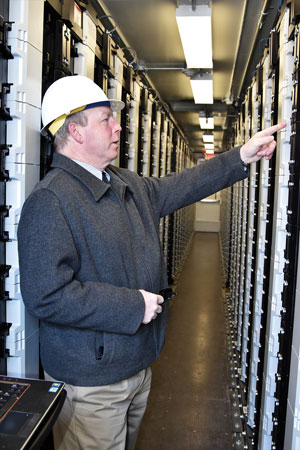 Green Mountain Power (GMP), using a similar battery and solar microgrid in Rutland, Vermont, demonstrated the value of capacity charge savings during the 2016 regional peak, on August 12. In one hour that day, GMP saved $200,000 in capacity fees by discharging its batteries (supplemented with PV generation) to offset electricity purchases. Sterling Municipal Light Department will attempt to do the same in 2017 and each year thereafter. This will benefit the town’s ratepayers, but it also benefits the entire New England region by reducing regional peak demand during the hottest days of summer.

A second source of significant cost savings for SMLD can be achieved by using the batteries to reduce utility transmission charges. These charges are assessed based on a single peak demand hour each month. As with the annual peak, if a utility reduces its demand during the monthly regional peak, it reduces its share of transmission costs for the entire month. In December 2016, SMLD successfully discharged its batteries during the monthly peak, saving its ratepayers $17,000 for one hour. That’s a significant savings for a municipal utility with an annual budget of 8.2 million. SMLD repeated this performance in February and March and, with the batteries now fully operational, SMLD hopes to continue to hit monthly peaks on a regular basis. Hitting peaks in 10 months out of 12 would mean transmission cost savings of $170,000 annually.

In addition, SMLD will use its batteries to engage in arbitrage – that is, charging the batteries from solar or from the grid during the night when prices are low, and discharging them for self-consumption when grid power is priced the highest. And SMLD can use the batteries to provide frequency regulation, a grid-balancing service that regional grid operators pay for on a daily basis.

With all these cost savings and revenues, SMLD conservatively estimates the economic benefits from the batteries are worth $400,000 per year to utility’s ratepayers. Of course, that doesn’t include some of the most significant unpaid benefits of the system, such as integrating the large amount of solar PV on Sterling’s system, reducing emissions from fossil-fueled power plants, and providing backup power in case of a natural disaster that knocks out the regional grid. It’s no wonder Sterling’s success is being closely watched by many other municipal utilities and electric coops in New England, several of which are actively working to build their own battery systems.

The Electric Grid of the Future

For more than 100 years, our electric grids have been based on big, centrally-located fossil fueled and nuclear generating plants, sending one-way flows of electricity down transmission lines to distribution utilities and their customers. In New England and many other regions, the whole system is regulated by the Independent System Operator (ISO), which makes sure that electricity supply exactly meets demand in real time. Because historically there has been no way to store electricity, balancing the grid has meant that every day, the ISO signals expensive and highly polluting gas ‘peaker’ plants to ramp their generation up and down, following a fluctuating load. Even when peaker plants aren’t actively delivering power, they are paid to be on standby.

If the above scenario sounds inefficient, it is; and all this excess generation (and excess transmission capacity) is extremely expensive. In fact, according to the recent State of Charge report from the state of Massachusetts, the top 10 percent of electricity demand hours each year account for 40 percent of the state’s electricity system costs – over $3 billion annually.

That’s all about to change. If a small municipal utility like Sterling can save big money by relying on its own batteries rather than remote and expensive peaker plants, other utilities can do the same. And when enough utilities install batteries, it will change the face of the grid. It will mean more renewables can be deployed, without the intermittency that can cause instability; more grid services can be provided by distributed resources close to load, increasing competition, reducing inefficiencies and opening markets; and more municipalities can take control of their energy purchases and costs. It will also mean more energy resiliency in local communities, where solar+storage can provide critical backup power during emergencies.

That’s a new electricity business model that lowers costs, is good for the environment, and potentially saves lives.

Todd Olinsky-Paul is Project Director at the Clean Energy Group/Clean Energy States Alliance and is a frequent contributing writer for Renewable Energy World.

The economic case for the Sterling energy storage system was explored in a webinar last spring, with guest speakers from SMLD, Sandia, and DOE previewing Sandia’s paper on the topic. Slides and a recording of this webinar are available at the link above and you can click here for additional resources and information on the Sterling project. 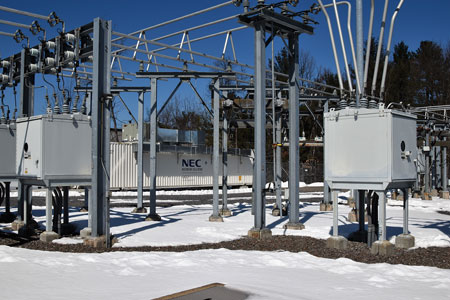 The Sterling energy storage system was supported with grants from Massachusetts DOER and U.S. DOE-OE. Technical support was provided by Sandia National Laboratories and CESA as part of the Energy Storage Technology Partnership (ESTAP); and by CEG with support from the Barr Foundation.