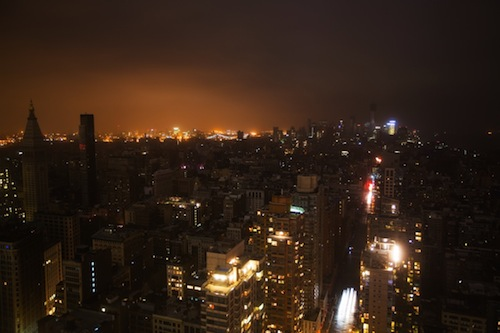 New York’s antiquated infrastructure was in trouble long before hurricane Sandy. The bulk power system, designed to meet a peak demand 75 percent higher than most of America, is underutilized most of the day. New Yorkers have been paying some of the highest electrical bills in the nation, so that air conditioners have power during the hottest summer days. Hurricane Sandy revealed the vulnerabilities of the low-lying Atlantic state’s grid. Governor Andrew Cuomo’s response is a plan calling for New York’s statewide adoption of community utilities, or Community Choice Aggregation (CCA).

“This is the most innovative energy initiative to come from a state level, and a governor, in the United States. California has a very ambitious renewable portfolio standard and ambitious greenhouse gas reduction targets, but no plan to get there. New York is taking the bull by the horns around the need for localization to deliver the change. This is something that has been lacking in states that set targets for adopting percentages of renewable energy, but tend to be blind to the location of the energy,” said Paul Fenn, President of Local Power, Inc.

Around 9 percent of New York’s electricity is lost, every year, because it originates from distant power plants. Transmission lines are full of power that travels hundreds of miles before being used.

This causes problems at the substations where streams of electricity converge. (There can be so much traffic on the line that substations sometimes overheat, or equipment might fail anywhere along hundreds of miles of transmission lines, causing blackouts or brownouts in entire regions.)

When hurricane Sandy struck, the whole grid went down for days and some areas did not get power back online for months following the storm — and the power markets responded by doubling rates for the Winter — a major economic blow throughout the state.

New York’s solution is for local communities to form their own utilities that utilize local power sources and the most cutting-edge smart technologies available. Fenn calls this CCA 2.0 (Community Choice Aggregation 2.0).

Fenn is one of the founders of the CCA movement, co-authoring America’s first landmark CCA bill in 1994 as well as similar laws throughout the U.S., drafting a CCA 2.0 law for California that passed in 2002.

Governor Cuomo took the initiative in February, bypassing the legislature and ordering state regulators to develop CCA in New York as a statewide platform for municipalities to develop Distributed Energy Resources and expand choice for all customers. CCA, a key component of the Governor’s “Reforming the Energy Vision” proceeding with state regulators, will mainstream microgrids and advanced onsite power technologies for enhanced local energy resilience and better deals for small customers in a deregulated electricity market, traditionaly focused on serving large customers that has not traditionally served most businesses and residents.

One of the key questions confronting New York was, how do you give utilities a role without allowing them to distort the path of technology development? The answer was to create a firewall, so that utilities will not be allowed to own sources of distributed generation.

Fenn said that while solar is always popular with activists, communities need to develop the energy sources that are most applicable to their local situation.

He added that many of the confrontations around renewable energy development that we see throughout North America arise because of the lack of local control. Industrial scale fossil fuel  — and renewable — projects are being imposed on rural communities, who usually derive little benefit. The energy, and profits, go elsewhere. Local governments are left with the problems.

CCAs enable communities to take control. They can choose the power sources they want, develop local resources and have a vested interest in seeing that problems are resolved.

“Being municipalities, they also possess tools and authorities that are needed to develop distributed energy resources on existing buildings in dense urban areas. They own public rights of way and sidewalks, control zoning and permitting of development activities, and are the traditional planner and developer of the built environment,” said Fenn.

Four New York communities have already opted to form their own CCAs. Though the state has not completed the regulations, with CCA 2.0 many have implicitly requested local green jobs and economic development. They are also changing their business model to let communities control, and customers own, significant parts of their power.

Lead image: Manhattan suffered a widespread power outage during the storm. Photo by Hybirdd via Flickr (CC By SA, 2.0 License)