A new report details the efforts of these front groups to eliminate clean energy policies across the country. The fossil fuel lobby aggressively uses lobbying and propaganda to achieve their goals. Self-identified “free market think tanks” are among the most effective advocates for the fossil fuel industry to lobby for policy changes. Dozens of these so-called free market organizations, a majority of which are members of the State Policy Network (SPN), worked to influence state level energy policies and attack the clean energy industry.

These organizations are usually described in neutral, nondescript terms, such as “think tank,” “institute,” or “policy group,” but publicized internal documents from the American Tradition Institute, Heartland Institute, and the Beacon Hill Institute suggest that these types of organizations embrace transactional relationships with the corporate lobbying interests that fund their operations.

The Beacon Hill Institute, a “think tank” based out of Suffolk University (and a Koch-funded member of SPN) submitted a controversial grant request to the Searle Freedom Trust, a prominent conservative foundation, in they expressly stated: “Success will take the form of media recognition, dissemination to stakeholders, and legislative activity that will pare back or repeal [the Regional Greenhouse Gas Initiative (or RGGI)].” In other words, the Beacon Hill Institute proposed to pursue biased economic research to support the express goal to “pare back or repeal” a regional climate change accord — all before the institute performed any research determining the economic effect of the law.

Another example of the pay-to-play nature of these so-called “think tanks” comes from Heartland Institute’s Internal fundraising documents which stated: “Contributions will be pursued for this work, especially from corporations whose interests are threatened by climate [change] policies.”

Despite positioning themselves as ideologically-focused on smaller government, dozens of these organizations aggressively denounce policy investments in clean energy as market-distorting and unnecessary, while remaining silent on the far-larger, decades-old stream of taxpayer dollars and policies supporting oil, gas, and coal interests.

Over the years, government support for fossil fuels has come from a variety of sources: tax deductions, tax credits, direct subsidies, cheap access to public property, pollution remediation, research and development, and entire government agencies devoted to helping promote and assist fossil fuel industry growth. By all credible measurements, fossil fuel subsidies are massive and extremely unpopular, and are flowing to some of the most highly profitable industries on earth. Yet, fossil fuel subsidies go largely unmentioned by these “free market” groups, such as the Heartland Institute, despite their avowed opposition to wasteful government spending.

Fossil fuel-funded front groups operate in multiple areas to influence the policy-making process in their attempts to eliminate clean energy policies. First, groups like the Beacon Hill Institute provide flawed reports or analysis claiming clean energy policies have negative impacts. Next, allied front groups or “think tanks” use the flawed data in testimony, opinion columns, and in the media. Then, front groups, like Americans for Prosperity, spread disinformation through their grassroots networks, in postcards mailed to the public, and in television ads attacking the clean energy policy. Finally, lobbyists from front groups, utilities, and other fossil fuel companies use their influence from campaign contributions and meetings with decision makers to push for anti-clean energy efforts.

Instead of advocating for a fair and free market for electricity, over the past year and a half, fossil fuel front groups have advocated to repeal, freeze, and eliminate pro-clean energy policies across the country on behalf of allies and funders in the fossil fuel industry.

This is an exceprt from a new report, issued today by the Energy and Policy Institute entitled “Attacks on Renewable Energy Standards and Net Metering Policies by Fossil Fuel Interests and Front Groups 2013-2014.”  You can download the 35-page report at this link. 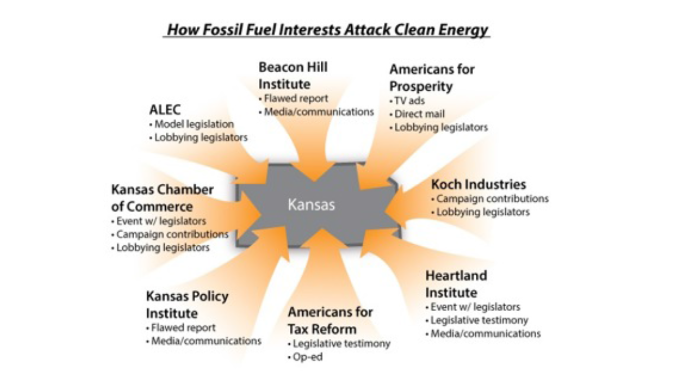