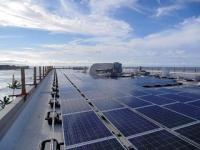 Hawaii’s lead utility Hawaiian Electric (HECO) and other utilities in the islands have found that solar photovoltaics installations have grown far faster than their isolated grids can adapt to the intermittent flood of peak time energy. With an electricity tariff at least double the U.S. average, fuel-constrained Hawaii is a rare and now leading U.S. market where solar has reached parity with other energy costs.

Indeed, storage is now the best bet for warding off the specter of solar plant curtailment in Hawaii, now a showcase market because of both its potential and its problems, reckons Drew Bradley, the Hawaii regional manager for REC Solar. “Hawaii has a bright future for solar growth if you are thick-skinned, and willing and able to navigate quite a bit of friction,” he says. “It’s a different market from the continental 48, with nuances, because there is no adjacent state to leverage distribution or transmission problems, which creates challenges and opportunities,” he adds.

To cope with the difficult-to-manage solar boom, HECO, in May, opened bidding for one of the largest energy storage projects in the country: a 60- to 200-megawatt storage project to help manage solar power within the Oahu island grid by 2017. HECO explained the project with a simple statement: “One of the greatest technical and commercial obstacles for renewable energy is energy storage.”

Similarly, Kaua‘i Island Utility Cooperative (KIUC) in March issued an RFP calling for a storage solution for “over-generation during the midday hours in order to avoid curtailment of low-cost renewable energy.” KIUC also is seeking “to be able to dispatch stored energy to assist conventional units in meeting the significant ramp event…each afternoon as the system load heads toward the daily evening peak…(a more than) 40 MW increase in approximately four hours.” A final goal of the RFP is “to be able to shave the evening peak, which is currently the highest cost period to generate power.” The island now has 26.4 MW of solar installed.

One demonstration storage project commissioned last year by the Hawai’i Natural Energy Institute (HNEI), was a 2 MW lithium-titanate battery installation by Reno-based Altair Nanotechnologies. Their ALTI-ESS Advantage energy storage system was built for a grid stability demonstration project. “The project has operated at the highest level and has been very successful; we will publish results soon,” says Larry Cutshaw, the HNEI’s Department of Defense technical program manager when the project was commissioned. The DoD’s Office of Naval Research (ONR) paid for the research as part of its alternative energy program.

Three other storage demonstration projects are being fostered this year by The Energy Excelerator, a startup program of the Pacific International Center for High Technology Research (PICHTR), dedicated to solving the world’s energy problems, starting in Hawaii, says Dawn Lippert, the director of the Excelerator, in Honolulu. With funds from the Excelerator, ONR, the state of Hawaii and private sources, 17 different energy storage demonstration projects were underway in Hawaii last year, Lippert says. The projects have included storage companies like Altairnano, International Battery, NEC – which recently acquired A123 Systems, Saft, Sempra and Younicos – which recently acquired Xtreme Power.

Storage should boost Hawaii solar installations once it has been sufficiently adopted. Honolulu already ranks fifth among U.S. cities for per-capita solar installations, with an estimated 265 watts per person, according to data from the Solar Energy Industries Association and Environment America, both based in Washington. One inducement from the state is a 35 percent tax credit for solar installations, as California offered to jump-start its solar market. The Hawaiian subsidy is expected to help the state reach its goal of 40 percent renewable energy by 2030.

San Luis Obispo, CA-based REC Solar, now a stand alone commercial solar developer, recently began work on a $54 million a 12 megawatt solar array in Anahola for Kaua‘i Island Utility Cooperative (KIUC) that includes a 6 MW lithium-ion battery storage system. The project is expected to be in operation by early 2015, and will generate electricity at a cost of about 12.5 cents per kilowatt hour compared to about 24 cents for electricity created by burning oil, REC says.

The typical Hawaiian utility approval queue for solar projects is long, and wraps around several corners, suggests Bradley. “Residential and commercial permit issuance had been an escalating up until the end of last year but is now on downslide because of interconnection issues and friction involving feed-in-tariff projects,” he says. “Often a technical interconnection review with the utility will trigger a supplemental and more technical review, and at completion of that, a full engineering study may be required, which can throw a project schedule off by six months,” he laments. “As a result soft costs can be staggering compared to other places in the United States,” he explains.

On the bright side, once these problems have been solved for Hawaii, the model can be adapted to many islands. “Hawaii is ahead of other markets with bigger loads and grids, and storage will get a foothold here and in California first; then the solution here will be rolled out to islands in the rest of world,” Bradley surmises.