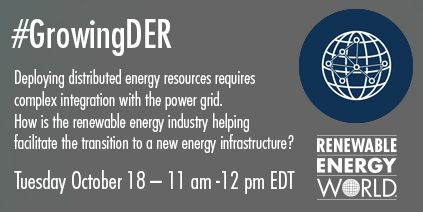 The evolution of power grids around the world is being driven by a move away from large centralized generation to the development of small power sources — or distributed energy resources (DERs) — that, when aggregated, can meet local power loads.

As DERs, such as storage systems and solar and wind power, advance quickly, their integration with the traditional power grid requires rapid adaptation by the power industry. How is the renewable energy industry helping facilitate that transition to a new energy infrastructure?

Renewable Energy World will explore that question and more about DERs in its upcoming #GrowingDER Twitter chat on October 18 from 11:00 a.m. to 12:00 p.m. Eastern. Join us via #REWchat as we explore technical advancements, policies, projects and studies that are defining next-generation power systems, and share your insights on what the renewable energy industry is doing to deliver a smarter grid in the future.

We will also focus on DERs as part of a conference track during Power Generation Week in December. You can learn more about the DER track and other tracks by clicking here.