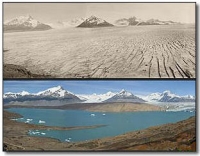 The environmental activist organization, Greenpeace, is calling for more renewable energy after new visual evidence of the impacts of climate change was released in Patagonia. Dramatic new photos of Patagonian glaciers taken by the research team on board the Greenpeace vessel Arctic Sunrise show the extent to which climate change has caused the ice to melt this century, when compared to photos of the same glaciers taken in 1928.

Buenos Aires, Argentina – February 19, 2004 [SolarAccess.com] “Rising temperatures are causing glaciers to melt all over the world. In Patagonia, they are disappearing at a rate of 42 cubic kilometers every year – faster than anywhere else on Earth”, said Greenpeace campaigner Vanessa Atkinson. “New Zealand glaciers are also in an overall pattern of retreat. Climate change is the trigger and the reason behind the speed at which glaciers are retreating.” Greenpeace has been touring Patagonia and Chile for 4 weeks. The research team’s findings confirm that a number of large glaciers, such as the San Quintin and Upsala glaciers, part of the Northern and Southern Patagonian ice-fields, have significantly thinned and have retreated several kilometers in recent years. According to Greenpeace, from 1995 through 2000 the rate of ice loss from the Patagonian ice fields has more than doubled, to an equivalent sea level rise of 0.1 mm (0.004 inches) per year. Greenpeace experts claim that the sheer volume of melt water from glaciers is causing the sea levels to rise (1), increasing the risk of flooding in many of the world’s coastal areas and also causing problems for people who depend on the glaciers for their fresh water supply. Greenpeace said that this might cause enormous problems in the future given that a third of the world’s population (2 billion people) rely on rivers fed by Himalayan glaciers alone. “Climate change is a global problem,” said Atkinson. “Not only do we risk losing the world’s glaciers but we are already witnessing increased frequency and severity of floods and droughts, loss of coral reefs, sea level rise and a rapid spread of diseases such as malaria.” According to Greenpeace, renewable energy technologies and industries, which are poised on the brink of a revolution, only need political support. Greenpeace is inviting world leaders to attend an international renewables conference, to be held in Bonn from June 1 to 4, 2004. “Clean renewable energy is key to addressing climate change,” said Atkinson.