Fear of the disintegration of the Euro resurfaced in May, sending all stocks downward. Clean energy stocks once again fell more than the market as a whole. Possible causes are that many clean energy sectors are exposed to further loss of European subsidies, and that clean energy stocks tend to be more volatile than the market as a whole, with both up and down moves being magnified. The Russell 2000 index (which I use as a broad market benchmark in this series) was down 7.1 percent in May, the Powershares Wilderhill Clean Energy ETF (PBW), was down more than twice as much, with a 14.6 percent decline.

This month, my strategy of avoiding the most subsidy -dependent clean energy sectors once again reduced my losses compared to PBW, with the equally-weighted portfolio of 11 stocks declining by 12.1 percent (total return.)  My losses might have been reduced more if I did not have fairly heavy exposure to European companies (Veolia (VE), Rockwool (RKWBF, ROCK-B.CO), and Accell Group (ACCEL.AS), but I don’t regret the decision to invest in Europe.  Like Nassim Taleb, I think the structural problems in Europe are only more obvious than those in the United States.  In the longer term, we’re likely to have more problems here.

As is to be expected in a down month, the hedged portfolio did a little better, declining only 10.2 percent.  Since my hedge is a long put, we can expect it to supply more protection than it did this month if the market continues to decline.  On the other hand, if the market stabilizes or rises, we can expect the hedge to return to being a drag on portfolio performance.

While every single stock and index (with the exception of the hedge) was down. The performance of the individual stocks in the portfolio are detailed in the chart below.  All percentages are in terms of the stock price at the start of the year. 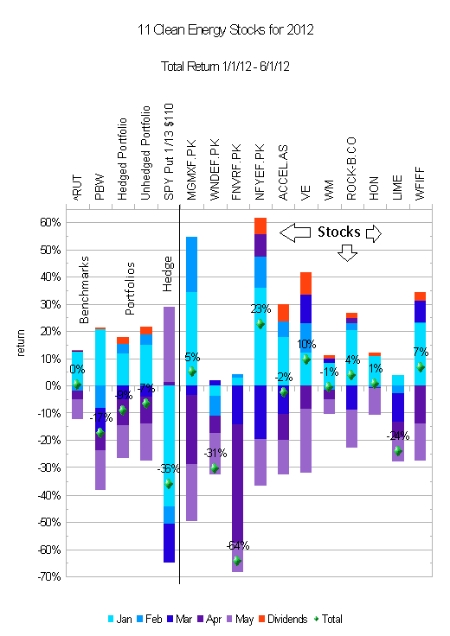 The portfolio’s worst performer in terms of stock price was Veolia (VE), which fell from $13.74 to $11.20 (a 23 percent decline.)  However, much of that decline was due to the stock trading ex-dividend, so the loss in terms of total return (with the dividend added back in) was only 15 percent.  Although it’s a global company, Veolia is based in France, which easily accounts for its relatively large decline.

In terms of total return, the largest decline was felt by Alterra Power (TSX:AXY / MGMXF), which fell by 24 percent, on the heels of a 25 percent decline in April.  In May, Alterra announced the acquisition of four wind development projects in British Colombia, and announced the resignation due to conflicts of interest of a director who would be taking a job at the company’s auditor, KPMG.  Overall, Alterrra is still up for the year, and since there was no negative news of note, I think the decline was simply due to investors looking to sell one of their few stocks which were up for the year.

New Flyer Industries (TSX:NFI / NFYEF) saw a decline of 16 percent after dividends, despite generally good news: A competitor closed up shop, there are signs of renewed strength in the market for transit buses, the company announced a partnerships to develop a new smaller “midi” bus, and unveiled a new battery-electric bus prototype.

Overall, only  Lime Energy (LIME) had what I would call “bad news,” when the company missed analysts’ estimates of earnings for the first quarter.  But even that was not particularly bad news, since the company has made good progress advancing its new utility-focused strategy.  Further, Lime raised money from it’s biggest shareholder (without having to give him a discount to the market price) in order to fund the faster-than-expected growth of the utility business.  LIME fell 9 percent in May.

With many of these companies trading at lower prices despite making advances in their underlying businesses, I added to my positions in several of these names this month (New Flyer (NFYEF), Accell (ACCEL.AS), Waste Management (WM), and Waterfurnace (TSX:WFI / WFIFF), in particular.)  Given the number of attractive opportunities within this list and elsewhere in clean energy, my focus has been on buying dividend-paying companies which I think will be able to increase or maintain fairly high dividends.

All four of the stock buys above pay over 4 percent dividends, as do several other acquisitions this month: Power REIT (PW), ABB (ABB), PFB Corp (TSX:PFB / PFBOF) and Potlatch (PCH).  These acquisitions are part of a long-term strategy to anchor my portfolio around a large block of reliable dividend-paying names which do not require as much attention as my more speculative clean energy picks.  (Note that all of these except WM, PW, and PCH are subject to foreign tax withholding, so they are better held in a taxable account, where the withheld tax can be usually be recovered through the Federal foreign tax credit.)