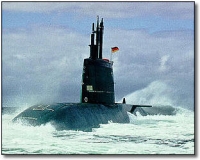 Under the name Papanikolis, Evangelia Vassiliki launched the first fuel cell submarine for export from Howaldtswerke-Deutsche Werft AG (HDW) in Kiel. The submarine, with the construction number 361, is a 214 Class submarine and has been built for the Greek Navy. The HDW group is building a total of four of these submarines for the Greek Navy. Of these, the first vessel is being built in Kiel and the subsequent vessels will be built at the HDW subsidiary company Hellenic Shipyards in Greece. The submarines are scheduled for delivery between 2005 and 2010.

Keil, Germany – May 11, 2004 [SolarAccess.com] The 214 Class of submarines is based on the successful construction principles of the 209 Class submarine, of which HDW have built more than 60 since 1960. It was improved by incorporating the innovations of the 212A Class submarine, principally the unique air-independent fuel cell propulsion system. This provides extremely increased underwater endurance. The minimized acoustic, thermal and magnetic signatures of the submarine provide an unbeatable degree of undetectability. Increased diving depth and overall efficiency provide new operational advantages. The vessel, with a displacement of 1,700 tons, is 65 meters long and is manned by a crew of 27. The propulsion is provided by a Siemens Permasyn engine which draws its power supply either from the fuel cells or from batteries which are fed by a diesel generator. Its armament consists of eight torpedo tubes. The vessel has an integrated sonar and weapons control system for navigation and for deployment in active military operations. The principal tasks of the vessel are reconnaissance, interception and surveillance. It is also capable of being deployed against surface vessels and submarines, for covert operations and for minelaying. The Greek Navy was the first foreign navy to order fuel cell submarines from HDW, in February 2000. It was also the first foreign navy to order Class 209 submarines for export from HDW in 1967. It now possesses eight of these vessels. Three of these are scheduled to be refitted at Hellenic Shipyards with a fuel cell propulsion system. Evangelia Vassiliki, who launched the vessel, is a student and a descendant of the Greek freedom fighter Dimitrios Papanikolis, who, as the very young captain of a tiny vessel, in the Greek War of Independence against the Turks in 1821, destroyed a Turkish battleship ten times the size of his own vessel.