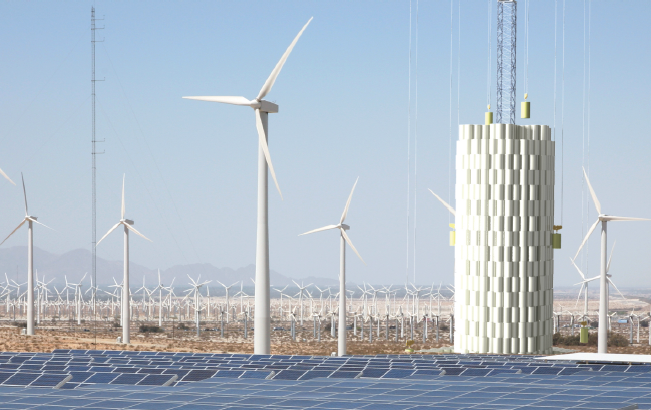 Earlier this month, Energy Vault, an Idealab company, announced the commercial availability of its energy storage solution that is based on the principles that underpin traditional gravity-based pumped hydro plants.

Energy Vault said in a press release that its new technology combines physics fundamentals of potential and kinetic energy with a cloud-based software platform to operate a newly developed six-arm crane. The crane operation is automated and moves massive concrete bricks that provide the basis for the storage and discharge of electricity.

Energy Vault said that material is a “low cost waste debris concrete,” which enables the system to achieve significantly lower cost per kilowatt-hour and high round trip efficiency while delivering a 30-40 year life without any degradation in storage capacity.

The company also announced a technology and commercial partnership with CEMEX Research Group AG that will focus on material applications which include the optimization of various concrete based composite materials that will support Energy Vault’s system deployments globally.

Energy Vault’s technology was inspired by pumped hydro plants that rely on the power of gravity and the movement of water to store and discharge electricity. The company’s solution is based on the same fundamentals but replaces the water with concrete bricks.

The large bricks are combined with Energy Vault’s system design and algorithm-based software, which calibrates the energy storage tower and electricity charge/discharge while accounting for a variety of factors including power supply and demand volatility, weather and wind.

As a result, the company said it can deliver all the benefits of a pumped hydro system, but at a much lower price, higher round trip efficiency and without the requirement for specific land topography and negative environmental or wildlife impacts.

Specifics of the system include:

Further bolstering its eco-friendly advantages over existing chemical storage solutions is the fact that Energy Vault’s storage conduit – the large concrete bricks – do not degrade over time and therefore eliminates the need for replacement equipment. Future systems will roughly double the amount of MWh energy storage capacity and peak power discharge while continuing to significantly reduce the cost.

“Innovation in energy storage represents the largest and most near term opportunity to accelerate renewable deployments and bring us closer to replacing fossil fuels as the primary source to meet the worlds’ continual growth in energy demand”, said Bill Gross, founder, Idealab, and co-founder, Energy Vault.  “We’re excited to support Energy Vault in bringing this groundbreaking technology to the market.”

As part of its efforts to rapidly bring projects to market, Energy Vault has initial agreements with customers on multiple continents.