Today SolarReserve’s 110-MW capacity Crescent Dunes project in Nevada, which combines power towers with molten salt storage, just announced that it has entered its “commissioning phase.” They’re still fuzzy about when it will be fully commercially online, phrasing it as “later in 2014,” but at full output Crescent Dunes will generate more than 500,000 MWh/year, more than twice the output per-MW-capacity of solar PV or direct-steam solar thermal, the company claims. The plant has a 25-year power purchase agreement with NV Energy.

Meanwhile, tomorrow, February 13, the 392-MW Ivanpah concentrated solar power (CSP) project in California’s Mojave Desert, also a power-tower structure but without the storage component, will be officially dedicated. Celebrities include execs from the project’s creators NRG Energy, Bechtel, and Brightsource, and financial backers Google and the Department of Energy’s Loan Projects Office which provided a $1.6 billion loan guarantee. Energy Secretary Ernie Moniz is flying in to do the ceremonial honors. Grammy-nominated rock band The Fray, which used Ivanpah as the backdrop for their “Helios” album cover and a music video, reportedly will be performing. We’re awaiting more official info about Ivanpah’s official new status and will share what we receive.

What Does Commissioning Mean?

Ivanpah achieved “first sync” with the grid last September, and recently local reports proclaimed the site officially online as of in January according to California Energy Commission documentation. However, regular reports from the California Independent System Operator (CAISO) paint a rather more complicated picture of Ivanpah’s status, indicating that following a one-day spike in output early in January the site’s three power towers were partially curtailed or offline consistently all month. The state’s overall solar thermal operations also fell off a cliff but have recovered in the past week or so. (KCET’s Chris Clarke points out an inherent contradiction: those CAISO updates reflect operational status at the time the reports were generated in mid-afternoon, not necessarily meaning the plants were dark all day…but mid-afternoon is precisely when CSP ought to be running most smoothly.)

The process of commissioning any power plant means not simply dialing up to full power right away — it involves stretching the system’s legs, fine-tuning it in increments, seeing if everything is running properly and that the connections to the grid are proper, and adjusting whatever needs to be tweaked, a process that can take days, weeks, or even months until a plant gets fully cranked up and humming. “There are various and incremental testing stages and gate reviews that have to be met leading up to any facility’s full commissioning and commercial operation date,” acknowledged a NRG Energy spokesperson. At the same time, though, the long periods of unplanned downtime (even if it’s only part of the day) suggest that some major adjustments have been going on.

Crescent Dunes offers a bit more insight into the unique challenges involved with ramping up its CSP project:

Commissioning is the initial stage of bringing the project into operations and includes system-by-system verification and startup, as well as equipment calibration and testing. Commissioning activities underway at Crescent Dunes include energization of the utility interconnection system and other electrical systems, as well as the first stages of testing and calibration of the heliostat field. […] Full commissioning activities will also include startup of the demineralized water, air, steam, cooling and many other systems which are commonly found in traditional power plants. However, unlike traditional power plants, commissioning includes systems unique to Crescent Dunes such as a Heliostat Field Control System that will control and concentrate the sun’s energy and also the Molten Salt System that will harness, store and transform the sun’s energy into superheated steam, making this the most advanced solar power plant in the world. The facility also includes a dry cooled condenser in a hybrid configuration to minimize water use to levels well below that of conventional power plants. 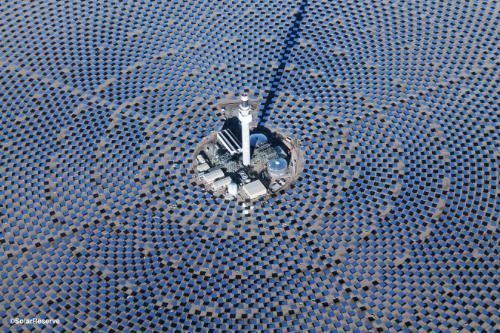 Ivanpah and Crescent Dunes are part of a wave of major CSP solar projects now coming online. Abengoa’s Solana CSP system across the border in Nevada completed commercial testing last fall after power staging through most of the year. The other major California CSP project on the boards, Brightsource and Abengoa’s 500-MW capacity Palen Solar Electric Generating System with two solar thermal power towers, continues to be delayed due to ongoing site assessments and concerns from the California Energy Commission, with the next round of discussions due later this spring. There are a few other solar CSP facilities operating in California, mostly single-digit MW capacity, but also the 354-MW Solar Energy Generating Systems (SEGS) in the Mojave Desert.