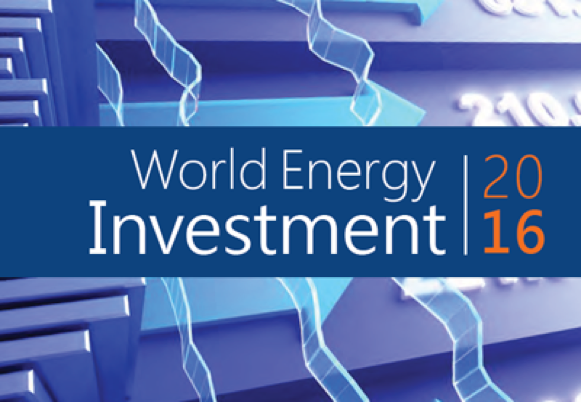 In a new report, the International Energy Agency (IEA) said that renewable energy occupied a 17 percent share of global energy investments in 2015, up slightly from 16 percent in 2014.

IEA reported that total global energy investment reached $1.83 trillion in 2015. Of the total, a majority 55 percent share was directed to fossil fuels (a decline from 61 percent in 2014).

In its report — World Energy Investment 2016 — IEA provided encouraging insights on the state of global investments in renewable energy and clear indication of worldwide trends supporting decarbonization of the energy sector and transition to a sustainable future.

The report emphasized, however, that despite commendable progress, investment in clean energy technologies must be increased yet further to assure stabilization of the climate.

IEA Executive Director Fatih Birol said: “We see a broad shift of spending toward cleaner energy, often as a result of government policies. Our report clearly shows that such government measures can work, and are key to a successful energy transition. But while some progress has been achieved, investors need clarity and certainty from policy makers. Governments must not only maintain but heighten their commitment to achieve energy security and climate goals.” 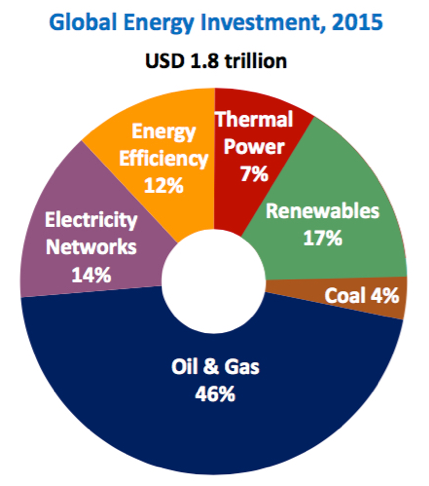 IEA said in its report that, considering spending on electricity generation in isolation, renewable energy generation systems accounted for the about 70 percent ($288 billion) of total expenditure ($420 billion). Total spending on all renewable energy sources — including biofuels for transport and solar thermal heat installations — amounted to $313 billion.

Professor Rolf Wüstenhagen, a prominent renewable energy market analyst and head of the Chair for Renewable Energy Management, University of St. Gallen, provided his perspective on the report to Renewable Energy World: “You can see the glass as half full or half empty. To see the shift in investments from non-renewable to renewable energy is good news, of course. But given the urgency of the climate challenge, it’s still disappointing to see that more than half of all investment is going into non-renewable, fossil fuels.”

He noted that, in the power sector, roughly two thirds of investment is going into renewables, leaving a remaining one third for other resources.

“The transition has started, but it’s perhaps slower than we might think, or want,” he said.

An interesting conclusion of the report relating to renewable generating capacity was that between 2011 and 2015, while spending remained relatively flat, investments yielded 40 percent greater capacity additions and generated a third more power. 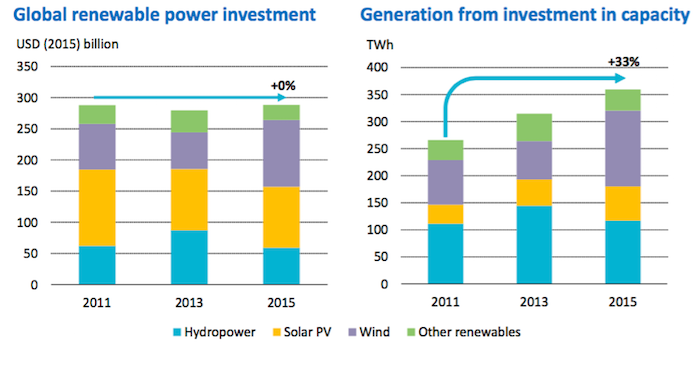 “This [finding] is remarkable,” Wüstenhagen said. “Investments have been flat, but output has increased by one third. It’s mainly the result of strong cost reductions across renewable technologies, especially in offshore wind. The same amount of money provides more kilowatt hours — this is very good news.”

Still, he added, it would be more encouraging to see more money flowing into renewables.

“I think it’s one of the remaining puzzles: why investment itself hasn’t increased?” he asked. “Indeed, providing an understanding to this question is important for the future.”

Reflecting on contributions from differing sources of renewable power, Wüstenhagen said that the growth in wind power investment in 2015 is encouraging. That growth, he noted is driven by continued technology development and attractive policy environments in the top three global markets — China, U.S. and Germany.

“Comparatively, the picture for solar photovoltaics is more mixed,” he said. “While China and Japan saw record-levels of new capacity additions in 2015 and these two countries accounted for half of global PV investments, many traditional PV markets in Europe stayed below expectations. In these markets, solar is somewhat caught between the earlier government-driven growth and a self-sustaining market of the future.”

After more than a decade of growth in solar power, he added, investors in markets, such as Germany and Italy, are now faced with increasing levels of policy risk.

“A similar development can be seen in the UK, which has experienced the strongest PV growth across Europe in 2015 but is now caught in controversy around the future of solar policy,” he said.

The IEA also found that investments in renewable power capacity through 2015 generated more than enough to cover growth in global electricity demand.

Tangential to renewable energy, investment in grid-scale battery storage was reported to have expanded tenfold since 2010. 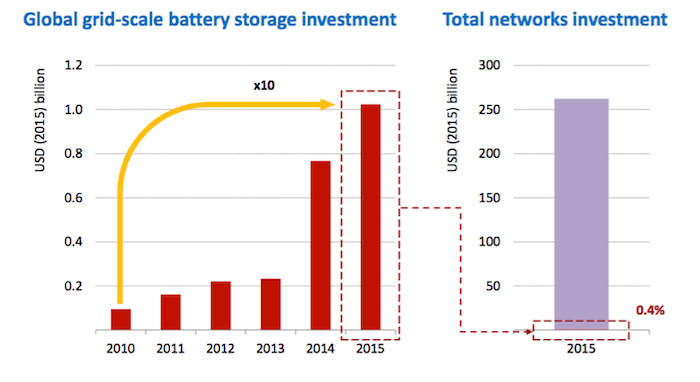 Wüstenhagen views investment in electrical systems as encouraging too, saying, “it’s an often under-stated part of the transition to renewables. I find it remarkable that investment into grid-scale battery storage went up by a factor of 10 between 2010 and 2015. This reflects the growing importance of grid integration and storage in electricity systems with high shares of solar and wind.”

He noted that, while people tend to think of grid investment in terms of transmission lines, “much of it is actually in upgrading distribution networks to integrate higher shares of renewables — with the larger trend of decentralized power production, this is where investment is required.”

Europe, Wüstenhagen said, has had considerable successes in this context.

“Market coupling between European countries has proven very useful and cost-effective,” he said. “Managing grids in coordinated fashion — pooling resources — can mean savings compared to attempting to manage high shares of renewables on an individual basis. Of course these are not just economic issues; there’s a significant political component too, and that can hold back development.”

Unsurprisingly, China was found to be recipient of most renewables-based power capacity investment at $90 billion; an amount representing over 60 percent of the nation’s total investment in power generation in 2015.

Chinese investment in wind power exceeded that of hydropower; a first for the nation. China also led in investments in solar thermal heating installations via $15 billion.

There is especially encouraging news from the US and EU.

In the U.S., renewable electricity investment through 2015 was close to $40 billion, and represented almost 90 percent of investment in generation capacity.

Comparable figures for the EU reveal $55 billion constituted some 85 percent of Europe’s generation investments. Wind power accounted for over one half of that amount.

“After the 2015 Paris agreement, this report is a first piece in the puzzle of an emerging lower-carbon energy investment landscape,” Wüstenhagen said. “On the other hand, it also clearly reflects the fact that overcoming path dependence, the tendency of human decision-makers to stick to the status quo, is a non-trivial endeavor.”

He added: “In the current transition period, consistent government policies may actually be just as important as they were in the early days of renewable energy investment.”