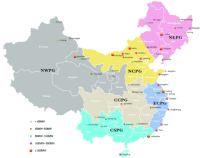 The global energy and environment challenges cannot be addressed through a local, regional, or even a national approach. They require a global outlook and a much broader vision, a Global Renewable Energy Grid [GREG]. A high voltage direct current [HVDC] transmission system must be built to serve as the bulk electrical power transport medium, with centralized energy storage facilities placed within GREG as needed. And perhaps most importantly, the set of socio-political overseeing institutions from each of the world’s nations needs to network together and administer just as seamlessly as the physical grid.

The obstacles to such a major global shift can be categorized as technical, economic and socio-political, with the socio-political challenges being the toughest. Researchers such as those at Stanford University have shown that adequate renewable energy resources exist to power the planet, but a detailed and comprehensive proposal for a global energy network has yet to take shape: regional planners need to combine their efforts before this can be achieved.  Likewise, complete and clear rules on how to pay for a global energy grid must be established.  This would require top energy administrators in each participant nation to come together under an umbrella organization at the United Nations.

After a brief overview of energy economics along with political obstacles, we offer technological suggestions as to how a global grid might be implemented.  HVDC transmission is recommended as a clear choice for most efficient and reliable long-distance delivery of electrical power 24/7/52.  And centralized storage mega-plants are proposed for balancing supply and demand across a network of mostly intermittent sources.

If we are to address the rapidly deteriorating climate due to fossil fuel power plants, then creation of a Global Renewable Energy Grid is critical enough to warrant our highest priority.  The United States, for example, invested judiciously in its interstate highway system starting in the 1950s. The rapid growth of the US economy, centered on road transportation after the second world war, can be directly attributed to this highway infrastructure.  Similarly, the “Dotcom” boom of the nineteen nineties can be directly linked to the wired and wireless global electronic highway.  Therefore, we need not wonder whether our economies can afford the GREG.  We must recognize that global economies would actually expand and get stronger because of it.

With today’s sluggish world economy and massive public debts, it may be questionable for all nations to commit to GREG with urgency.  Therefore, a mix of public and private investments would be needed to implement the project.  All nations will have to share responsibility and commitment to create an environment for renewable resources to flourish and for building their respective parts of the transmission network.  Just as highway networks for transportation of people and products are at the foundation of national and global economies, and belong to the public, so must the power grid for transmission of electrical energy be in the public domain.   While war machines destroy economies, GREG would build economies around the world, requiring only a small fraction of budgets now reserved for sophisticated , expensive weapons of war.

Construction of any global, high-voltage, high-power grid [GREG] would require comprehensive analysis of its socio-economic benefits.  Increased electrical reliability and efficiency should be included as quantifiable advantages.  However, if we are to address the challenge of global warming and CO2 emissions, then the design alternatives should be evaluated in thermal and emission units, not in monetary units manipulated by a handful of bankers.  Since GREG would eventuallfy lower the energy costs for all nations, the projected cost of electricity to all consumers would substantially decline over the long term.

Public funds committed for GREG will have to be hashed out in the halls of national governments, and in the board rooms of world development banks.  Recall that the US Interstate Highway system was funded through a Trust Fund built through a special gasoline tax.  A similar approach would be needed at the United Nations level, with a global “GREG Trust Fund” built on levies rendered for carbon content of all fossil fuels produced.  In addition, a small [1-2 percent] global tax on all weapons produced could be imposed. 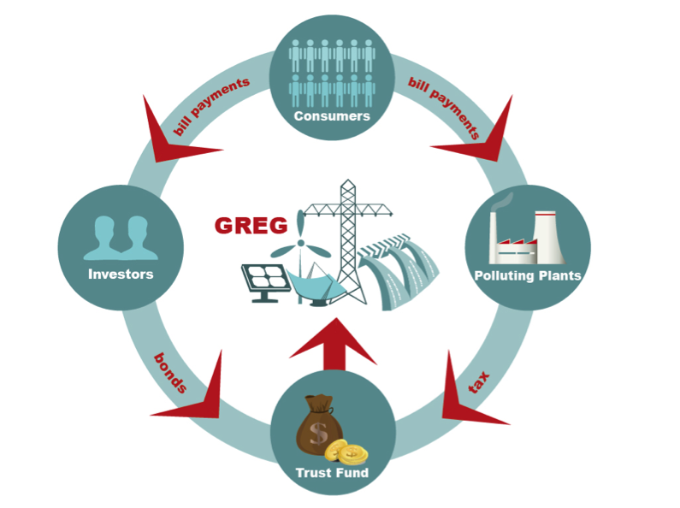 The most formidable obstacles to creating GREG lie in the socio-political realm.  But  corporations deeply invested in fossil fuel energy will oppose the change.  Top energy administrators must prioritize social responsability, not maximization of ROI, when planning the transition to renewables.  Policy makers will have to regulate based on long-term objectives, while acknowledging possible conflicts among regional operators, and between producers and consumers in the short-term.  Right-of-ways, electricity markets and pricing will be considered acknowledging the varied interests of producers, utilities, system operators and prosumers [customers with their own wind and solar generators].

After committing to a domestic RE-grid, all countries will need to seek a balance between national and global interests.  Electricity sharing arrangements, placement of transmission interconnects, security concerns and reliability issues are all paramount.  The extent to which wealthy countries will assist developing countries must also be established.  Here emerges a requirement for oversight and dispute resolution from an international body not partisan to any particular nation such as a United Nations Renewable Energy Organization. 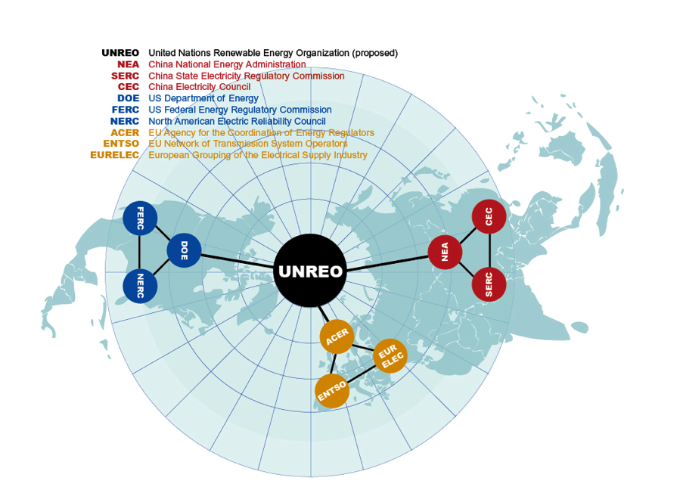 Instant delivery of electrical power from multitudes of inter-connected plants to a multitude of loads is figuratively and literally a “high wire balancing act.”  When a light switch is turned ON, the set of electrons required to flow through the filament of the bulb must be instantaneously balanced by an equal set of electrons produced at a generator.  Similarly, when electrons are produced by a generator, they must either flow into a load or into a storage device connected somewhere to that grid.  With such a complicated system, “The Interconnect” supplying power to millions of people is indeed a marvel of technology.  But unlike natural gas, petroleum and nuclear materials, alternating current [AC] electricity is not a commodity.

Electrical energy, except in the electrostatic form, neither exists in nature nor can it be utilized directly.  It is a means to transport energy found in fossil fuels, nuclear materials, flowing waters, blowing winds and solar rays to homes, buildings and factories.  That is, AC electrical energy is a transportation medium and not a commodity in itself.  Over the last one hundred years, the world has adopted electrical conductors as the means to guide the flow of electrons.  It is an alternative to trucks, trains, and hydraulic or pneumatic pipes.  Transmission lines resemble highways, with electrons replacing petroleum trucks or natural gas pipes.  And just as fluids and gases flow from higher pressure to lower pressure, electricity flows from a higher potential at one end of a wire to lower potential at the other.  However, unlike pressure in fluid and gas pipes, electric potential can be reversed instantaneously.

So as highways and rail lines need to be upgraded to keep up with ever changing populations, power grids should also be enhanced continually.  And as the world tries to address its environmental challenges via wind and solar, a globalized grid structure [GREG] must be created through a carefully designed HVDC network.

GREG will require hundreds of long distance transmission lines, including undersea cables.   HVDC has been shown to be the technology of choice for distances greater than 600km due to superior voltage quality, loss reduction and better power flow control.

In addition, to guarantee load balancing, energy storage facilities must be constructed at select points within the network.  Existing storage technologies include pumped hydro, fuel cell, compressed air, batteries, superconductors, supercapacitors and flywheels.            A centralized strategy places megaplants at optimal locations, allowing resource-sharing and economies of scale without relying on a parallel market (such as in hydrogen).

Installing energy storage is dependent on geography and geology.  All available storage methods will be employed where appropriate (e.g. compressed air where there is a naturally occurring canyon).  Hydroelectric power plants will need only to modify their dispatch schedules in order to serve a storage function.  And pure pumped hydro storage plants, despite their high cost, offer massive potential in terms of energy retained.  For areas with scarce water, modularized fuel cell megaplants can be placed at optimal locations, dependent on land-use rights and topology.

With greater extent of integration among global intermittent sources, the energy storage requirement will be lessened.  University at Buffalo’s 2009 Wind Power Study, which places hypothetical 3MW turbines at select locations during an arbitrary sample month, offers an indication of the reduced storage requirement. 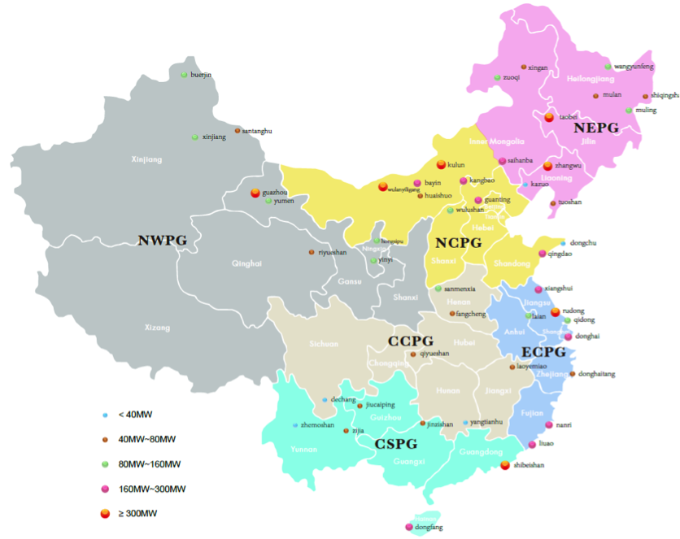 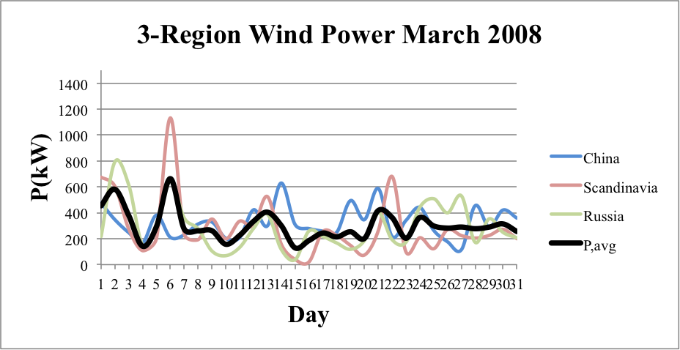 When operating separately, China, Russia and Scandinavia would have to store 6.4% of all wind energy generated.  Together, the three regions need to store 3.9 percent, a reduction of 2.5 percent or 5.6 MWh/turbine-month.

For any extent of grid integration, an all-renewables grid will still require some amount of energy storage.  Suppose, for example, that in the near future 20TW of renewable power capacity has been installed worldwide.  At 20% average capacity, a 3% storage requirement suggests 900 million MWh deliverable monthly.

As the world’s nations continue implementing their own bottom-up strategies for transition to renewable energy, a centralized, top-down regulation and approval process must emerge to bind them together.  While each nation will be responsible for funding its infrastructure, wealthier countries will need to support power industry reform in less well-off regions.  Researchers in both industry and at universities must also come together across political bounds, combining the best elements of long-term energy planning into a unified global vision.

Dr. Mohammed Safiuddin is Research Professor Emeritus at the State University of New York at Buffalo and President of STS International, an engineering consulting firm in Amherst, NY.

Robert Finton is a Ph.D. candidate in electrical power systems at the State University of New York at Buffalo.