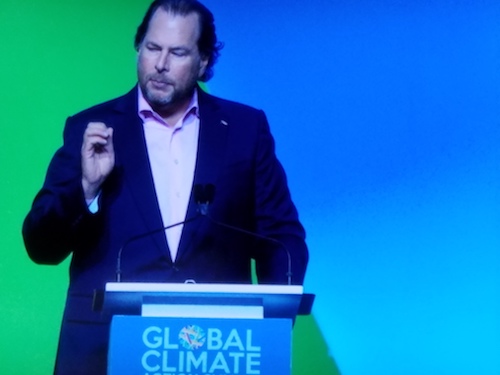 On the premise that the nations of the world are not doing enough to meet the goals of the 2015 Paris Climate Agreement, Governor Jerry Brown, New York City’s former Mayor Michael Bloomberg and other dignitaries convened a high-profile international gathering in San Francisco September 12-14 to inspire more ambitious action and showcase successful efforts.

Organizers of the meeting sought to strengthen efforts so that global greenhouse gas emissions begin trending down by 2020 with the overall goal of keeping global temperature increases to1.5°C if possible and by no more than 2° C as called for by the Paris Agreement.

In addition, well over 300 related climate events are also being held by other organizations in San Francisco. Organizers intend to celebrate achievements and announce new commitments from all sectors of society. The Summit will culminate in a call to action to be delivered to the UN General Assembly and to the next global climate meeting (COP24) set for Katowice, Poland. 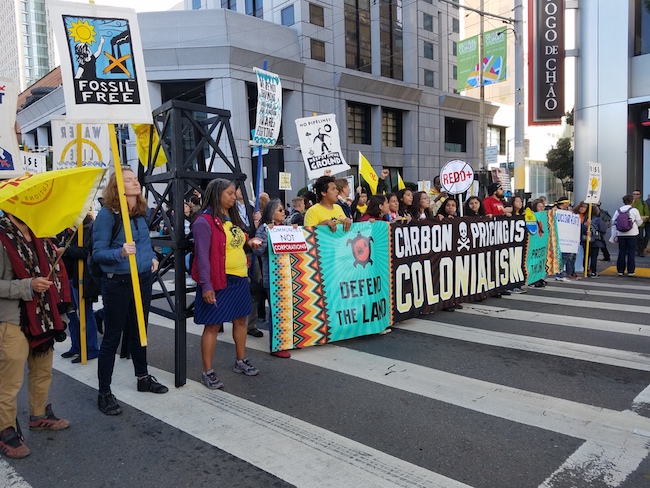 Image caption: Demonstrators September 13th in the streets of San Francisco near the Global Climate Action Summit protesting California Governor Jerry Brown’s reluctance to support a ban on fracking and a phase out of oil production in California. (Credit: John. J. Berger)

Conference organizers are calling on people from around the world to “take ambition to the next level across five challenge areas,” which are healthy energy systems, inclusive economic growth, sustainable communities, land and ocean stewardship, along with transformative climate investments.

Speaking at a press conference at the Summit hosted by C40 Cities and the Global Covenant of Mayors for Climate & Energy, Mayor Bloomberg said people are taking action on climate change because the same steps that help reduce carbon emissions also make cities better places to live and to work.

“People — surprise, surprise — want to breathe clean air,” he said. “They want mass transit options and streets that are safe for walking and biking. They want more parks and they want more trees.

“They want to save money through energy efficiency and they want access to clean energy sources. All these steps reduce carbon emissions. They also help cities attract new residents and businesses.

“[In New York City], we were able to cut carbon emissions by nearly 20 percent in just six years, and the steps we took to get there also made our air cleaner than it had been in a quarter of a century. At the same time, we were able to create a record number of jobs.

“Now other cities around the world are achieving similar results,” he said.

Largely through the actions of the U.S. cities from red and blue states belonging to the C40 cities coalition, Bloomberg said, the United States has reduced emissions more than any other large nation in the past decade.

“In fact, last year,” he added, “U.S. emissions fell to their lowest level in 25 years without any help from Washington.”

“The U.S is already half-way to the commitment we made in Washington [to meet our Paris Agreement commitment], and they will make sure that we will get the rest of the way no matter what happens in Washington.”

Cities account for 70 percent of the world’s greenhouse gas emissions, he said.

“The path to victory,” in cutting greenhouse gas emissions “really must go through cities” he said.

Bloomberg’s plenary speech at the Summit was interrupted by demonstrators shouting, “Our air is not for sale,” to protest carbon trading, which allows polluters to buy carbon emission permits. These can be used to allow refineries and other fossil fuel facilities to keep polluting so long as they reduce pollution more inexpensively elsewhere.

Although Governor Jerry Brown by Executive Order earlier this week set California on the path to carbon-free energy by 2045 and was instrumental with Bloomberg in organizing today’s conference, demonstrators protesting his failure to oppose fracking in California blocked a major intersection just outside the conference.