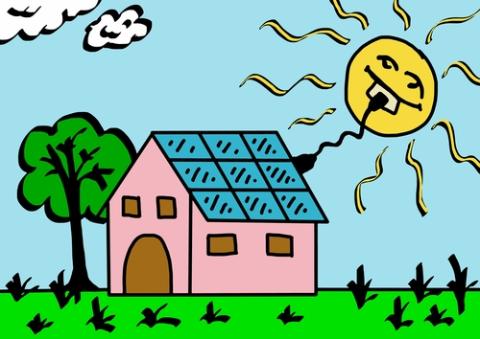 SAN FRANCISCO — David Greene woke up one day and fired his power company. It wasn’t that hard to do. Greene, 48, is neither a hippie nor a survivalist and his environmental leanings are middle of the road. He runs an air conditioning repair service out of his home and lives in the suburbs, not the woods.

It’s just that his three-bedroom house near Honolulu is in a place with America’s highest electricity rates — 38 cents a kilowatt-hour compared with the 13-cent national average. Fed up, Greene put solar panels on his roof and batteries in the garage to store the excess juice. He told his utility to come get his power meter.

“I enjoy being off the grid,” Greene said. “It’s an independence thing. It’s cool to say you don’t have an electric bill.”

Even better, Greene calculates he’s spent about $58,000 on a system that will pay for itself in six to eight years — factoring in that he now mostly avoids gas stations by charging his hybrid Toyota Prius from the rooftop solar system.

Greene remains something of an outlier. While there are no official U.S. government estimates of how many Americans live off the power grid, the Snowmass, Colorado-based Rocky Mountain Institute says anecdotal evidence suggests it’s much less than one percent of the nation’s utility customers. About 147 million people get their power from the grid, according to data from the American PublicPower Association.

“Over time, many U.S. customers could partially or completely eliminate their usage of the power grid,” Morgan Stanley analysts Stephen Byrd and Timothy Radcliff wrote in a July report.

Greene’s liberation is possible because it’s a propitious moment in the rooftop solar revolution. The technology is moving into do-it-yourself territory and prices have plunged 64 percent since 2010, according to the Solar Energy Industries Association. You can now buy solar panels at Ikea.

“It is no longer a sign of a hippie to have solar panels, it’s the sign of a savvy homeowner,” said the Rocky Mountain Institute’s Leia Guccione.

While the cost of solar-tied home storage batteries remains uneconomical in states with low powerprices, such as Louisiana and West Virginia, that also may change. One barometer is that the price of batteries powering electric vehicles has dropped by a third since 2011 and may slide another 45 percent by 2022, according to Bloomberg New Energy Finance.

The situation in Hawaii, where Hawaiian Electric Co., the state’s major utility, burns fuel oil to generate the nation’s most expensive electricity, makes it ripe for defectors. Mom-and-pop solar companies have already begun to do for some consumers what Greene has done for himself.

High-cost power states like California and New York may, within a decade, also see a surge in home solar-battery installations like Greene’s that give consumers the ability to cut the cord, according to the Rocky Mountain Institute, which studies energy efficiency.

Companies such as SolarCity Corp. and SunPower Corp. are already undercutting the notion that utilities are the only game in town, with solar-and-battery packages that make them de facto powercompanies.

Homeowners aren’t the only ones seeking to sever ties with the grid. On the big island of Hawaii, the 130,000-acre Parker Ranch is considering a plan to bypass its utility by building a microgrid with wind farms and hydroelectric plants for its operations and the nearby town. “We can beat the utility’s rates,” said Neil “Dutch” Kuyper, chief executive officer of the ranch.

Hawaiian Electric is aware of this dynamic. The utility said it hopes to cut rates by 20 percent over the next 15 years by increasing its deployment of renewable energy to 65 percent of its power mix.

As for Dave Greene, his passion for solar has never been about saving the planet. He’s a lifelong tinkerer who remembers as a kid putting together electronic kits with solar-cells he bought at Radio Shack. Later, he built turbo-charged cars and raced them on remote streets around Honolulu until an engine blew up and he refocused on less hazardous hobbies.

Greene honed his electrical skills in the U.S. Army, where he trained intelligence officers in powergeneration and equipment repair. When he bought his first condominium in suburban Honolulu in 1989, he installed solar panels on a backyard shed and hooked them to golf cart batteries to see how much power he could generate.

The answer was not much. Solar back then was still considered space-age technology — panels were expensive and inefficient by today’s standards — and Greene figures he blew about $2,800 on that solar lark. “I try not to think about how much I paid,” he said. “Cost matters not when it’s your hobby.”

When he moved to his current three-bedroom home about 15 years ago, he brought the solar system with him. His business repairing air conditioners and swimming-pool pumps was going well, so he had a little extra money to expand the setup.

More than two years ago he realized two things: His utility bills were astronomical, and solar had become mainstream and far more affordable. He did some quick calculations and realized his long-held fantasy — to stop writing big monthly checks to HECO, as the company is known — was in reach.

There were issues, both domestic and technical. Greene’s wife, Leihulu, 48, had borne his solar hobby with good grace, but the leap from the grid seemed risky. She had her own hobby, making pottery and ceramics with an electric kiln, which gobbles a huge amount of power.

She issued an ultimatum: “You can’t get off the grid until you can run my kiln,” she told him.

The kiln wasn’t the only challenge. The house sits near a gulch that blocks the island breezes in sultry Oahu, and to stay cool the Greenes run electricity-sucking air conditioners almost around the clock. Their two teenage daughters like to watch movies on the flat-screen TV, play games on their Sony PlayStation, run their aquariums and fire up their laptop at all hours.

At that point, nobody was much interested in giving up their lifestyle for Greene’s obsession. “It’s not uncommon for my wife to have two microwave ovens running at once while the TV is on and both washer and dryer are running while she’s brewing tea in the coffee maker,” he said. “If she can’t do all of the above, she gets irate.”

So Greene converted a stove and clothes dryer to run on propane. He put in energy-sipping LED lights. He rigged up a separate solar cell and battery system for charging mobile phones and powering outdoor lights, alarm clocks and bedside fans. And he installed a solar-powered hot water heater.

Then he reinforced the central power network, adding more solar panels to his roof. He spent $8,000 on industrial-sized nickel-iron batteries that he thought would last longer than the lead-acid batteries he was using. His goal: to store enough extra solar power to last through the night and cloudy days.

In the end, nearly every inch of roof that sees sunshine was covered in panels. There are more panels on the slope of his backyard. A room off the garage resembles a mini-transformer station with wires snaking out of control panels and knee-high industrial batteries lining the floor.

When all was ready, the Greenes took the plunge in March 2013. Hawaiian Electric removed the meter from the side of his house, leaving an empty hole with a white tag that reads “meter locked.”

HECO estimates that only a handful of customers have done what Greene has done. “As batteries become more affordable, it may allow more people to leave the grid, but we don’t expect it to be a big factor,” said Peter Rosegg, a company spokesman.

Greene has spent a lot of time fine-tuning his system. The expensive new batteries didn’t store as much electricity as he’d hoped. Even with all his power-bolstering and efficiency measures, the air conditioners taxed the system, running down the batteries until the family was left without powersome days.

There were mornings when there was no electricity for the coffee maker or the microwave. More than once, Greene’s teenage daughter Sabina said she dressed for school in the dark.

Now things are running more smoothly. He’s added a backup gas generator that fires up automatically when power gets too low. He rigged the air conditioner to shut down before overtaxing his system. And he installed another set of jumbo batteries for $18,000 that he says is doing a better job of storing electricity from the solar panels.

Greene said he also set up his Prius to charge mostly from the rooftop solar system.

The family has also adjusted its energy habits. On some sunny days, Leihulu will dash home during her lunch break to run the washing machine, taking advantage of excess power churning out of the solar panels.

As for her pottery kiln, she can use it only if the family agrees not to run the air conditioning, microwave or other power-sucking devices. Otherwise, “Poof! Everything goes off,” she said.

Despite all this, Greene is ecstatic that he made the move. And it’s not just about the money — it was also the challenge of being a pioneer. “I choose to go to the moon,” he said, “not to be mediocre.”

As for Leihulu, she’s slowly become a convert. And when battery technology improves to the point that they can store two to three times the energy as they do now, HECO may see a mass defection, in her opinion. “A lot of people are going to do the exact same thing Dave is doing and will go off thegrid,” she said.