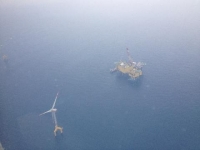 BERLIN — As part of a preview of this fall’s WindEnergy expo in Hamburg, officials from Hamburg Messe whisked a group of international journalists around the region to see wind energy companies and projects in action, putting the nation’s momentum and support for renewables on display.

Following a press conference and panel discussion with German wind energy experts, we traveled to E.ON’s under-construction WindGas Hamburg 1-MW power-to-gas pilot facility in Hamburg-Reitbrook, where it is developing next-generation proton-exchange-membrane (PEM) electrolysis. Transportation to the site was by hydrogen fuel-cell bus, one of only 30 in all of Europe, and four in Germany — all located in Hamburg, which wants all of its buses to be zero-emissions within 20 years. (But with utmost fiscal responsibility, of course; “we’re a trader city,” one of our local tour leaders explained, “we know how to cut a deal.”)

Andrei Zschocke, head of technical innovation for E.ON’s Innovation Center Energy Storage business, described the increasing intersections between power, heat, and gas, from generation sources (renewables to power, gas and coal to power/heat) to the “transformation” of power to power, power to gas, and power to heat. The industry needs to “build bridges among these systems,” he said. Power-to-gas, he explained, solves two problems, transferring surplus renewable energy into hydrogen that can “respond in seconds” to grid needs.

The company’s other power-to-gas center, a 2-MW pilot plant in Falkenhagen with Swissgas has shown 66 percent efficiency at first phase, though when converting back to power one must multiply by the generation source’s turbine/cell’s efficiency (typically <40 percent). But that 66 percent efficiency number is actually conservative since it was built using off-the-shelf components that weren’t optimized, and the company thinks its Reitbrook project “can go up much higher,” explained René Schoof, head of energy storage technology at E.ON Gas Storage. Here its targets are a 1-MW stack and 80 percent efficiency at the stack level, with hydrogen production of 265 m³ — and no need for a compressor as the the gas is injected at 25 bar directly into Hamburg’s distribution grid. Schoof noted regulations limit the hydrogen mix in the system to “one digit” (up to 9.9 percent), though further transformed into methane that number would go much higher with “very efficient transport capacities.”

E.ON is targeting two market segments now in its power-to-gas business: mobility (e.g. vehicles, like the bus we arrived in) and “industry.” Power-to-power applications aren’t ready yet, Zschocke noted, emphasizing that “industry and end consumer markets are more interesting.” Construction at Reitbrook began at the end of March, first PEM deliveries and commissioning are anticipated by year’s end, and the first-year test operation should begin in early 2015. Funding is from Germany’s Transportation/Infrastructure ministry (BMVI) and a number of partners, including Hydrogenics (PEM), Solvicore (membranes), Project Management Jülich, and Fraunhofer ISE. Of paramount importance is getting exemptions from various fees, including grid connections, admitted Schoof: “Otherwise we cannot get into the market.”

PEM electrolysis isn’t the only thing cooking at the E.ON Reitbrook site. Outside near the parking lot are two arrangements of microalgae biogas systems in partnership with Subitec, one of them rigged to a single-axis solar tracking system to boost its efficiency — though still nowhere near commercial-scale. 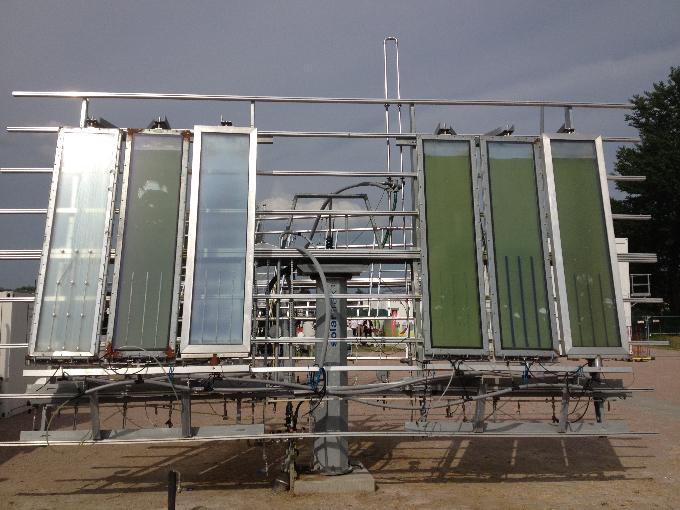 Microalgae biogas system sitting in the sun at E.ON’s Reitbrook facility, affixed to a solar tracker.

From E.ON we drove back to Hamburg and circuitously to the container terminal for logistics company Eurogate, where a Nordex N117/2400 wind turbine has been running since last August. The turbine sits on a 141-meter hybrid tower (concrete and tubular steel), and is an impressively tight fit among the surrounding tall rows of shipping containers, but it’s especially tall to avoid any wind-altering affect from them, assured Nordex spokesperson Felix Losada. The turbine gets about 20 percent more energy than the company’s previous turbines, with roughly 40 percent capacity factor. Since last August the turbine has generated about 7 million kWh entirely for Eurogate’s on-site operations, and the company hopes to hit nearly 9 million kWh by the one-year mark, but optimistically up to 10 million kWh — enough for up to half its electricity requirements, according to Gordon Friza, Eurogate’s renewable energy project coordinator. 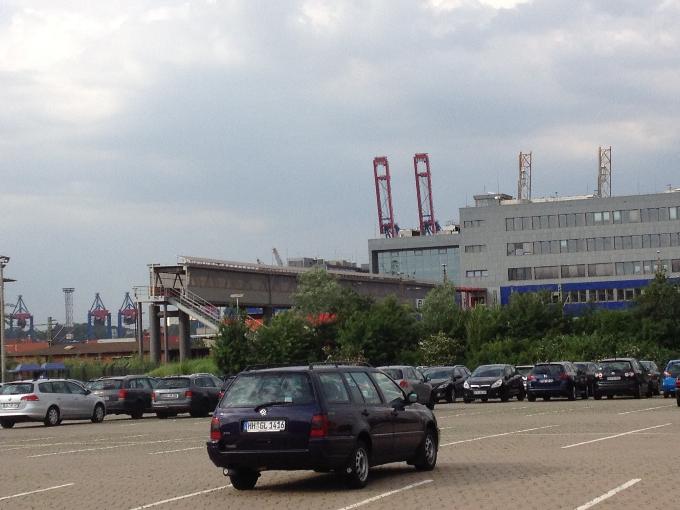 Facing the Eurogate terminal building with the wind turbine to our backs. One of the facility’s solar PV arrays stretches along the walkway canopy.

Eurogate is very renewable energy-minded; it also has two solar PV arrays at this terminal location (total around 30 kW), plus biomass pellet heating for hot water. Collectively they all meet about two-thirds of the terminal’s energy needs. The company also is exploring energy efficiency measures to reduce its usage, Friza added.

The final day of our Hamburg-area trip began with an early-morning coach ride out to the coastal city of Bremerhaven and Senvion’s turbine plant, which was opened in 2008 to extend its work into 5- to 6-MW turbines. The company now has 108 of those 5- to 6-MW turbines up and running and plans to deliver another 53 this year, most of which are destined for the Nordsea Ost site, said Norbert Geise, head of offshore wind development. First shipments are to begin later this year for its next prototype turbine, the 6.2-MW/152 third-gen turbine, which he dubbed “Big Baby” — the swept area increased 50 percent to roughly three football pitches. 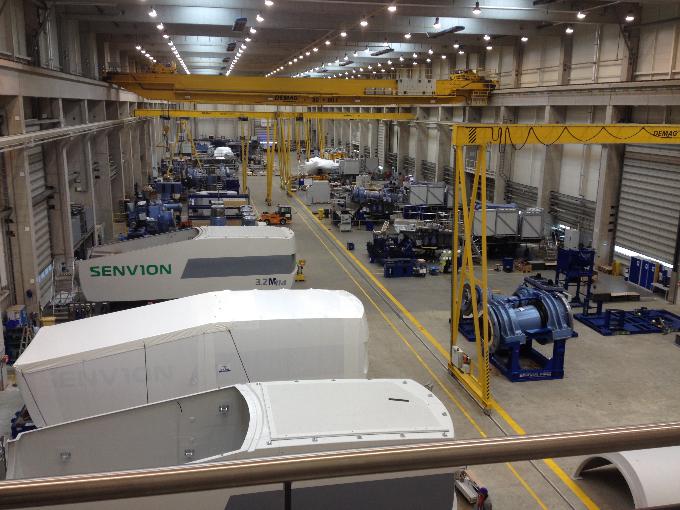 Inside the Senvion turbine factory in Bremerhaven, lined with both 3-MW and 6-MW components.

Geise explained that to offset a recent ebb in Germany’s offshore wind momentum the plant has taken on onshore work, which now counts for about 80 percent of its work. The site already has sold out its 3-MW turbines through the end of this year and is working two shifts. With offshore wind demand ramping up again, he expects that mix to shift to as much as 60 percent offshore work, with order fulfillments picking up “over the winter period” into early 2015. He also noted the logistical challenges of supplying such enormous offshore wind turbine components, from tidal basins and locks too narrow for installation vessels, to the soft soil around the river discouraging even temporary placement of components awaiting transport, to a great need for more offshore wind test sites.

Geise expressed optimism for Germany’s offshore wind market, which currently has around 600 MW installed and projects out to 10 GW by 2020, far below the nation’s original aims. Nevertheless he expects to see up to 3 GW by the end of 2015, though there may be hiccups in actual grid interconnection. Asked about growth markets outside of Europe, he noted Asia’s offshore markets have yet to really emerge; Shanghai’s wind energy outputs are half those seen in the North Sea or the U.K., Japan and Korea continue to show potential as does Taiwan, while the big market of China is not negotiating offshore projects, he said. He also observed that the U.S. has a “huge” onshore market but isn’t nearly ready to scale up its offshore wind sector to the point where suppliers can confidently invest there.

The final leg of our tour was a real treat: a turboprop flight to see some major offshore wind activity in action, viewing the 800-MW BorWin2 and 576-MW HelWin1 projects roughly 50 km and 85 km offshore, respectively. Both are part of five German offshore wind projects Siemens is involved with now, totaling 3.8 GW of capacity and sending power to shore via HVDC. Among the innovations being developed is drastically reducing the converter platform space requirement (such as tucking some of the gear and space underneath), part of overall cost reductions of up to 30-40 percent. 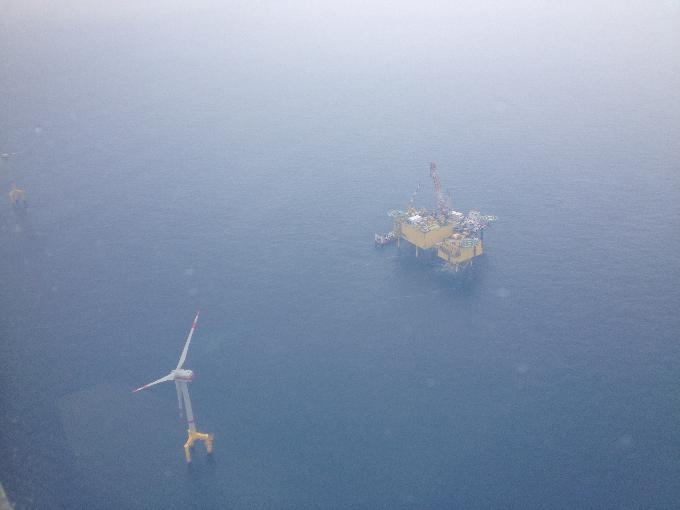 Flying over the Helwind offshore farm in the rain, appreciating the size and elegance of these massive machines.

HelWin1 is scheduled to begin commercial operation in the second half of this year, while BorWin2 is slated for the first half of 2015. Seeing these majestic structures up close, even in poor weather, was truly inspiring.